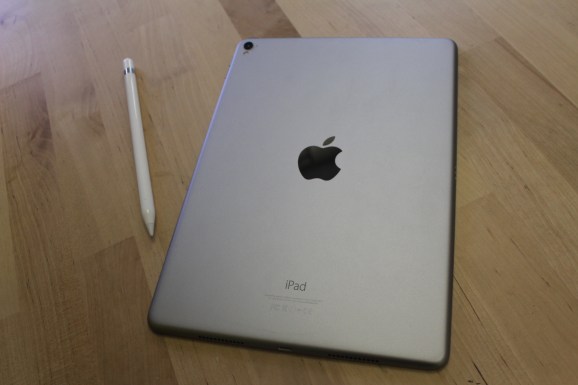 The rear of the iPad Pro, plus the original Apple Pencil.

There’s no question Apple has been working on a next-generation iPad Pro, and multiple reports have pegged 2018 as the year the tablet transitions away from the Touch ID Home button to an edge-to-edge screen with Face ID. Now 9to5Mac is reporting a few additional details ahead of Apple’s official announcement, which is expected to take place later this month.

The most interesting detail is that a redesigned version of the Apple Pencil stylus is on the way. Unlike the prior model, which awkwardly paired by plugging into the iPad’s Lightning port, the new Pencil will reportedly pair wirelessly using proximity to the iPad — just like AirPods and the HomePod.

While the report doesn’t say much more about the new Pencil, it notes that the new iPad Pro “will have a brand new connector for accessories,” identifying a previously rendered pill-shaped area on the tablet’s back as a “Magnetic Connector.” This flat connector has been depicted as sitting right above the iPad’s bottom port, which has historically been a Lightning port but which recent reports suggest will switch for the first time to USB-C.

Prior iPad Pro models have included a “Smart Connector,” capable of sharing both data and power with attached keyboard accessories. Given Apple’s track record with accessory and iPad introductions, there’s every reason to expect the company will have a Magnetic Connector-powered keyboard ready to show and that the new Pencil will be able to charge in a similar manner.

The 9to5Mac report also builds modestly on prior reports that the new iPad Pro will support 4K video output through its USB-C port. Apple is said to be adding a new Settings panel to “control resolution, HDR, brightness, and other settings” for external displays. Additionally, the Pro’s internal display will not be notched — instead, its surrounding bezels will remain thick enough to accommodate the TrueDepth camera system. As expected, Face ID is said to work in portrait and landscape orientations, but not upside down. Two Wi-Fi and two LTE models are expected for each of two device sizes.

Apple is expected to unveil the new iPad Pros alongside accessories and new Macs during a yet-to-be-announced October event. This year’s pre-event iPhone rumors and leaks turned out to be almost entirely accurate, except for relatively small details regarding accessories.