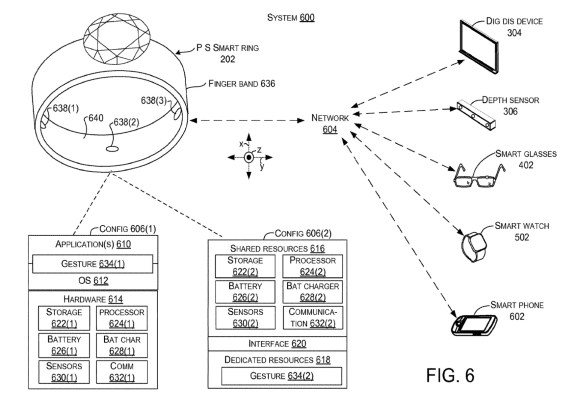 Microsoft’s wearable initiatives haven’t worked out so well — its wrist-mounted Band series of smart watches began to peter out just as early Apple Watches were gathering steam. But the company hasn’t stopped thinking about wearables, as a newly published patent application reveals a finger-mounted smart ring that could become a companion to Surface displays, smart glasses, smart phones, or smart watches.

Published on October 11, 2018, the patent application (via WindowsLatest) covers a “P S Smart Ring,” eventually explained to be a “pressure sensitive smart ring” embodied in a jewelry-like finger band with a surprising collection of hardware inside. Likely using yet-to-be-commercialized technology, the ring would include its own processor, storage, battery, wireless communications capabilities, sensors, and charger, potentially using a wireless induction coil.

Interestingly, the finger band’s small size would necessitate a tiny battery — 10mAh, or one-thirtieth the size of cells inside typical smart watches. Microsoft suggests that the ring could use an integrated NFC antenna to continuously harvest power from a nearby smartphone, eliminating the need to repeatedly remove the ring during the day for charging.

All of that hardware would power a gesture-based OS and applications. Microsoft envisions the finger band detecting internal tendon pressure coming from finger squeezes — the “pressure sensitive” part — as well as gestures including linear movements in cardinal and intercardinal directions, plus circular twists of the finger and hand. With the right software, it could even detect handwriting. Additional sensors could include anything from microphones to magnetometers, plus supplementary gyroscopes and accelerometers.

Using its wireless capabilities, the ring could be used as a controller for phones and various types of displays, enabling a depth-sensing display or smart glasses to better sense the user’s “touch” intentions. It could also work in sets: The patent contemplates users wearing anywhere from one to ten rings at once, depending on the need.

In theory, the ring could be equipped with enough sensors to be used as a health-tracking wearable, but the patent is focused almost exclusively on its use as a sophisticated remote control for other devices. Apple was reported to be working on a TV-controlling ring more than five years ago, but the accessory never panned out.

Continued advances in using depth-sensing and traditional cameras to interpret hand gestures raise the question of whether a “smart ring” is actually needed for such a purpose. But the fact that Microsoft filed for the patent on June 11 suggests that it continues to actively mull the role of hand-based wearables alongside its broader Surface and HoloLens initiatives.