Adblock Plus released version 3.4 today. That version number might not seem significant, but the improvements are: Adblock Plus 3.4 reduces memory usage by 50 percent. You can download the latest version here.

Adblock Plus is the world’s most popular ad-blocking tool, having passed 100 million active users back in May 2016. The tool is available for Chrome, Firefox, Internet Explorer, Safari, Edge (still in beta), Opera, Maxthon, and Yandex Browser. It’s also available on mobile for Samsung Internet, Safari, Firefox, and as its own Adblock Browser.

Version 3.4, however, is only available for Chrome, Firefox, and Opera. It’s not clear if the 50 percent figure is for all three platforms or just an overall estimate. Adblock Plus does say that the initial memory footprint has been reduced by about 16 percent, base memory usage has been cut by another 28 percent, and the memory used per frame has been slashed by about 660KB. 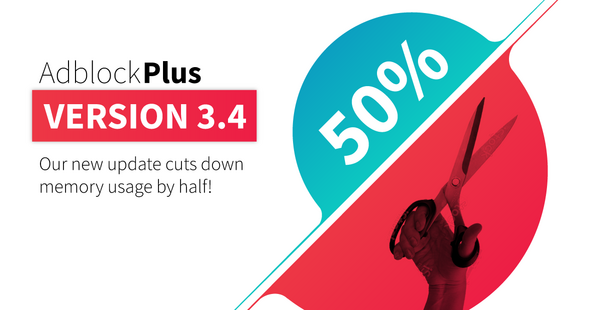 In addition to performance improvements, Adblock Plus 3.4 includes a design update and an improved issue reporter. The new user interface “brings a clean and modern aesthetic” — the first-run page, the icon popup, and the issue reporter all have new looks. The performance improvements are the real highlight, though; most users don’t really fiddle with the UI — they just set it and forget it.

That said, if you are a hardcore user, you will be happy to know that the issue reporter now includes a screenshot with each report. This should have been included from the start — when an ad somehow sneaks through, it makes sense to show it with a screenshot.

Eyeo, the Germany-based company behind the Adblock Plus software, has tried to leverage its userbase to change how content is monetized online. The company has an Acceptable Ads initiative, which selectively blocks advertising (on by default in Adblock Plus). Non-intrusive ads are allowed through in hopes of finding a compromise between users and advertisers.