Spotify’s paid users in Q3 rose only 5 percent from the previous quarter as the Swedish music streaming service continues to face heavy competition from Apple.

In the third quarter earnings report released today, the company says it now has 87 million paid subscribers, up from the 83 million it had at the end of June. Its total users, including its ad-supported service, rose to 191 million in Q3 from 180 million at the end of Q2.

Apple remains in hot pursuit with its Apple Music subscription service. Estimates were that the company had 44 million paid subscribers as of June. Apple CEO Tim Cook has said the service has “well over 50 million listeners,” including those still in a trial period. Apple reports its latest quarterly earnings after markets close today.

The 4 million new paid subscriber number was about half what Spotify added in the June period  but about the same as it reported in Q1.

Revenue for the quarter rose 31 percent from the same period one year ago. And the overall results were in line with investor expectations. 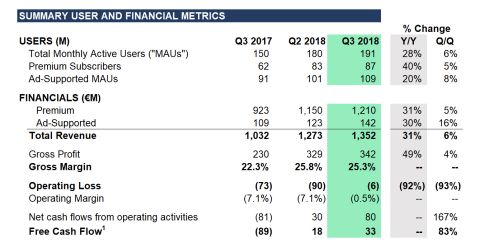 But Spotify did slightly lower its overall outlook for 2018. The company now says it expects total MAUs of between 199 million and 206 million, a range that it had previously put as high as 207 million. The projected range for paid users is now 93 million to 96 million, clipped a bit from a possible high of 97 million. The company maintained its projected revenue range.