On November 6, millions of Americans will cast ballots for municipal, state, and national candidates at physical polling places across the country. But voting site closures — the result of budget cuts, the shrinking of available venues, and a struggle to recruit poll workers — mean that some will have to travel further than others.

Nearly 3,000 polling locations were consolidated or shut down between 2012 and 2016, according to the Election Assistance Commission, following the shuttering of 12,000 from 2008 to 2012. States such as Wyoming and Indiana reported reductions of over 20 percent, joining 16 others that saw an overall net decline in voting sites.

Complimentary transit promises to help close the gap in some cities, and in others ride-sharing companies like Uber, Lyft, Line, Via, and Lime plan to extend promotional rates to voters en route to ballot boxes.

That’s good news, because closed polling places aren’t just inconvenient. They have a measurable impact on voter turnout, studies show — the Center for Information and Research on Civic Learning and Engagement estimates that 15 million people didn’t vote in the 2016 election because they couldn’t reach a physical polling place, and a Pew Research Center analysis of Census Bureau data found that a lack of transportation was one of the top 10 reasons registered voters don’t follow through.

“Any time you create additional hoops that voters have to jump through, it hurts — particularly when it affects the poorest, most at-risk, and vulnerable citizens,” John Powers, counsel for the Voting Rights Project of the Lawyers’ Committee for Civil Rights Under Law in Washington, said in a statement this week. 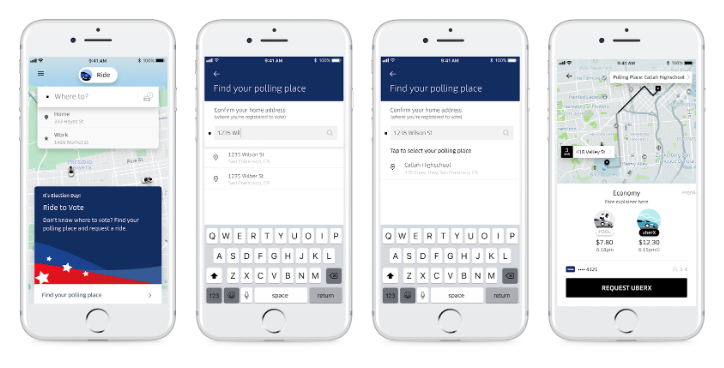 Uber will offer $10 off rides to polling places on November 6, the company said late last month. The one-day discount will apply to single trips on the “most affordable” Uber option — Express Pool, Uber Pool, or Uber X — nationwide, excepting Utah and Michigan (because of restrictions on discounted transportation on Election Day) and residents of U.S. territories and Puerto Rico.

A dedicated Poll Button in the Uber app will pinpoint nearby voting sites and prompt users to book a ride with a special promo code, which will be made available on Election Day.

It’s an expansion of the Bay Area firm’s 2016 get out the vote efforts, which saw it partner with Google to deliver Election Day reminders and polling site directions through the Uber app.

“With the 2018 elections around the corner, many organizations and companies across the country are going the extra mile to support our democratic process,” Uber CEO Dara Khosrowshahi wrote in a blog post. “At Uber, we want to do our part, too — by helping voters register and get to the polls on Election Day.”

Uber’s also working with #VoteTogether to offer free rides worth up to $7 in select communities, and with Democracy Works to spread awareness of its $10 discount campaign. (#VoteTogether has sent out more than 15,000 promo codes.) Moreover, it’s encouraging drivers to register to vote either at one of Uber’s 125 Greenlight Hubs or through with resources provided in the Uber app (courtesy of When We All Vote).

Additionally, the ride-sharing company said that campaigns and organizations can use its Uber Events service to purchase and distribute promo codes for rides to the polls. 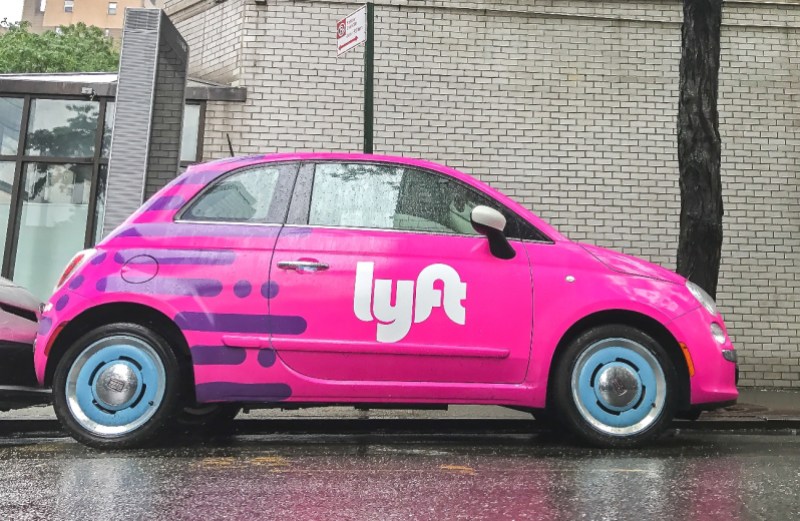 Lyft in August announced that — in partnership with Vote.org, Nonprofit Vote, TurboVote, and more — it’ll offer 50 percent off rides throughout the country on Election Day. This is slightly more generous than its 2016 promo, which slashed ride prices by 45 percent in 20 markets. This year’s codes are available from BuzzFeed, another of its partners.

And Lyft said that in “underserved” communities facing “significant obstacles” to transportation, it’ll offer free rides through nonprofit, nonpartisan organizations, including Voto Latino, local Urban League affiliates, the National Federation of the Blind, Faith in Action, League of Women Voters, and the Student Vets of America.

To drive voter awareness, Lyft’s teaming up with When We All Vote and National Voter Registration Day to remind folks about registration deadlines via push notifications; give drivers voter information at Lyft Hub locations; and offer online voter information through its partner organizations.

Select drivers who give Lyft rides on November 6 will receive a special gift.

“We know that lack of transportation has historically been a barrier to voting for many people, and our goal is to provide those living car-free with an easy and reliable way to get to the polls,” a spokesperson said. “Our hope is that they also grab a few friends who don’t have proper transportation and bring them along so their voices can be heard as well.” 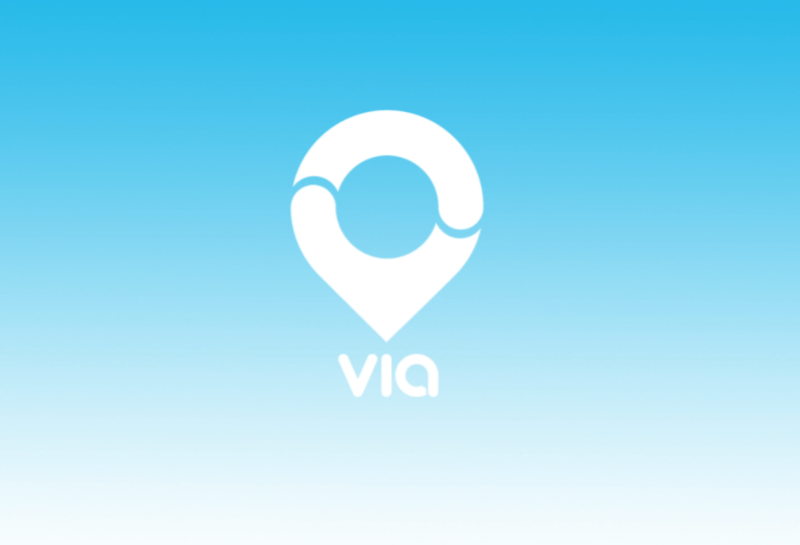 Via’s taking a slightly more local approach to Election Day campaigning. In West Sacramento, California — a suburban location with a lack of access to public transportation — and one of its partner cities, it’ll offer a discounted rate. Residents will be able to take Via to any polling location for $1 from 7 a.m. to 10 p.m. with the promo code WSVOTES. 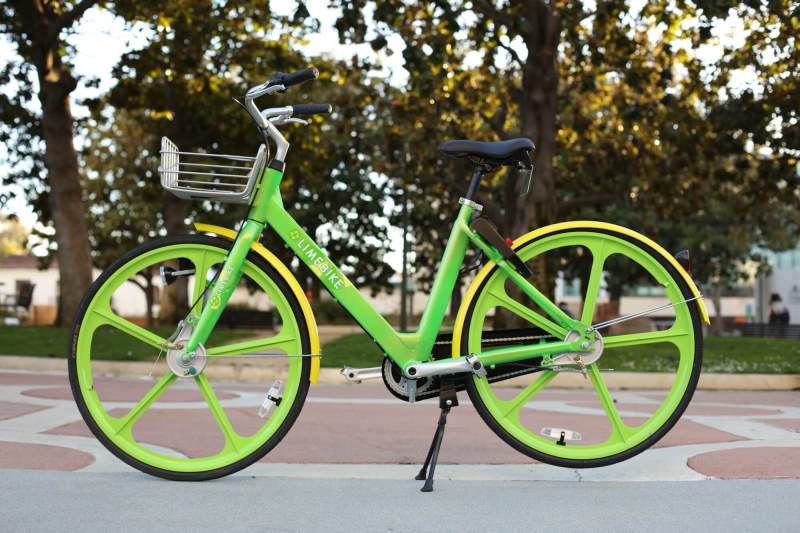 Electric scooter- and bike-sharing service Lime this week announced that it’ll offer free rides to polling places. Entering the code LIME2VOTE18 within the Lime app on November 6 will unlock any of its full fleet of bikes, e-bikes, and e-scooters for up to 30 minutes in more than 100 cities.

“Whether this is your first time reading about Lime or you’ve been a member of our community from the beginning, we are proud to continue serving our riders in innovative ways and providing them with new opportunities to be a part of a better future,” Lime cofounder Brad Bao said. “Transportation to the polls is often a challenge for many Americans on Election Day, so we’re doing our part to help.”

The startup’s teaming up with Vote.org and I Am a Voter for reminders and personalized information about registration deadlines, absentee ballot request deadlines, polling place locations for early voting and Election Day voting, and more. Lime said it’ll send all riders an email reminder with supplemental voting information on November 6. 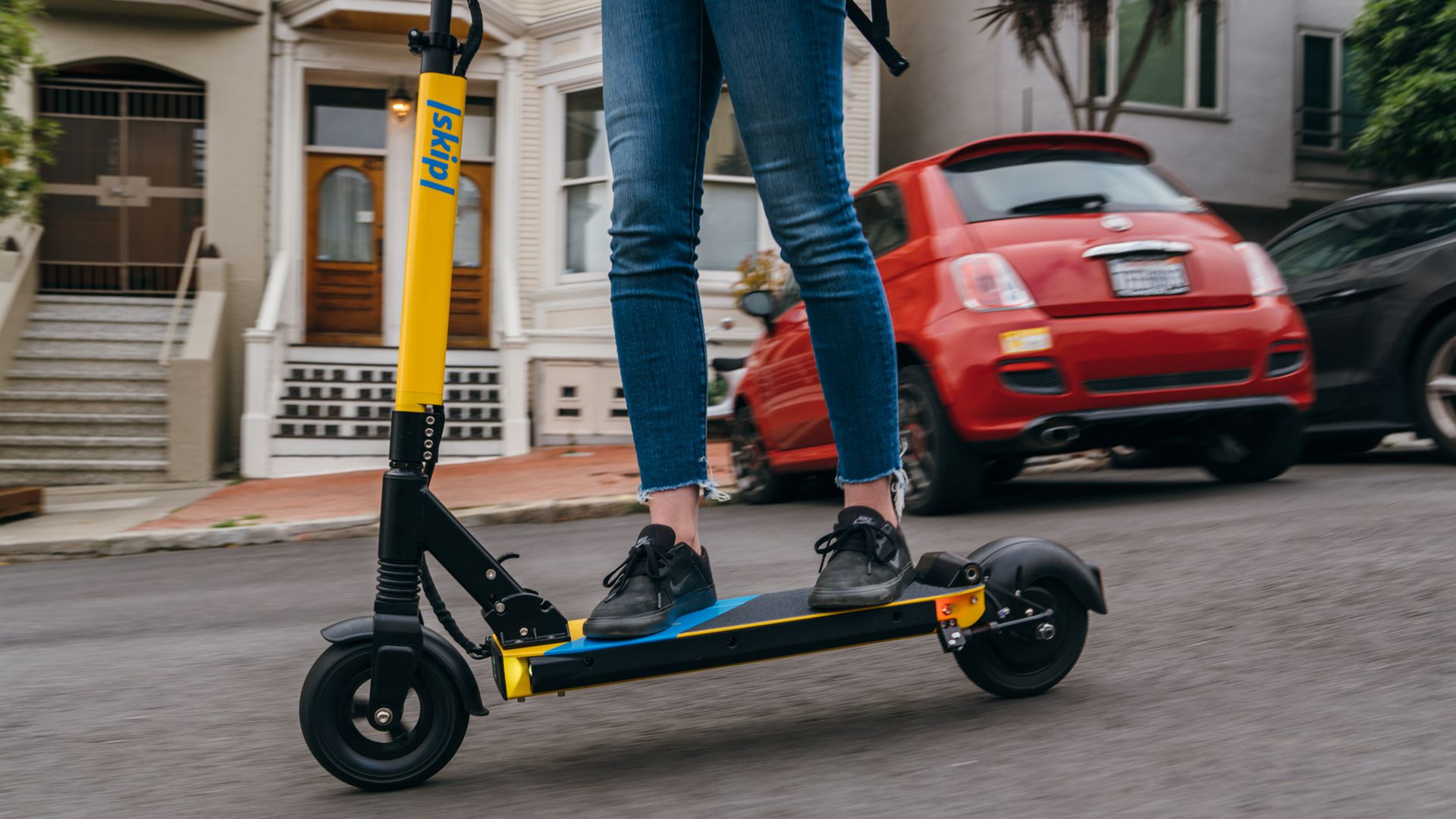 Dockless electric scooter startup Skip is doling out credits to users who follow its Instagram or Twitter accounts, cast a ballot, and post a selfie (tagged “@SkipScooters” and “#SkiptothePolls”) with an “I VOTED” sticker and Skip scooter in the frame. They’ll get a $5 ride credit — one per user, only valid for rides by December 6.

“We’re proud to support the communities we serve and know building the cities, infrastructure, and world that we want requires us each to do our part,” Skip wrote on Medium. “Hope you’ll take time to let your voice be heard!” 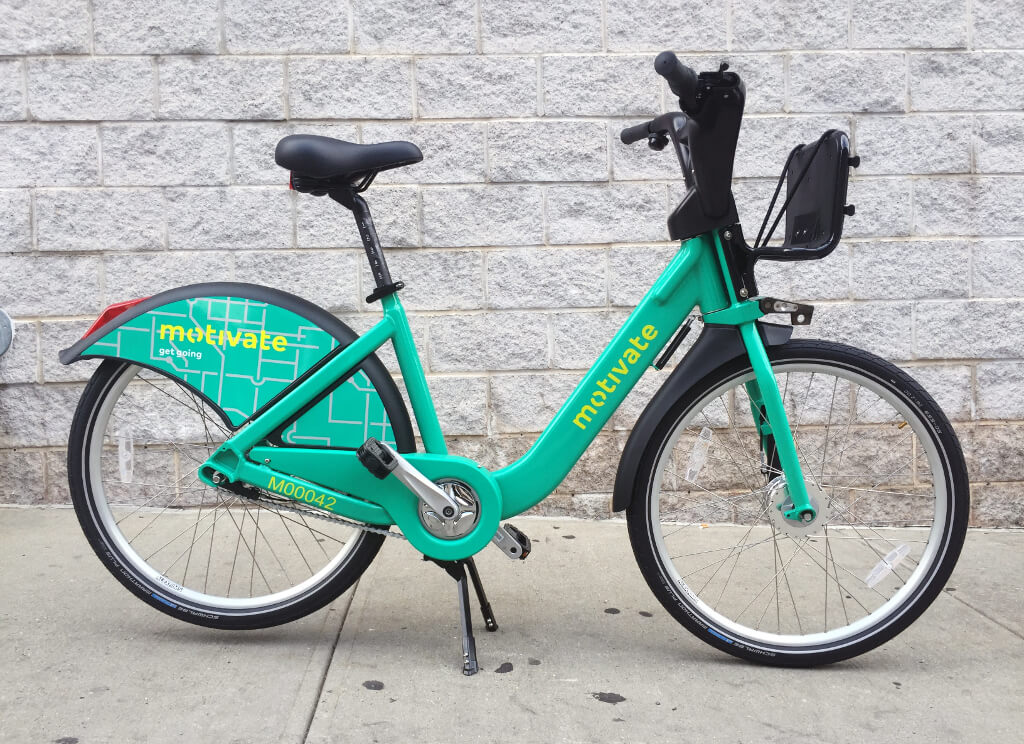 Divvy, the company’s Chicago-based sub brand, will offer users free $15 Explorer Passes with the code VOTE18, granting them an unlimited number of three-hour trips in a 24-hour window. In Portland, Motivate’s Biketown will extend voters 30 minutes of free ride time with the code BIKE2VOTE.

“We want to make it easier than ever to pedal to the polls this Election Day,” Motivate spokesperson Julie Wood said. “Too many Americans don’t vote because they lack reliable and affordable transportation options. As voters make their plans for November 6, we encourage the millions living in cities served by our bike share networks to take advantage of free rides and use bike share to get to and from the polls.” 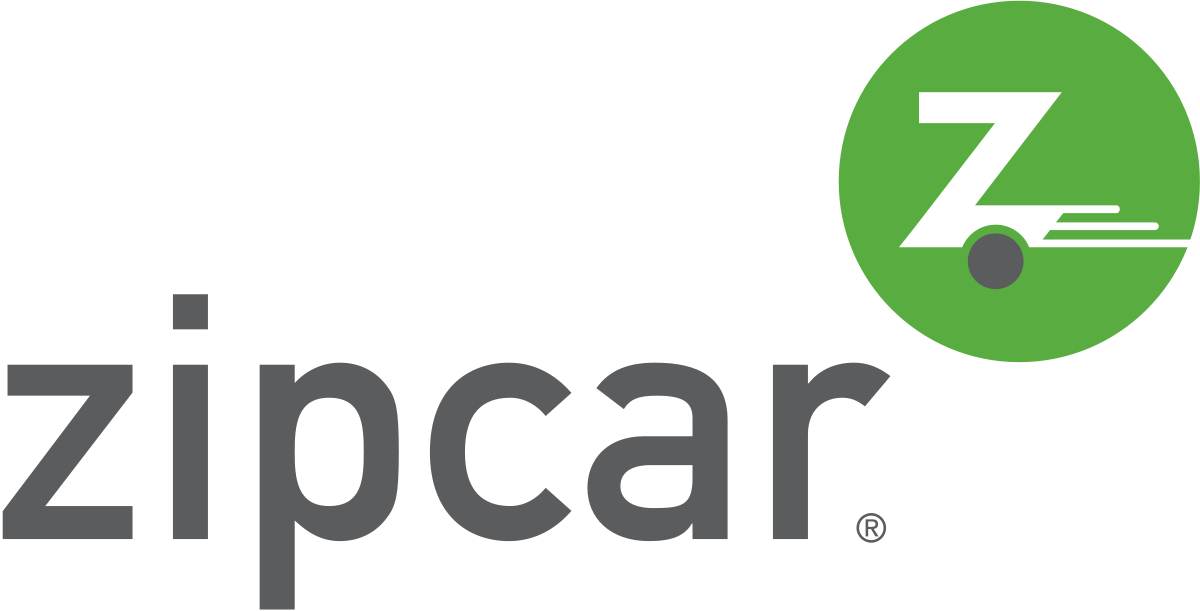 Zipcar offered discounts during the 2016 election, and this time around is no different. Customers who take a Zipcar on election night (November 6, between 6 p.m. and 10 p.m.) get $20 off a future trip.

“At Zipcar, our mission is to enable simple and responsible urban living — a mission that aligns with the responsibility we have as citizens to vote,” the company wrote in a blog post. “[We] encourage our community of civic-minded Zipsters to not only zip to the polls themselves, but to encourage others to vote as well. Together, we can make a real difference.”