Citrix Systems today announced it has acquired Sapho in what a Citrix spokesperson confirmed to VenturBeat was an all-cash $200 million deal. Sapho’s micro apps for team collaboration tools like Slack and Microsoft Teams call upon more than 50 popular SaaS products, including Salesforce, Workday, Concur, ServiceNow, Outlook, and Google Drive.

The company’s 90 employees at offices in San Bruno, California and the Czech Republic will join Citrix as part of the deal.

Micro apps can operate on smartphones, as well as personal computers, and will be integrated into Citrix Workspace to help surface actionable notifications for employees and improve efficiency, a company spokesperson told VentureBeat in a statement. 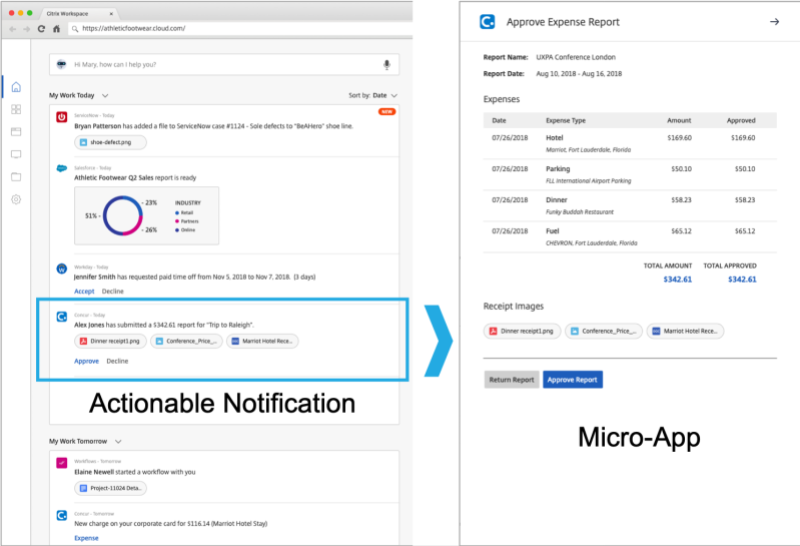 Above: Screenshot of Sapho in Citrix Workspace

Created in 2014, Sapho launched the Sapho micro app platform in 2016 to carry out quick actionable tasks and send notifications with buttons and visuals. A Concur micro app, for example, may ask a manager to approve or decline an expense report, while Oracle or Salesforce micro apps may give you the option to quickly send a campaign metrics report to your team.

Micro apps were also made to give antiquated enterprise software a modern interface and reduce the need to jump between several apps to accomplish goals.

In April 2017, Sapho introduced a bot for Microsoft Teams with the power to integrate multiple SaaS products into a single bot.

The Employee Experience Portal — with features like the Sapho Assistant — was introduced earlier this year for cloud and on-premise software systems and to reduce the number of systems an employee has to use to get their job done.