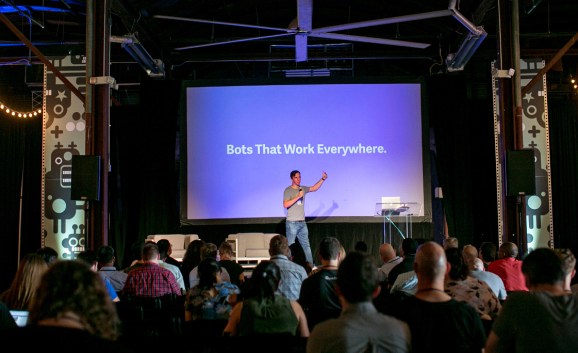 Talkabot conference held by Howdy and supporters like Slack, Microsoft Research, and Kik.

XOXCO is also creator of the popular Slack bot Howdy.

And the company is Microsoft’s most recent AI startup acquisition. In September, Microsoft acquired Lobe to help people make deep learning models without learning code, as well as AI development kit Bonsai in June and conversational AI company Semantic Machines in May.

Botkit got its start making bots for Slack and Facebook Messenger and was one of the first recipients of investments made by the Slack Fund. It has now been used to create more than 100,000 bots, CEO Ben Brown told VentureBeat.

Azure Bot Services, part of the Microsoft Bot Framework, has now been used by more than 360,000 developers, Microsoft announced Tuesday, up from 130,000 in May 2017.

XOXCO was created in 2013. Financial terms of the deal were not disclosed.

As part of the acquisition, Brown will join Microsoft and work remotely from Austin, where Howdy is based. No arrangements have been made for incorporating the Howdy platform into Microsoft’s conversational AI offerings.

“In the very beginning, before we launched [Microsoft] Bot Framework, [former Slack director of developer relations] Amir Shevat … actually introduced us to Ben Brown, and so from the very beginning we made sure our stuff worked really well with Botkit,” Microsoft AI and Research VP Lili Cheng told VentureBeat in an interview. “So we’ve known the Slack folks and Ben, and it’s just been really great to work with him. So he’s joining the team, and it will be really great to bring all the tools together — obviously, the GitHub acquisition was also great.”

Microsoft Bot Framework and Botkit integrations were introduced in 2016.

A key addition Brown brings to Microsoft is his experience with the bot developer community, Cheng said.

“I think we’ve worked together a lot on sharing community and stuff like that, and they’ve been focused a little more on the Slack community and a little bit more on enterprise customers. And they could broaden our reach with developers, so it’s just a really good synergy,” Cheng said.

Brown and Cheng have both hosted bot developer community gatherings. In 2016, Brown hosted Talkabot, a two-day gathering in Austin for bot developers. Brown and Cheng were also members of Botness, a small community of influential stakeholders in the conversational AI space that at one time included Google group product manager Gary Abrams, Automat CEO Andy Mauro, Chris Messina, and Hilary Mason, whose Fast Forward Labs was acquired by Cloudera in 2017.