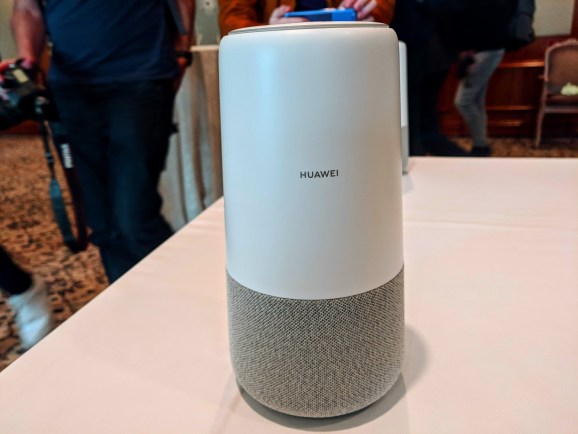 Is there room in the market for another voice assistant? Huawei seems to think so. Richard Yu, CEO of the company’s consumer business group, told CNBC in a recent interview that it plans to make globally available a voice platform for smart speakers and smartphones.

“We are using our own in China, in [the] future we will also have our own outside of China,” Yu told the publication. “In the beginning, we are mainly using Google Assistant and Amazon Alexa, [but] we need more time to build our AI [artificial intelligence] services … Later we will expand this outside of China.”

It’d be Huawei’s second voice assistant after Xiaoyi, a China-only offering available through Huawei’s combination smart speaker/wireless hotspot — AI Cube — that made its debut in September during IFA 2018 and the recently announced Huawei AI speaker.

Yu declined to say which language the forthcoming assistant will use or when it might be available, but assuming it eventually does arrive, it might tap Huawei’s proprietary equalizer tech for enhanced sound. Both the AI Cube and Huawei AI speaker (in addition to Huawei’s smartphones) ship with Histen (pronounced “High-sen”), a suite of features that include virtual bass, linear phase equalization, and adaptive gain control.

Regardless, Huawei’s voice platform faces an uphill battle against incumbents like Amazon’s Alexa and the Google Assistant. According to a new report from Canalys, Amazon has 31.9 percent of the world’s smart speaker market share, followed by Google with 29.8 percent, Alibaba with 11.1 percent, and Xiaomi with 9.7 percent. Meanwhile, Baidu announced last month that DuerOS, its natural language processing platform, is now installed on over 150 million devices and has more than 35 million monthly active users.

Recruiting manufacturers and developers to support the as-yet-unnamed assistant promises to be just as (if not significantly more) challenging. Amazon’s Alexa and Alexa Voice Service have more than 50,000 third-party apps and 3,500 brands signed on — not to mention compatibility with 20,000 smart home devices. The Google Assistant works with over 10,000 devices across 1,000 brands. And DuerOS runs on more than 110 devices from 200 companies and counts more than 16,000 active contributors among its developer community.

With voice assistant usage predicted to grow 1,000 percent to 275 million by 2023, though, Huawei’s clearly hoping to get in on what remains of the ground floor. If it’s successful, the play could well pay dividends — the global smart speaker market might be worth as much as $30 billion by 2024, according to Global Market Insights.