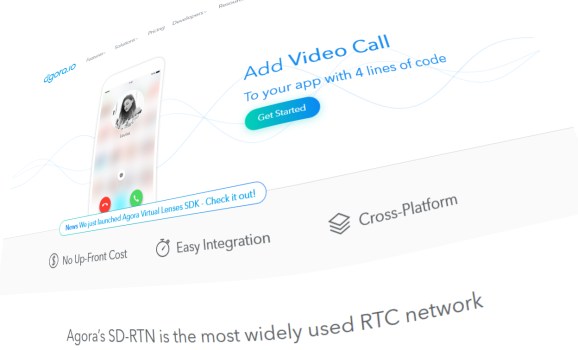 Agora, a platform that makes it easier for developers to add voice and video features to their applications, has raised $70 million in a series C round of funding led by hedge fund Coatue Management, with participation from SIG, Morningside, and Shunwei Capital.

The news comes just five months after Agora announced that it had added an extra $30 million in funding to its series B round, closing it off at $50 million in total.

Agora offers up a software development kit (SDK) that makes it easy for any developer to integrate voice and video calls into their own services, effectively saving them from the resource-intense process of building the necessary back-end infrastructure themselves. Last year, the company announced it was taking on Discord with a new platform for mobile game developers to add real-time voice chat to their creations, while the startup also offers a broadcasting SDK so companies can add livestreaming features into their apps.

“The internet has steadily transformed the way people communicate over the last decade, but these interactions will continue to shift as technology advances at a rapid pace,” said Tony Zhao, CEO at Agora. “We are creating a new category of real-time communications that puts engagement at the core of the user experience, and we will continue leveraging our unique technology and global reach to further transform the space.”

Agora was founded in 2014 by Zhao, who was on the founding team at video conferencing company WebEx, which sold to Cisco for $3 billion back in 2007.

Agora has now raised $125 million in total, and with its latest cash injection it said that it plans to double down on its efforts to grow its operations globally. Indeed, the startup recently revealed that it plans to employ “localized strategies” to acquire new customers in India, Japan, and Europe.

Even the biggest technology companies rely on the SDKs of platform such as Agora; the bottom line is that it is just too expensive for companies to build their own reliable in-app messaging or livestreaming features. And why bother trying if someone else is dedicated to being the best in that particular field?

A number of companies operate in a similar space to Agora, including the likes of publicly traded Twilio, which recently hit an all-time high of more than $90 per share — well up on its $15 IPO price of two years ago. Other companies that exist to sell access to communication SDKs include MessageBird and SendBird, though they are slightly different propositions to Agora. However, the underlying premise is the same: to save companies from building their own communications backend infrastructure.

Headquartered in Santa Clara, with additional offices in Shanghai, Agora customers include Xiaomi and Indian WhatsApp rival Hike Messenger. The company said that it has experienced an “explosive” year of growth, having now passed 2 billion SDK installations.