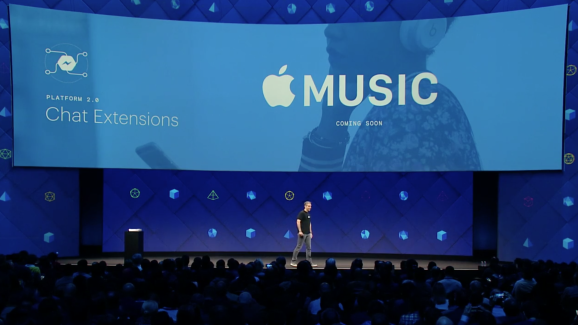 Apple has been working to expand the availability of its Apple Music service.

Instead of keeping streaming music service Apple Music exclusive to its own devices and apps, Apple has let Google Android and Facebook Messenger users sign on in previous years. Now the service is coming to Amazon’s Echo devices, Amazon announced today, with full Alexa integration.

Apple Music for Echo will provide access to over 50 million songs, enabling Alexa to stream everything from individual tracks and playlists to radio stations, even including Beats 1. Users will just have to enable the Apple Music skill in the Alexa app and link their accounts to make the new feature work.

With over 50 million subscribers, Apple Music is believed to have surpassed Spotify in U.S. installed base during the summer, but both services continue to grow in popularity. Regardless whether it’s currently number one or two in the country, however, Apple Music support is a win-win for large numbers of Apple and Amazon users.

Amazon’s frosty relationship with Apple has thawed somewhat in recent months, as the sometime rivals reached an agreement to bring new Apple devices back to Amazon’s retail storefront, pushing small, unauthorized vendors out of the store. While Amazon opted not to sell Apple products that compete directly with its own audio and video offerings, it is offering iPads, iPhones, and Macs, as well as accessories.

The exact date for the Echo Apple Music rollout isn’t clear, but Amazon says Apple Music will start to become available on Echo devices during “the week of December 17.” That’s just in time for the end of the 2018 holiday season and a good opportunity for Apple to keep some new iPhone and iPad users from switching to Amazon’s Music Unlimited service, which has become competitive on both price and music catalog size as it chases Apple Music subscribers.