MediaTek may not have the name recognition of larger chipmakers, such as Qualcomm, Intel, Samsung, and Huawei, but its chips are found in nearly a third of mobile phones — largely low- to mid-range Android devices sold in Asia. Today, the company announced an AI-powered 4G smartphone system-on-chip (SoC) called Helio P90 and said it will reveal its 5G SoC at Mobile World Congress 2019 in February.

Offering an alternative to Qualcomm’s just-announced Snapdragon 855, Helio P90 similarly focuses on AI improvements that will augment everything from photo and video capture to object recognition and general computation. Using a fusion AI architecture, MediaTek’s second-generation APU adds a custom-built Inference Engine to assist the Tensilica DSP found in the earlier Helio P70. Collectively, the P90’s AI processors promise 1127 GMACs (giga multiply-accumulates per second) of computing power, up from 240 GMACs in the P70, or 4.6 times greater AI performance than the P70.

While the GMAC numbers are abstract, MediaTek says that the speedy AI will enable secure facial unlocking, full-body AR avatars, and 4 times faster noise reduction for low-light photographs. P90 will also enable real-time face beautification during video recordings, intelligent environmental awareness for improved photo exposures, and the ability to process either a single 48-megapixel image or dual-camera 24+16-megapixel images without missing a beat. On the computational front, P90 will be able to run “the most complex AI apps and tasks while running multiple AI functions at the same time,” notably including support for Google Lens. 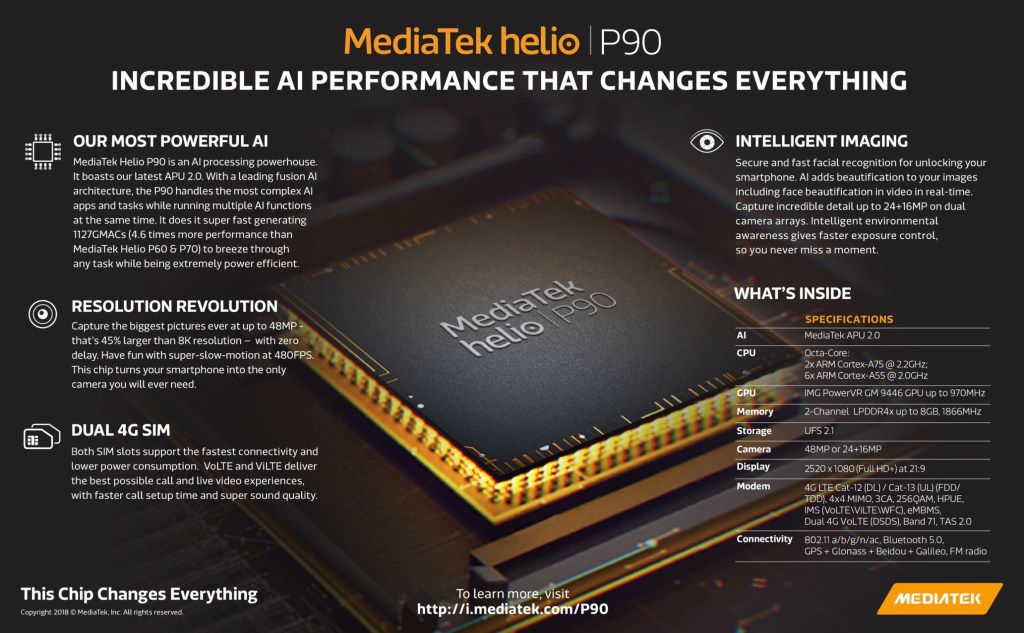 If there’s a hitch to Helio P90, it’s the modem, which is arriving with last-generation 4G capabilities at the beginning of the 5G era. Supporting Category 12/13 LTE, it promises download speeds in the 600Mbps range, with uploads at up to 150Mbps, significantly slower than the 2Gbps Snapdragon X24 LTE modems found in Qualcomm’s latest SoCs.

Without announcing any specifics, MediaTek also said today that it will launch its first 5G-ready SoC in February, at the Mobile World Congress 2019. The company has previously revealed Helio M70, the likely modem component for the chipset, which is compliant with the international 5G NR standard and will support the sub-6GHz frequency band. As U.S. 5G deployments are thus far using a second radio frequency band known as millimeter wave, with plans to add sub-6GHz frequency support later in 2019, it’s unclear whether a chipset with Helio M70 will find any U.S. customers.

The radio frequency support distinctions are particularly important because of one potential MediaTek customer: Apple. Following a 4G-related legal battle with Qualcomm and reported 5G engineering troubles at Intel, Apple is said to be considering MediaTek as a potential 5G modem supplier if Intel’s second-generation 5G chip misses its current engineering timeline. But Apple would only choose a modem with broad international frequency support.

Helio P90 is currently sampling to customers, and initial devices with the chipset are expected to be announced near the end of 2019’s first quarter, after Mobile World Congress. Assuming that MediaTek’s 5G chipset hits its current schedule, 5G-ready devices could follow before the end of the year.