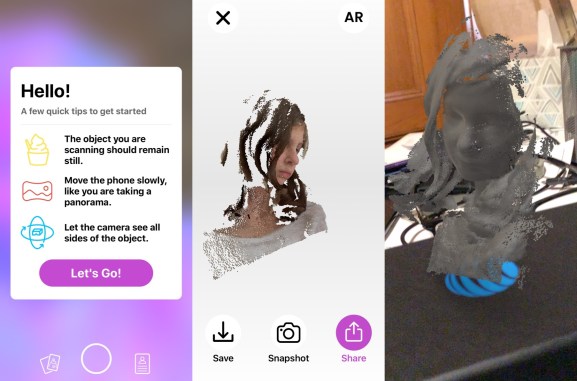 Capture works on the iPhone X, XR, XS, and XS Max, as well as the latest iPad Pro models with TrueDepth cameras.

As of late 2018, Apple has brought depth-sensing front cameras to six of its flagship iPad and iPhone devices, but the hardware has largely been limited to two purposes: Face ID unlocking and creating cartoony Animojis. Now there’s a compelling new use for the camera, as developer Standard Cyborg has released Capture, a free app that lets users create detailed 3D scans of people and objects for use in augmented reality or other purposes.

Using Capture is straightforward: The screen reflects what the front camera is seeing, offering a preview of the object you want to scan. After pressing a shutter-like button at the bottom of the screen, you’re supposed to turn the object very slowly so all of its sides can be scanned. The scan will stop automatically when it’s done, or give you an abrupt warning that you’re moving too fast and need to begin again.

Apart from the fact that scanning is fairly slow and takes place on the same side of the device as the screen, there are a couple of other limitations. The sensed object appears in almost comically basic rainbow shades within the preview window, and fine details such as hair may not be captured ideally by the scan.

Once you’ve finished a scan, Capture is able to export the object’s 3D data in USDZ, STL, or OBJ formats. Additionally, you can activate an AR mode where you can preview how the scanned object will look in a real-world environment, including intuitive ARKit-based room measurement and pinch-to-resize motions.

In its current form, the app’s functionality is basic, but the developer includes a “heads up” notice that color 3D export and color AR previewing features are coming soon. For now, you can see a flat preview of the scanned data in color, and see the object in monochrome within your preferred AR environment.

There are plenty of potential uses for 3D scans: creation of in-game objects, realistic statues or avatars of people, and elements for AR shopping apps. The key to Capture is its zero dollar cost of entry, availability for multiple popular devices, and support for standard 3D object formats.