AT&T may be meeting its self-imposed deadline to launch “5G” service in 12 cities this week, but based on what the company has said — and not said — I can only conclude that its 5G network isn’t actually ready for prime time. Yet.

The problem is straightforward: As of today, 5G’s only benefit over 4G is speed, and AT&T has gone silent on the speed of its 5G network. Verizon promised 300Mbps to 1Gbps speeds before launching its 5G home broadband network in October, then exceeded its minimum guarantees. By contrast, AT&T made no commitment to network speeds (or latency) in its 5G launch press release, nor does it offer performance estimates in its consumer 5G web pages.

Seeking to quantify the network’s performance, I reached out to the normally responsive AT&T to ask about a report that its 5G+ network would have real-world speeds of 140Mbps, despite theoretical peak speeds that have alternately been pegged at 979Mbps or 1.2Gbps, depending on the source. There was no response. 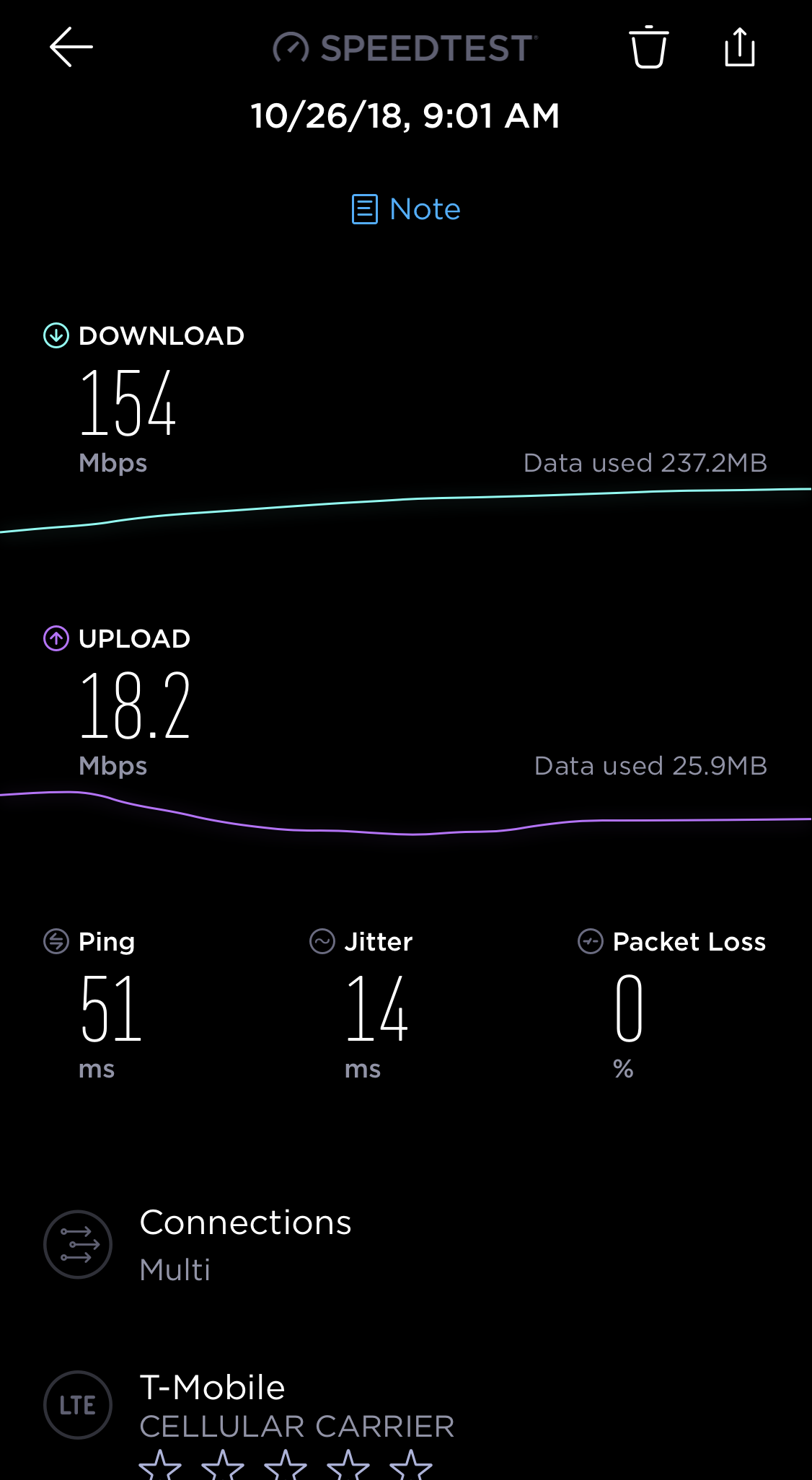 If AT&T’s real-world 5G speeds are indeed only 140Mbps, it’s about to have a very rocky launch. To put that number in context, I was personally able to hit 150Mbps during testing of both the iPhone XR and iPhone XS this fall — on T-Mobile’s existing 4G network, without leaving my neighborhood for one of AT&T’s 12 selected 5G cities. And the latest Qualcomm-powered Android phones are capable of achieving even faster peak speeds with the right cell towers.

You can be certain that AT&T would be crowing right now if had brag-worthy speeds. After all, it has 12 cities’ worth of customers to pitch on 5G service, which it says will start at a hefty $70 per month for only 15GB of data. But it’s instead planning to spend “at least 90 days” giving away Nighthawk hotspots and 5G service for free to certain early adopters. Then it will actually start selling the device and service next spring.

From my perspective, this all adds up to an unfortunate conclusion. Despite AT&T’s claim that tomorrow it will be “the first and only company in the U.S. to offer a mobile 5G device over a commercial, standards-based mobile 5G network,” the launch doesn’t sound “commercial” to me. Giving away “5G+” hardware and service without any speed promises sounds like a punt: a 90-day test with results (hopefully including data caps and pricing) to be re-evaluated next year.

Given how physically large the Nighthawk 5G Hotspot is, the only reason I’d even consider participating in AT&T’s test would be that it’s free. Even then, I might be just as well off with the performance of the T-Mobile phone I can fit in my pocket. So now it’s up to AT&T to demonstrate that there’s more to be gained from its 5G network than “first” bragging rights — both for consumers, and for itself.

Update on December 21 at 11:44 a.m. Pacific: AT&T has provided a small interim update, as it says that it’s just beginning to gather actual speeds since it’s still testing both its network and hotspot.

For Nighthawk: “While actual speeds will be lower, the hotspot is designed to eventually reach a peak theoretical speed up to 979Mbps in ideal lab conditions. This device can also access our 5G EVO and 4G LTE networks, which is a great advantage and very useful for our selected customers when not in 5G+ coverage.”

For the 5G+ Network: “A number of factors will contribute to the overall experience – device, number of customers on the network simultaneously, etc. In 2019 we expect 5G to ultimately enable multi-gigabit speeds as the ecosystem evolves.”