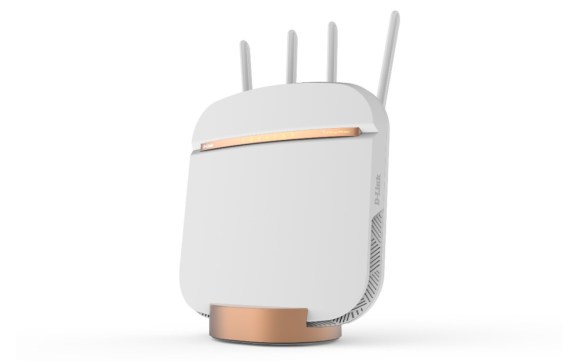 If you can imagine getting home cable broadband service without either cables or the standard cable modem, that’s the promise of D-Link’s new “5G Enhanced Gateway,” DWR-2010. With nothing more than wall power and a SIM card, the router promises to create a high-speed Wi-Fi network in your home — albeit with a couple of non-trivial caveats.

Built with Qualcomm’s SDX55 chipset, the 5G Enhanced Gateway is capable of transmitting standards-compliant 5G data through either millimeter wave or sub-6GHz towers, the former currently available in a handful of U.S. cities and the latter planned for wider deployment in 2019 and 2020. Four of its antennas pick up 5G signals, falling back to LTE when 5G’s not available, and the unit also supports voice over LTE (VoLTE) for traditional phone calling.

Like a traditional Wi-Fi router, the 5G Enhanced Gateway enables users to access data either through Wi-Fi connections or Ethernet ports, starting here with a 2.5Gbps LAN, a 1Gbps WAN/LAN, and three 1Gbps LAN ports. The Wi-Fi 5 (802.11ac) support is practical — given today’s devices — but a generation old, offering an 800Mbps connection on one band plus 1.7 Gbps of bandwidth on another. It’s worth noting that faster Wi-Fi 6 routers are already being announced ahead of this month’s CES trade show, though no consumer devices — computers, tablets, or smartphones — include the chips necessary to use them.

D-Link’s key selling point for the DWR-2010 is convenience. Assuming there’s a 5G network in your neighborhood, and 5G data pricing is reasonable, a cellular carrier could offer you high-speed home broadband service with zero installation hassle — just plug the router into a wall near a window and, if the SIM card’s pre-installed, join the network. In theory, the router could work with current and future AT&T and Verizon 5G services, and D-Link expects it will expand broadband availability to “remote areas currently limited to dial-up and DSL services.”

A secondary selling point for the router is speed. The 5G Gateway’s bandwidth promises to stream 4K video content with ease and to support “little to zero lag” in online gaming. This sort of reduced latency is a key feature of 5G networks and is expected to enable both ultra-high resolution videos and instantly responsive immersive 3D/VR streaming.

The issues, of course, are actual 5G availability and broadband-compatible service pricing. While Verizon is offering unlimited 5G data in four cities for $70 or less per month, AT&T has suggested its $70 mobile 5G service will cap 5G data at 15GB monthly — so little that the average 5G broadband user will blow through it in a day or less.

The DWR-2010 is scheduled for release in the second half of 2019 and doesn’t yet have a price tag. By the time it’s released, multiple carriers will hopefully have affordable 5G data plans capable of making the most of its features.