Having attended Consumer Electronics Shows since well before the name was officially shortened to CES, I’ve come to expect major TV set announcements every year — and had almost zero interest in them until last week’s show.

For years, the theme at CES was “bigger,” a competition between brands to show off gargantuan screens that no regular person could afford, all in the service of being the first company to hit some arbitrary diagonal measurement. On occasion, the pitch shifted to “better,” with signs pointing you to the deeper blacks, richer colors, or extra fine details that you mightn’t have noticed on your own.

If I had to sum up this year’s theme, it would be “convenience.” For some companies, that meant displaying screens that could hide away or be linked together to fill any space; for others, CES was about showing off 4K screens that could fit in your pocket or on your face. More importantly, these technologies didn’t look like research projects or early prototypes; they appear ready to hit actual stores in the foreseeable future.

Here’s what caught my attention, and should be on your radar over the next year.

If the days of flat screens aren’t officially “over,” that’s only because the transition to curved displays won’t be either abrupt or complete, but rather gradual and partial. CES 2019 demonstrated conclusively that consumers should not expect screens to keep looking like 16:9 picture frames — instead, they’ll start to take different shapes, and possibly appear in unexpected places. 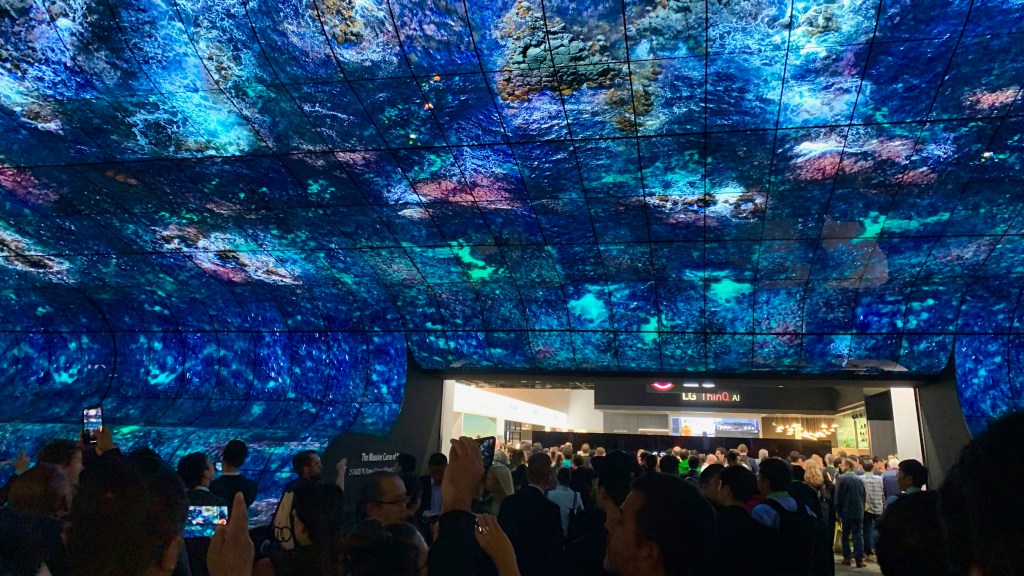 LG’s examples were the most provocative. At the entrance to its booth, throngs of people stood transfixed under “The Massive Curve of Nature,” a wave-shaped array of flexible OLED screens displaying videos of water, deserts, and light. Other TV makers showed more seamlessly stitched displays, but LG’s example was all about showing off the flexibility of its technology. 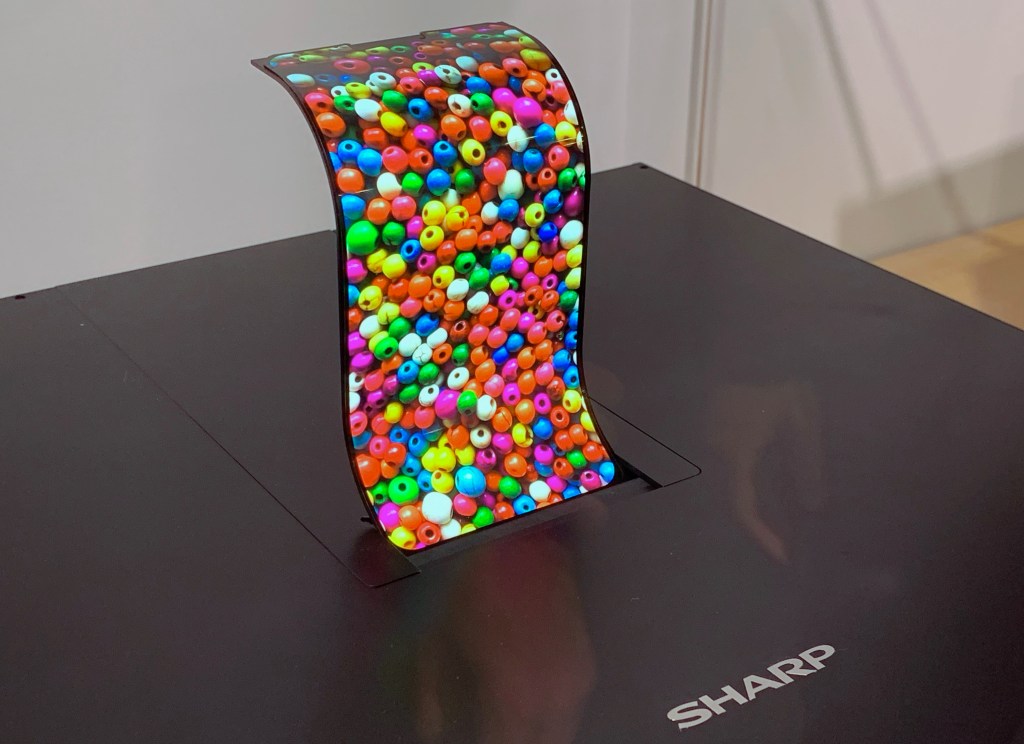 Several companies offered smaller-scale examples of flexible displays. Japan’s Sharp showed off a collection of traditional smartphones next to this flexible screen, noting that the same display could be used in either flat or dramatically curved configurations. While it’s hard to picture such a strongly curved handset fitting comfortably in a pocket, we’re getting closer to the point where phones (and watches) will casually use whatever organic, ergonomic shapes make sense to their designers — a decade-old vision that’s finally set to come true. 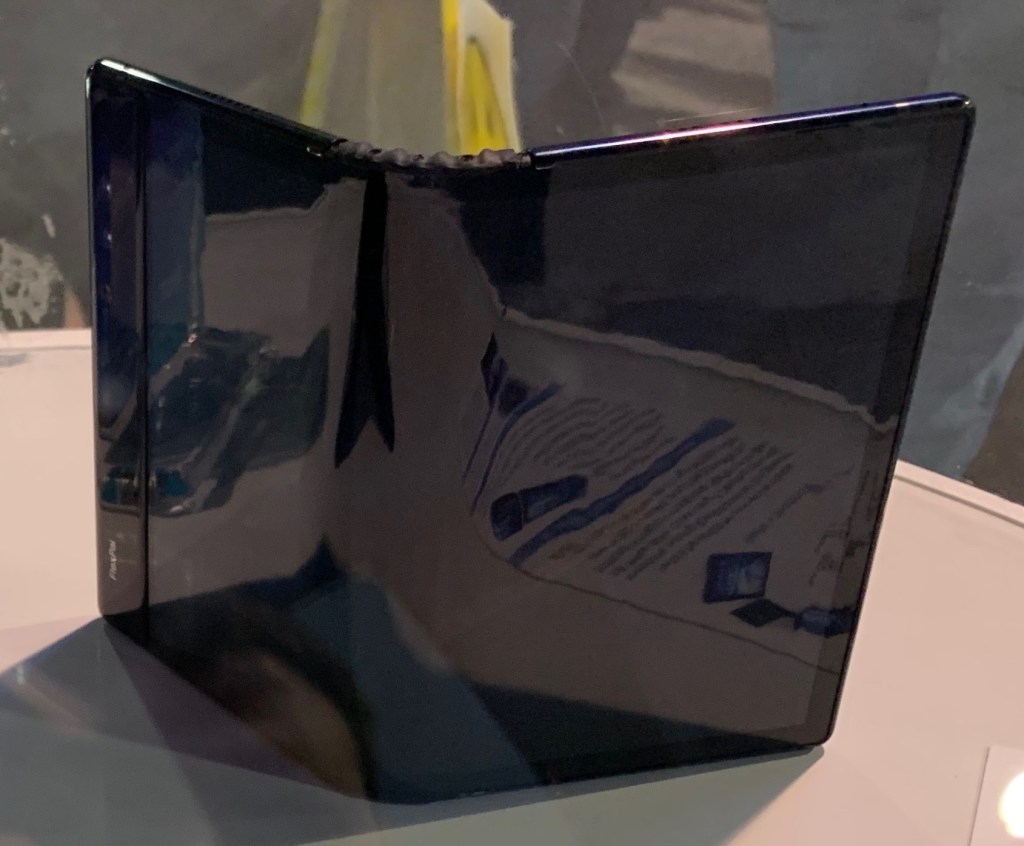 This year will certainly see flexible OLEDs make their way into convertible smartphone-tablets. Samsung and Huawei are both reportedly months away from officially introducing devices that unfold from “large smartphone” form factors to become small tablets. They technically were beaten to market by Royole’s FlexPai, a kludgy first-generation device, but it’s fair to assume that the better-known companies will soon offer more polished implementations of the idea. 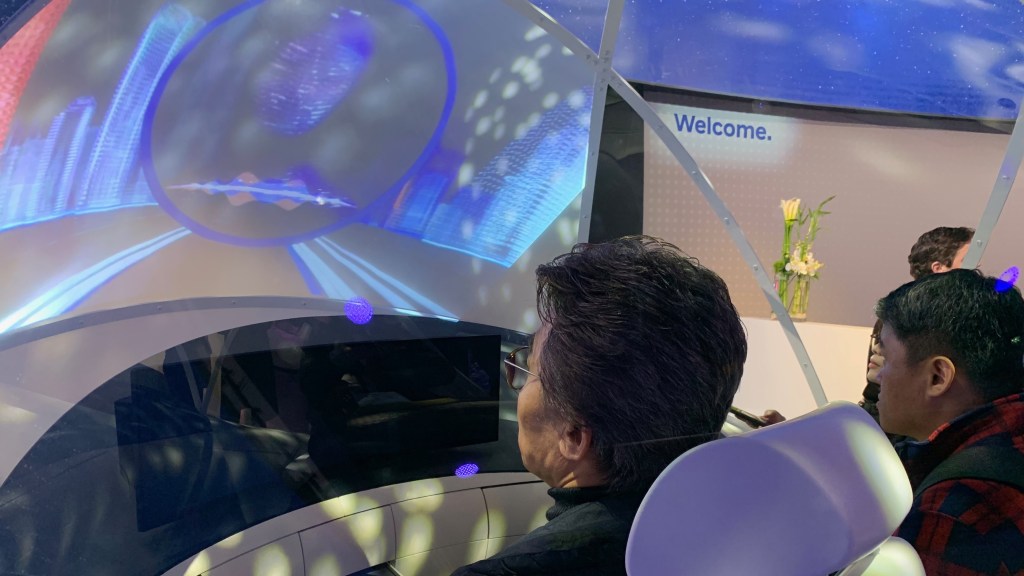 Other applications of flexible displays were also compelling. Automakers showed off curved car cockpits with screens that could be used for entertainment, navigation, and voice assistant interactions. 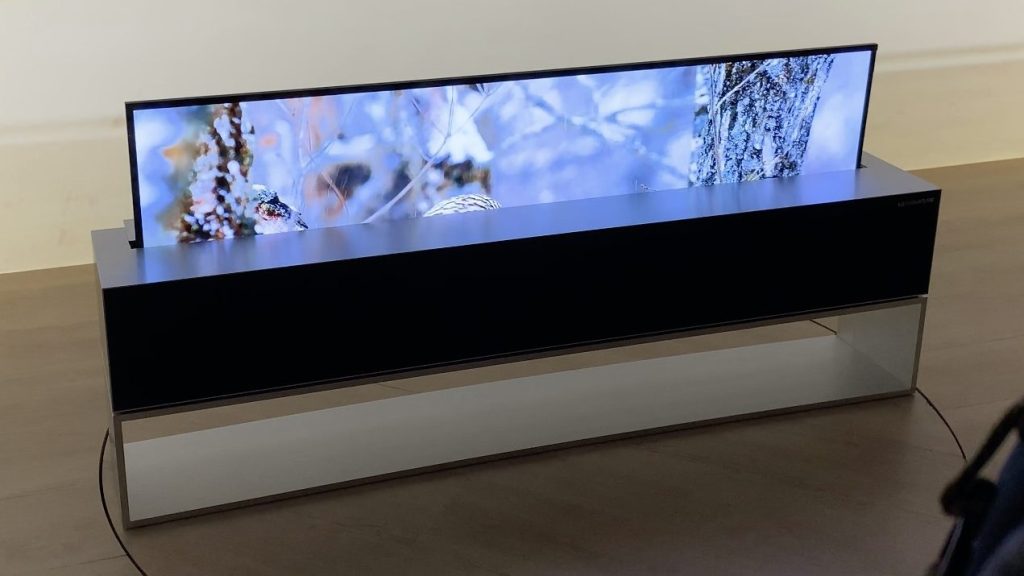 LG showed off a flexible display that automatically rolled up into a table, becoming invisible when not in use and seemingly completely rigid and flat when upright. The rolling mechanism was fully mechanized and seemingly silent, while using the OLED screen to provide a much better visual experience than the prior alternative, projector TVs.

The other compelling step forward at CES was tiny displays — high-definition screens so small that they’ll fit inside glasses. A company called Syndiant was showing off what it said were the world’s first 4K near-eye displays, bringing big screen TV technology into a form factor that people can wear. 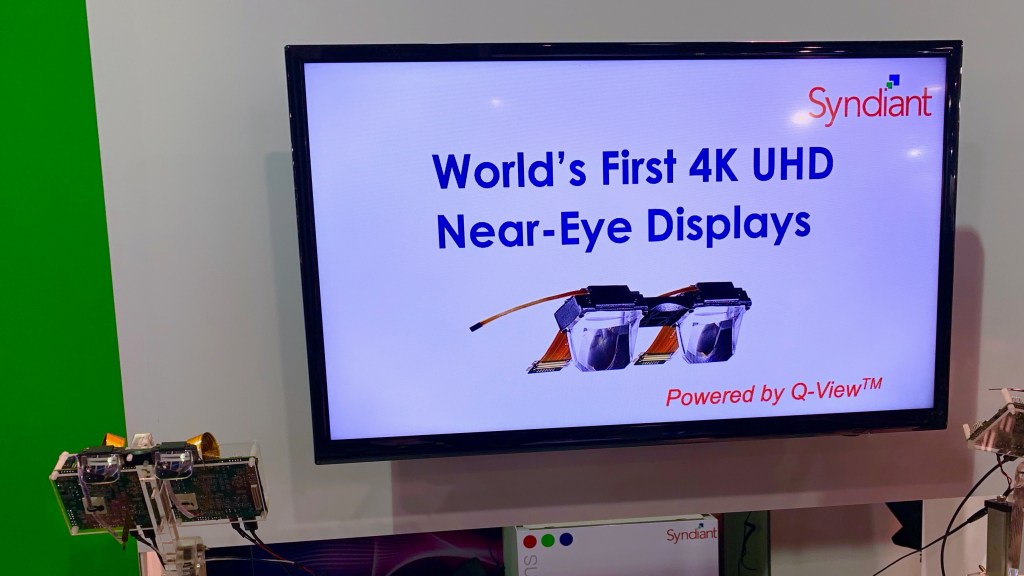 The following image doesn’t do justice in color or detail to what’s inside the tiny Syndiant glasses, but it was as much as I could quickly capture using a camera. I saw a wide, colorful, high-definition image that looked far more like a modern TV than anything I’ve seen in lower-resolution headsets. Syndiant apparently is working with LG on the technology, and was using LG’s 4K video footage to demo the displays.

It was established ahead of 2018’s Display Week event that new near-eye displays like this were coming soon, with the next goal to reach 8K resolutions that exceed the human retina’s ability to perceive individual pixels up close. Actually seeing a tiny 4K image look this good is enough to make one wonder whether the future of screens is in physically large displays, or in micro-sized ones that just look big to their viewers. 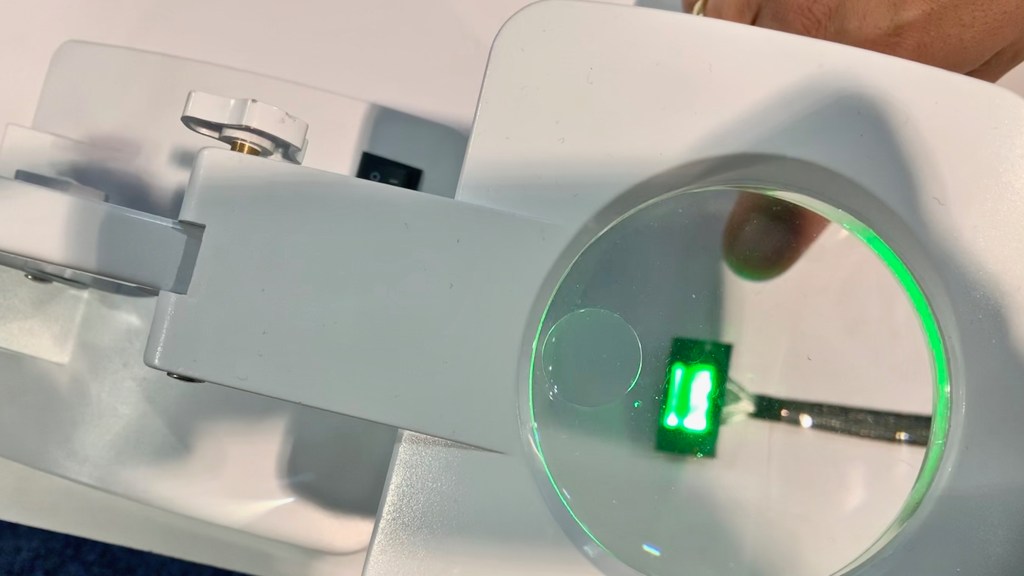 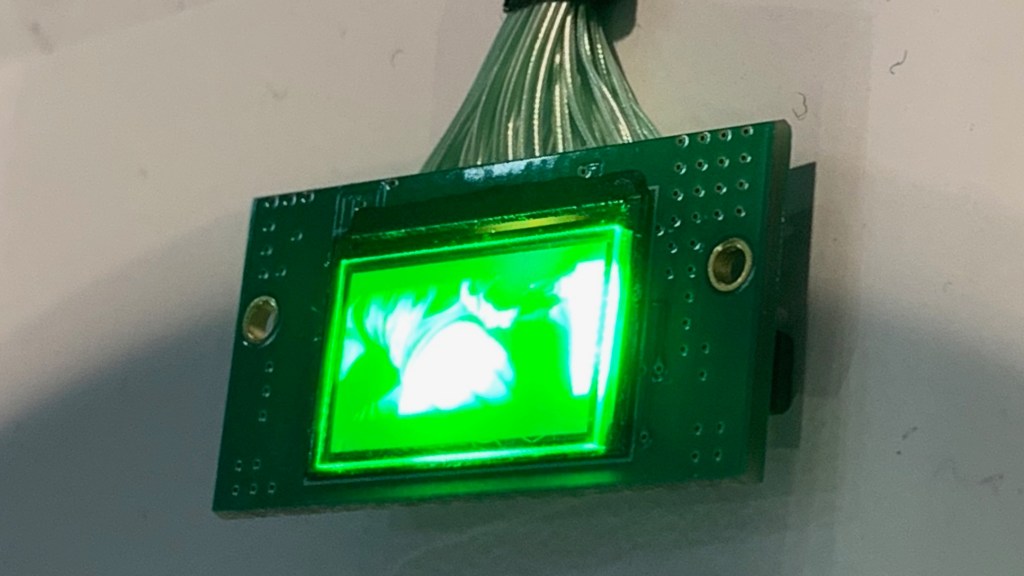 Many small companies with names you’ve never heard of before are working on similar technologies, as are larger players ranging from Apple to Google and Samsung. Patents suggest that the eventual goal is to move computing as we know it into a virtual, augmented, or mixed reality space, such that your “laptop” or “tablet” will become little more than a virtual object inside a lightweight pair of goggles. These high-def screens will be a major factor in making that happen.

It wouldn’t be CES without plenty of super-large displays that average consumers won’t be purchasing anytime soon, if ever, and this year’s show certainly didn’t disappoint in that regard. As was the case in past years, virtually every major TV maker showed up with big 8K TVs, apparently to demonstrate continued readiness for the day when consumer 8K video broadcasts commence, 8K optical discs become available, or 8K game consoles are released. (Most companies are still trying to wrap their heads around 4K, so don’t hold your breath.) 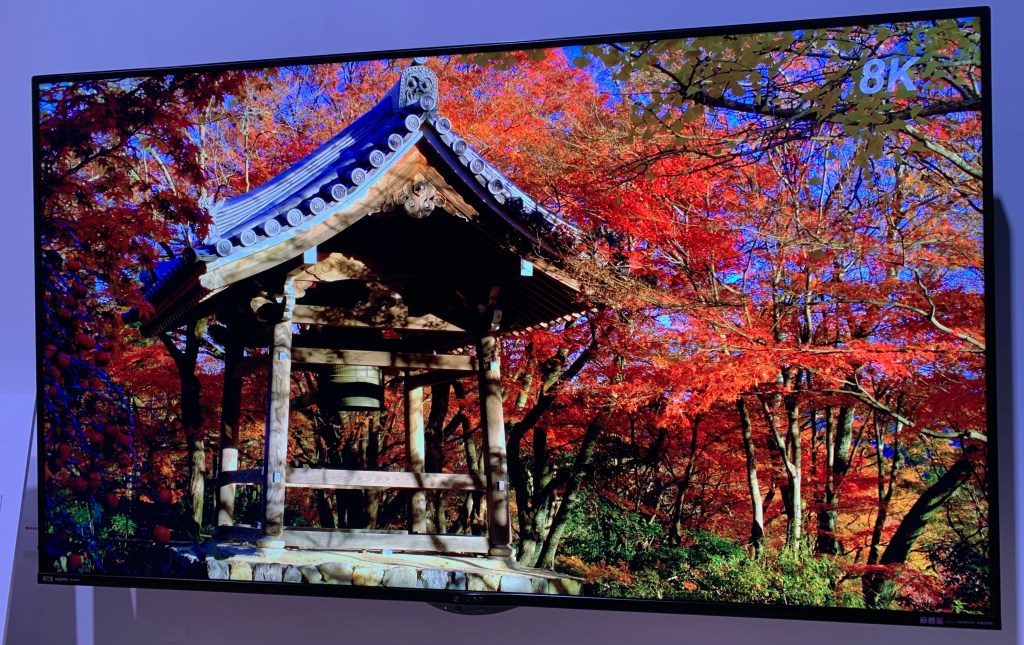 The key thing about 8K TVs is that viewers cannot see the improvements over 4K TVs unless the screens are very large — think 75 inches or more, bigger than most sets sold today — and people are standing or sitting close, which they tend not to do with big screens. But if both of those criteria are met, you can witness an incredible level of detail: the Sharp display above offers 33 million pixels with a 120Hz refresh rate. 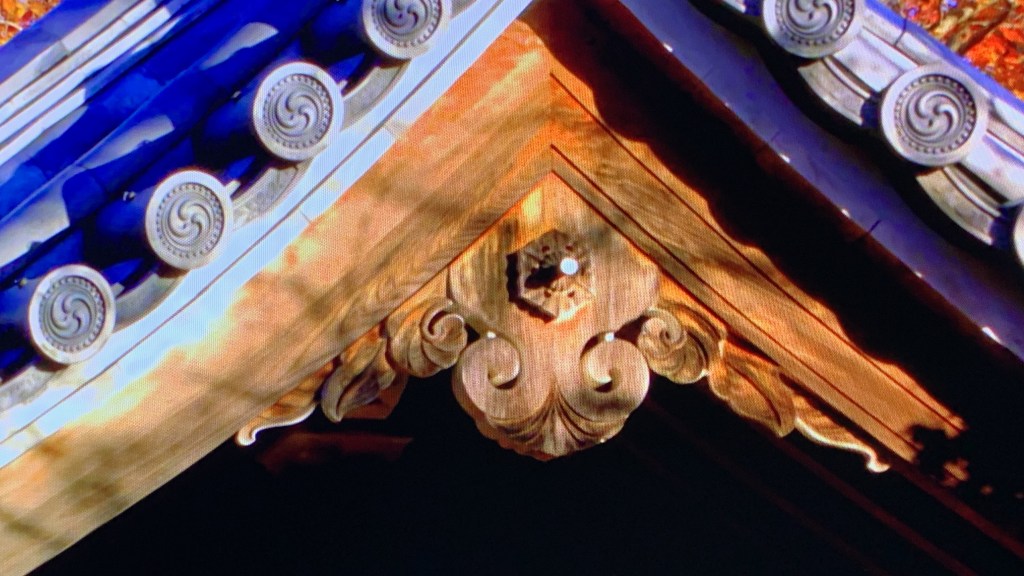 Rather than cropping the first 8K image above, I quickly moved closer to this 8K screen to grab a second shot from three inches away. Check out the tiny circles in those tiles — they look completely round rather than blocky, even at a short distance away from a large screen. In other words, the future of flat displays is photographic quality, such that a screen could be indistinguishable from a printed image … if not superior.

High-resolution displays of various sorts are going to rank fairly high on the “transformative technology” scale over the next five years, as screens are going to start appearing in shapes, sizes, and levels of quality that once seemed all but impossible. Questionable advances like 3DTVs have made CES screen announcements easy to tune out in recent years, but the latest technologies are set to make displays worth watching again.