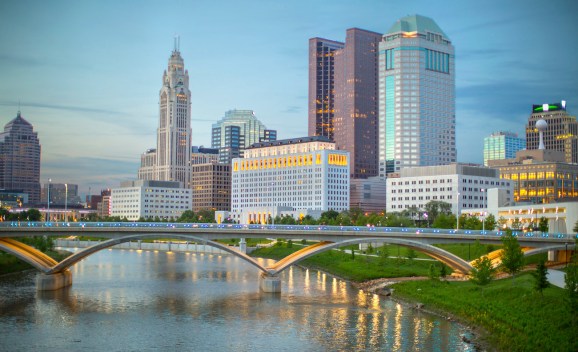 If you were to bet on one city that’s poised to experience serious startup growth in the Midwest, Columbus would be a good candidate.

One of those startups, Root, is now valued at more than $1 billion — a critical milestone for any developing startup ecosystem that wants to prove it can build industry-leading tech companies with the potential to employe thousands of people. The three companies each have between nearly 100 and over 250 employees.

The continued growth of Root, Beam Dental, and Olive has also been a win for the city’s largest VC fund, Drive Capital. Talk to any entrepreneur in town — whether they’ve been backed by Drive Capital or not — and they’ll point to the six-year-old VC firm as one of the biggest catalysts for Columbus startup activity in recent years.

“There wasn’t really a large venture fund here [before Drive],” Olive CEO and cofounder Sean Lane told VentureBeat. “Now we have more well-funded startups that have serious venture capital behind them.”

Founded by two former Sequoia partners, Drive Capital is built on the idea that the Midwest is the “investment opportunity of a lifetime” because more tech companies are being launched in the region than ever before and the amount of expertise in industries like insurance and health care is unrivaled. The firm has so far raised two funds, one at $250 million and another at $300 million. Aside from providing funding, Drive Capital has also convinced some of its portfolio companies — including Beam Dental and Ready Robotics — to relocate to Columbus.

“2018 was our best year yet — the majority of our portfolio companies continued their growth rates, but now they are growing off of much larger numbers,” Drive Capital’s Chris Olsen told VentureBeat.

It’s important to track what is happening in Columbus because it shows what can happen when a big new VC firm sets up shop in a Midwestern city that has traditionally been short on capital. But looking at the amount of VC money raised can be a precarious indicator of a startup ecosystem’s health — the influx of VC money is only helpful if a startup actually goes on to have a successful exit or IPO.

Columbus entrepreneurs say that beyond the influx of VC money, there are simply more high-potential startups being launched in the city than there were in years prior. Some data seems to bear that out.

In 2017, Columbus came in third on the Kauffman Foundation’s annual index of growth entrepreneurship — a measure of how hospitable a city is for high-growth startups — ahead of San Jose and San Francisco. Columbus was also one of the few U.S. cities to see its total number of startups raising their first round of venture capital financing grow over the past seven years. And Rev1 Ventures, a Columbus-based investor studio that provides seed funding for many of the city’s startups, has invested in nearly 100 companies since its inception nearly five years ago.

“It definitely feels like a lot has changed,” Beam Dental CEO and cofounder Alex Frommeyer told VentureBeat. “It’s one of those things where it’s like ‘Do you follow the data, or your emotions?’ And it’s probably a little bit of both. [I think] we’re seeing an increased rate of startups being founded in the city, getting funding in the city, growing their teams in the city, and building and shipping products [here].”

A college town with big opportunities

Entrepreneurs say that even compared to other Midwestern cities, Columbus has a number of advantages that have proven particularly helpful as its startups reach critical growth stages. Yes, like many other Midwestern cities, Columbus is home to a large research university, Ohio State University. But the university is also one of the five largest in the country by enrollment, giving local startups a larger talent pool to draw from.

The city’s also home to a fair number of retail headquarters, for companies like Abercrombie & Fitch, Lane Bryant, and Big Lots, as well as five Fortune 500 companies. That’s nearly half the number of Fortune 500 companies Chicago has — but the Chicago metro area’s home to 7 million more people than the Columbus area, so in that regard, Columbus punches above its weight.

That has proven important, especially as more big and medium-sized corporations have started investing in or becoming customers of startups, and as their employees want to go on and start their own ventures or work for startups. For example, Alex Timm, CEO of Root — which uses smartphone data to generate quotes for auto insurance — formerly worked at Nationwide Insurance.

“From a B2B perspective, you get access to a lot of key potential customers ….  look [within] a 500 mile radius, we can get access to 80 percent of the Fortune 500,” said Jeff Schumann, CEO and cofounder of Columbus cybersecurity startup Wiretap.

Because of the large concentration of corporations in the region, Columbus has historically been known for its B2B companies, as well as for health care. But that focus is also starting to change as the city’s startup community has matured.

Ryan Sevey is the cofounder of Nexosis, a machine learning startup for developers. He said that when he started Nexosis back in 2015, he was told that the business-to-developer type model he and his cofounder wanted to pursue couldn’t be done in Columbus — only in Silicon Valley. In fact, Nexosis was able to secure some capital early on by going through a Techstars program.

“For us to get the mentorship that we wanted … the best path we had was move to Minneapolis for three months and go through Techstars,” Sevey told VentureBeat. Nexosis did end up coming back to Columbus after the program was completed, raised a $5 million seed round, and was acquired by Boston’s DataRobot in 2018. Nearly all 20 of Nexosis’ employees are still working for DataRobot in Columbus.

Drive Capital’s arrival means that Columbus now has a proper Silicon Valley-sized VC firm — but only one. This means that when a Columbus company goes to Silicon Valley to pitch investors, their relationship with Drive Capital can be one of the first things they’re asked about. It’s a challenge that entrepreneurs in larger cities don’t normally face.

“Valley VCs would be instantly turned off, since Drive Capital wasn’t involved in Nexosis. Like we even had a couple say … ‘Well Drive’s in your backyard, they come from the Valley, if they aren’t already involved, why is that?'” Sevey told VentureBeat. “It’s not like a hard no — it’s not something that’s impossible to overcome, by any means. But certainly it’s a perception thing that you had to overcome.”

It also means there’s still not enough capital in town for seed-stage companies to raise their Series A or B from only local investors.

Wiretap’s getting ready to raise its Series B round, and Schumann says the company’s already starting to pitch coastal investors, after having raised an $11.1 million Series A from investors such as Pittsburgh’s Draper Triangle Network.

Schumann said that Draper Triangle Network, founded by Tim Draper, has been helpful in establishing connections to other investors. But he added that he still gets many questions from potential investors about what the business environment is like in Columbus and why the firm chose to locate there.

“I think we’re at the beginning of this curve that’s recognizing that things are happening here that are very meaningful, but they’re still questioning,” said Schumann.