The same, perhaps, can’t be said of eBay.

Back in 2014, eBay revealed plans to spin out its payments business, PayPal, into a standalone company. The move followed a long and contentious feud between eBay and activist investor Carl Icahn, who had argued that the two brands would be much better off going it alone, given the differing competitive opportunities and challenges they faced. Wall Street pretty much agreed, and when PayPal began trading independently in July 2015, it instantly became a more valuable company than its former parent.

Icahn, for his part, transformed all his eBay equity into PayPal shares — and that seems to have been a shrewd move. PayPal’s share value has pretty much been on an ascendancy over the past couple of years, reaching a peak of around $92 in August. 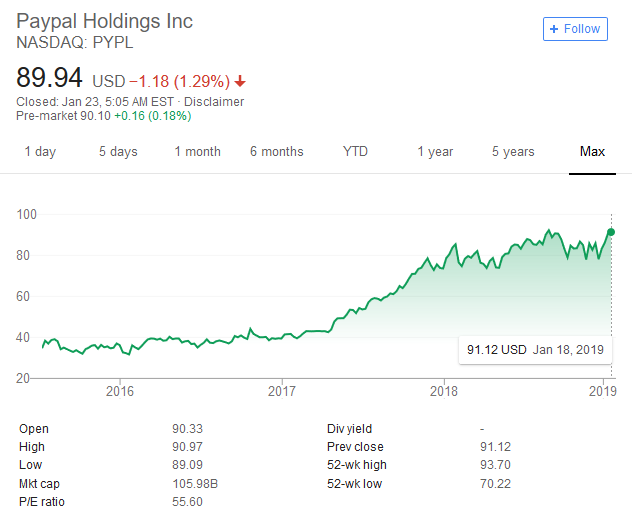 PayPal currently has a market cap of $106 billion, compared to the $31.5 billion of eBay, which has been in free fall over the past year. 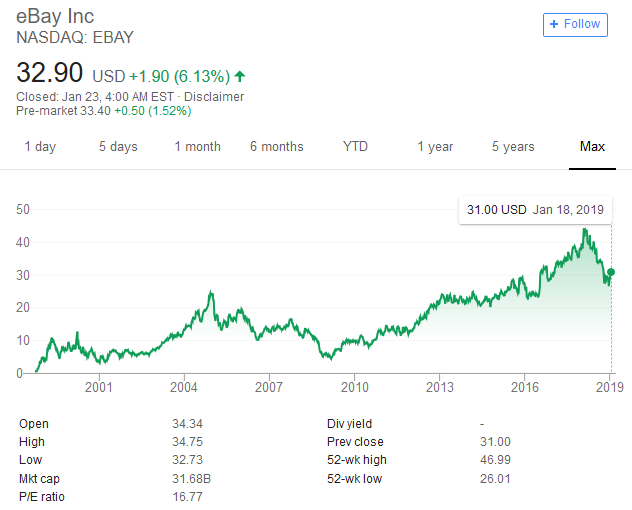 The latest so-called “activist investor” to join the eBay-bashing fraternity is hedge fund Elliott Management, which revealed yesterday in a letter — one that has its very own website — that it now owns more than four percent of eBay. As such, Elliott Management wants to see some big changes happening at eBay, which it said is massively underperforming on its potential.

“Despite its platform value and asset base, however, eBay as a public company investment has underperformed its peers and the market for a prolonged period of time,” explained Elliott Management partner Jesse Cohn in the letter. “This underperformance has been disappointing for both shareholders as well as eBay’s employees, who rely on share-based compensation as a meaningful component of their remuneration.”

Elliott Management envisions eBay splitting into three pieces: The core eBay marketplace would be a single company, while its ticket marketplace Stubhub — which it bought in 2007 for $310 million — would be another. The third spinoff would be eBay’s classifieds unit, which operates under various brands around the world. For example, in the U.K., a classifieds site called Gumtree holds fort, with most people likely unaware that it’s owned by eBay given that it deliberately keeps the brands separate. Elsewhere in the world, eBay also runs a wider classifieds network including the likes of Kijiji, which is open in more than 300 cities across Canada, Italy, Hong Kong, and Taiwan.

So where does eBay’s money come from? Using its Q3 2018 earnings as a guide, eBay claimed $2.6 billion in revenue, of which $2.1 billion was attributed to the eBay marketplace. StubHub drove revenue of $291 million, while Classifieds was responsible for $254 million. On the surface, it seems that the core marketplace is the big money-earner for eBay, but according to Elliott Management, this may not be reflective of the businesses’ true values.

“StubHub and eBay’s portfolio of Classifieds properties represent high-value, strategic assets that are worth meaningfully more than the value currently being ascribed to them as part of eBay,” Cohn noted. “In addition to unlocking substantial value, separating these assets would allow eBay’s management team to refocus its efforts solely on the core Marketplace business.”

As one of the leading players in the secondary ticketing market, StubHub is a major brand in its own right. And it’s one that doesn’t immediately “fit” with the eBay marketplace, despite efforts to cross-promote tickets and merchandise between the platforms. And it could be worth a good chunk of money on its own if it was allowed to flourish independently.

“StubHub is non-core to the eBay Marketplace but would command significant value as a market-leading, scale business,” Cohn said. “StubHub remains the market leader with a dominant consumer mindshare. Based on StubHub’s strong performance, attractive growth outlook, healthy economics and market-leading position, we believe that StubHub represents $3.5 – $4.5 billion of value relative to a value of just ~$2.2 billion if capitalized at eBay’s consolidated valuation multiple today.”

Similarly, given that many of its local classifieds groups are already leaders in local markets globally and operate for all intents and purposes autonomously, it may make sense to spin this group off too.

“Given its attractive financial profile and strategic positioning, we are confident that eBay Classifieds Group can realize significant value through several alternative transaction structures, including a sale or a spin,” Cohn continued. “Accordingly, we believe that eBay Classifieds Group represents $8 – $12 billion of value, relative to a value of just $4.5 billion if capitalized at eBay’s consolidated valuation multiple today.”

Sum of its parts

Going by these numbers, if eBay were to do nothing to its current business other than spin out StubHub and Classifieds, the core marketplace may only be worth around $15 billion on its own — that’s if we use eBay’s current market cap and the upper end of Elliott Management’s valuation for StubHub and Classifieds, which puts them at $16.5 billion. These may not transpire to be realistic estimations, but it’s still indicative of a problem that has plagued eBay for years, and it suggests that eBay as a business is not bigger than the sum of its parts.

Indeed, eBay has often struggled to find real synergy across its products. At its heart, eBay is a marketplace where anyone can buy and sell just about anything, but it has branched into multiple verticals. It acquired PayPal for $1.5 billion in 2002, and while PayPal was tightly integrated into the eBay platform, serving as an eBay subsidiary ultimately prevented PayPal from realizing its potential — spinning it out in 2015 was probably the smart move.

Elsewhere, in a somewhat unusual move, eBay bought Skype in 2005 for $2.6 billion. This also proved to be a poor fit. In April 2009, eBay revealed its intentions to spin off Skype into an independent public company, though instead it wound up selling 65 percent of the business for $1.9 billion to Andreessen Horowitz, Silver Lake, and the Canada Pension Plan Investment Board. Fast forward less than two years, and Microsoft bought Skype for $8.5 billion, meaning that while eBay recouped most of the money it paid for Skype, the majority of the new shareholders cashed in big time.

Now with StubHub and Classifieds being elbowed out by activist investors, it looks like eBay is being systematically stripped for parts.

But besides serving as cash cows in a potential sale, Elliott Management reckons that offloading StubHub and Classifieds would enable eBay to get back to basics and focus on the thing that everyone knows it for: a peer-to-peer marketplace for selling things.

“Rather than having to decide where to allocate resources — both capital and mindshare — eBay would be free to devote the entirety of its attention to Marketplace, while a separate Classifieds Group and StubHub would be run in a manner best aligned with their outlook and investment needs,” Cohn said.

And even without operational changes, the eBay marketplace on its own could be a far more tempting acquisition for big players such as Walmart or Google, according to a separate CNBC report yesterday, quoting “a person familiar with the matter.”

Failing all that, Elliott Management outlines in its plan how eBay could nearly double its value by the end of 2020 without divesting StubHub and Classifieds — but it will involve major improvements across strategic direction, execution, capital allocation, and leadership.

Whatever happens at eBay, it seems likely that major change is coming in the near future.