If you’re in the trucking business, there’s a phrase you reliably dread: driver detention. It’s the length of time spent idling at shipper or receiver facilities, and it has the potential to cut drivers’ pay drastically — or worse, increase the likelihood they’re involved in an accident. According to a recent report published by the U.S. Department of Transportation (DOT), detention causes truckers an average annual loss of between $1,281 and $1,534, and spending just 15 minutes beyond a two-hour detainment window causes crash risk to climb 6.2 percent.

To reduce the occurrence of overly long waits and other issues, Uber is introducing a new feature in Uber Freight — the cargo-hauling trucking platform built on its on-demand transport infrastructure — that enables drivers to provide feedback to facilities just as they might a ride-hailed car. It’s called Facility Ratings, and it lets carriers and their drivers rate facilities on a scale of one to five and leave written comments about their experiences.

Facilities aren’t just where truckers pick up and drop off parcels and palettes — it’s where they take bathroom breaks, grab a bite to eat, or even spend the night, and some facilities do a worse job of servicing those needs than others. According to a Zipline Logistics survey, 80 percent of respondents refuse to take loads from certain facilities because of their reputations.

The idea behind Facilities Ratings is to provide a Yelp-like forum where drivers can highlight pain points — and high points — somewhat discretely, all within the Uber Freight platform. They have seven days to submit a review after they stop by a facility, Uber says, a limit imposed to ensure reviews are submitted while the details are still fresh in drivers’ minds.

Ratings, written comments, and amenities info (such as the availability of restrooms, overnight parking, food options, onsite scales, and driver rest areas) are available to drivers and carriers through the Uber Freight smartphone app. And they’re exposed to facilities managers, who can view through a dashboard not only the ratings themselves, but per-driver stats like total pickups, average rating, and detention spend.

The hope is that Facilities Ratings will motivate changes that increase not only favorability, but also efficiency. The DOT estimates that delays cost truckers around $1.1 billion to $1.3 billion each year, a portion of which gets passed on to shippers. If detainments could be minimized and wait times reduced, the positive effects would be felt industry-wide.

“To maintain a healthy, efficient supply chain, it’s key to prioritize carrier needs and feedback,” said Nestlé North America Procurement, an Uber Freight customer. “The data that Uber Freight is providing with Facility Ratings in their platform is a great validator for making improvements to our operations, whether that means reorganizing personnel shifts or even moving to a bigger facility. I’ve never seen this granular breakdown and level of visibility into facility activity before — it’s eye-opening, and exactly the kind of data we want to look into.” 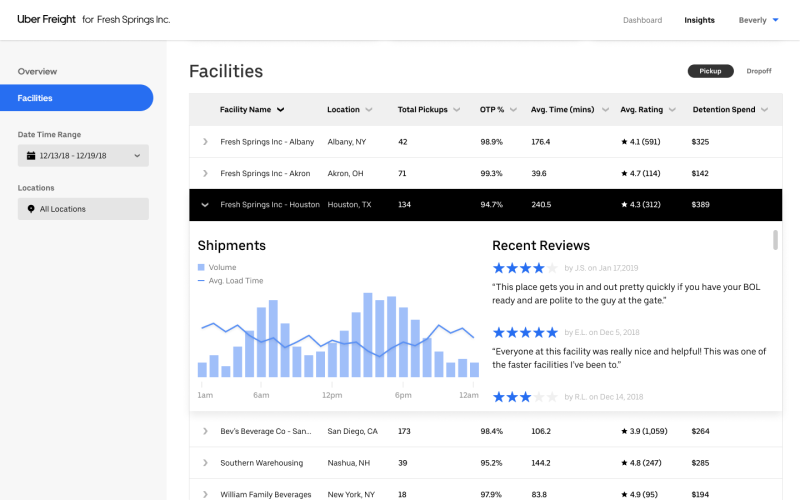 Uber says that Facilities Ratings, which it has been piloting for the past two months and which has already amassed ratings for over 10,000 facilities across the country, will be available to all users in the carrier app today and will roll out to all shippers via Uber Freight for shippers — a platform that allows small and mid-sized businesses to tap into Uber’s network of carriers and drivers for freight delivery — in the coming weeks.

Uber Freight, which launched in May 2017, is Uber’s grab at the $8.1 trillion global logistics transport industry. Simply put, it connects carriers and drivers with companies that need to move cargo, and it’s off to a promising start — Uber says that Freight remains one of its “fastest-growing and most promising businesses.”

When a business schedules a delivery through the Uber Freight for shippers, they get prices upfront in the Uber Freight app. Customers are matched intelligently to carriers in Uber’s network and see a real-time, mutually agreed-upon quote that’s determined by market conditions and “other factors.” For recurring shipments, there’s the recently introduced Lane Explorer feature, which leverages machine learning to assess dynamic factors and generate rates for each of the next 14 calendar days out.

Freight’s got plenty in the way of competition. Seattle-based Convoy, which raised $62 million in 2017 from backers including Jeff Bezos and Bill Gates, boasts a platform — Dynamic Backup — that builds routing guides from real-time, guaranteed prices for contractual freight. And Transfix, which operates in New York, has an online marketplace that matches loads to drivers.

But Uber’s not giving up the fight, and in August, it more than doubled its investment in Freight.