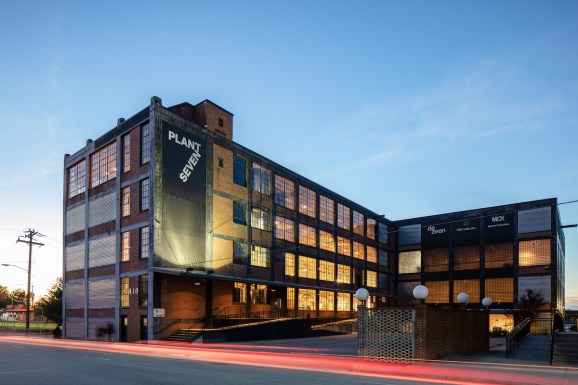 At one time, an estimated 60 percent of all furniture made in the U.S. was produced within a 150-mile radius of High Point—leading the North Carolina city to be dubbed the “Furniture Capital of the World.” During that period, the local economy thrived on Made in America manufacturing. But as manufacturers saw the benefits of lower costs overseas, outsourcing became common across the country. Plants were shuttered as furniture production moved to China, taking with it jobs and the city’s leading industry.

While High Point embraced diversification through other industries, such as aerospace, supply chain and logistics, innovative manufacturing, life sciences, and specialized business services, the city held strong to its furniture roots. It maintained its “furniture capital status” by focusing on events — twice a year transforming into a bustling hub of economic activity as it welcomes 75,000 visitors to the High Point Furniture Market. But the metro area, following in the footsteps of small to mid-sized cities like Youngstown, Ohio and Spartanburg, South Carolina, is still trying to figure out how to maintain its expertise in an industry that’s being rapidly transformed by technology.

Bringing the furniture industry into the digital age

Technology has drastically changed how furniture is made, so why not apply the incubator model used to foster tech companies to furniture manufacturing?

Enter Plant Seven, a center for design innovation housed in an approximately 98,000-square-foot 100-year-old renovated hosiery factory in High Point. Thanks to $3 million in public and private investment, Plant Seven will offer coworking space for independent makers and designers looking to revitalize the region with smart technology. The building will also include a 3D printing lab and high-tech materials library (the largest materials library on the East Coast, outside of New York City).

Modeled after the Brooklyn Navy Yard, Plant Seven will act as an incubator for furniture makers and designers, and it aims to attract entrepreneurs priced out of higher-cost locations like New York City once it’s fully operational in April 2019.

“We’re trying to encourage people to get excited about the furniture industry, to show young people that it’s not your grandfather’s business,” Plant Seven founder and CEO Tim Branscome told Architectural Digest.

A fresh outlook for cities rooted in traditional industries

Nearby Greensboro is going through a similar transformation. Located less than 30 minutes from High Point, Greensboro was once dominated by textile manufacturing. While the industry still has a major imprint on the community — which boasts name brands such as Wrangler (now part of Kontoor Brands) — new spaces to foster tech growth have also sprung up. Take HQ Greensboro, a nearly 11,000-square-foot coworking space located in a 117-year-old building in historic downtown Greensboro. Launched in 2015, it now has more than 200 tenants, members, and partners and is expanding into a 106,000-square-foot former denim overalls manufacturing plant.

Just down the block from HQ Greensboro, in an old blacksmith building, is the Forge — one of the largest maker spaces in the Southeast. Launched as a grassroots organization for hobbyists in 2014, the Forge has since grown to 200 members and 30+ entrepreneurs who are building businesses and prototyping new inventions. Like Plant Seven, it wants to capitalize on Greensboro’s reputation for making things and promote great-paying careers in trade industries that are experiencing a global shortage.

Can places like High Point and Greensboro maintain their titles as industry epicenters by investing in high-tech coworking and prototyping spaces for entrepreneurs in those fields?  Research from the Brookings Institution on cluster initiatives shows that such efforts can be successful, but to create a robust ecosystem, private and public stakeholders need to ensure all the puzzle pieces are in place. This means investing in real estate, as well as trade programs and research universities that can train the necessary industry talent.

It will be years before High Point is able to measure the full impact of Plant Seven’s efforts. In Greensboro, the Forge and HQ Greensboro have already been successful in changing the layout of their downtown area, attracting more restaurants and art galleries to what the city is now calling an “innovation district.” But, overall, the city is still losing young people,.

In spite of the challenges ahead, High Point and Greensboro’s trajectories demonstrate that cities need to embrace entrepreneurship and figure out how to successfully train the next generation of talent if they hope to retain cultural and economic relevance in an increasingly tech-driven future.

Kathryn Elliott is director of the Belk Center of Entrepreneurship of High Point University.