Signal Sciences, a security platform for web applications, has raised $35 million in a series C round of funding led by Lead Edge Capital, with participation from Index Ventures, CRV, Harrison Metal, and OATV.

Founded in 2014, Culver City, California-based Signal Sciences offers a modern web application firewall (WAF) and runtime application self protection (RASP) security product as part of a software-as-a-service (SaaS) subscription. A WAF’s raison d’être is to monitor HTTP traffic and block threats to specific web applications, as opposed to standard firewalls, which operate at the server level.

Signal Science’s WAF offering runs directly inside a company’s web servers or the application code, and can block all manner of nefarious cyber shenanigans, such as denial of service (DoS), SQL injection, account takeovers, and more. It also works with the broader DevOps ecosystem, with integrations into the likes of JIRA, PagerDuty, DataDog, and Slack. 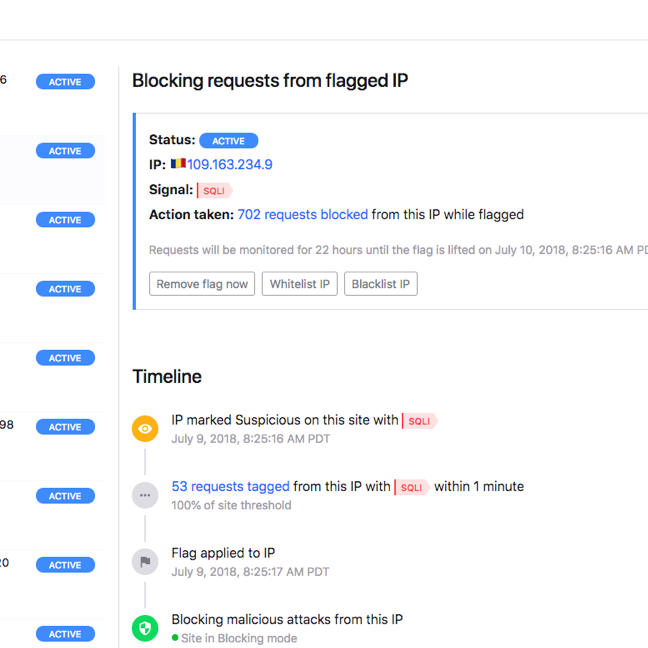 Above: Signal Sciences in action

Prior to now, Signal Sciences had raised $26.7 million, and with another $35 million in the bank, it said that it plans to “double down” on expanding its WAF security platform.

“We’re doubling down on engineering innovation and partnerships to deliver maximum security value for our customers as well as expanding key areas of our business to drive continued growth,” Signal Sciences founder and CEO Andrew Peterson said. “2019 will be a massive year for Signal Sciences.”

The global WAF market is expected to reach $5.5 billion by 2022, according to some reports, up from $2.4 billion in 2017. There are a number of players in the field, including long-established names such as Imperva, a formerly public company that was taken private last year as part of a $2.1 billion acquisition. Other fledgling WAF platforms include Threat X, which raised $8.2 million last year.

“The skyrocketing numbers in the web app security market shows the desperate need for better protection in today’s dynamic threat landscape, and Signal Sciences has set a new standard with automation and integrated technology that work at digital speed and enterprise scale,” added Lorrie Norrington, Lead Edge Capital operating partner, who also now joins Signal Sciences’ board of directors. “This is what market-changing technology looks like, and it’s providing the protection for business-critical apps that companies need today.”

Signal Sciences counts a number of big-name customers, including Adobe, WeWork, and Under Armour, and today has 150 employees in offices across Culver City, New York City, and Tokyo.