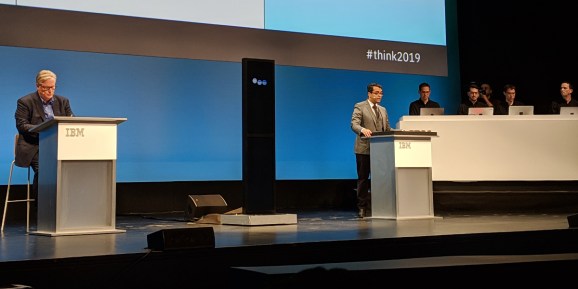 IBM’s Project Debater, an AI system that can engage in live debate with humans, today faced off with 2016 World Debating Championship grand finalist and 2012 European Debate champion Harish Natarajan. The debate was about preschool subsidies, with Project Debater arguing in favor and Natarajan arguing against.

More than 50 percent of the audience at the Yerba Buena Center for the Arts in San Francisco said in a poll taken after the debate that Debater enriched their knowledge of the subject, while about 20 percent said the same of Natarajan’s argument.

The competition took place ahead of IBM Think, a conference being held this week in San Francisco.

Natarajan and Debater were informed of the debate topic 15 minutes in advance. Each participant was given a total of eight minutes to share an opening argument, a rebuttal, and a two-minute closing argument.

Debater argued in favor of preschool because, among other things, it can benefit the impoverished, set students up for success, and reduce crime rates. To make these arguments, Debater cited a broad range of sources, including National Institute for Early Education Research and the Centers for Disease Control and Prevention.

Debater’s opening argument and rebuttal focused on the importance of doing what’s considered morally right by humans. “Giving opportunities to the less fortunate is a moral obligation of every human being,” Debater said, after questioning whether her opponent (Debater is a female, its creators said) would rather have the poor on his doorstep.

“It’s basic human decency,” Debater said in reference to welfare, calling it the same as extending a helping hand to someone who has fallen.

For his part, Natarajan argued that preschool subsidies could be spent better elsewhere in order to help the most disadvantaged and that such subsidies are principally a politically motivated handout for the middle class.

Debater and Natarajan had never spoken prior to the debate. By contrast, debaters who faced the arguing AI in its public debut last summer were given several opportunities to interact with the system ahead of time.

Debater is trained by billions of sentences from newspaper articles, Wikipedia topic pages, and other sources of knowledge. Watson conversational AI was used to convert speech-to-text as part of the process.

Following the creation of AlphaGo and defeat of Go champion Lee Sedol, DeepMind continues to make systems that beat human professionals in games like Starcraft II.

Last week, the Allen Institute for Artificial Intelligence rolled out AllenAI, a system made to collaborate with people in a Pictionary-like game. The object of this system is to teach AllenAI how to cooperate with a human and gain what we consider common sense. In future, AllenAI might take the Turing Test to see if people can discern whether they’re playing with a human or machine.

The debate on preschool subsidies was moderated by John Donovan, host of Intelligence Squared US.

“It’s not like ‘Oh now Project Debater is the only way that you’re going to debate’. [They have] pluses and minuses, the machines that debate, [and] humans do as well,” Gil said. “But the question is because they argue differently, they use facts differently, is the resulting experience enriching to us? Does it add something to the conversation?”