A quick scan of the venture capital (VC) landscape reveals that many funds differentiate by their area of focus. Some are focused on one specific region, for example, while others are geared toward a particular kind of technology or a stage-specific company.

London-based InReach Ventures, however, pitches itself as the “AI-powered VC firm,” and today it announced the close of its first official fund at €53 million ($60 million).

Needle in a haystack

Once most VC firms identify an investment prospect, they rely on meticulous research to evaluate the risks involved. These vary depending on what stage a company is at, with seed or series A-stage ventures generally more risky than profit-making companies that are already mulling an exit. But one challenge is orders of magnitude greater than performing due diligence, and this is finding companies worth getting excited about in the first place.

Startups seeking funding often gravitate toward a key technology hub, be that Silicon Valley, New York, or London. And these pockets are where VCs often look when seeking out their next investment. Finding entrepreneurial upstarts elsewhere isn’t as easy, particularly in regions such as Europe, where VCs have to spend considerable time traveling to outposts and meeting thousands of startups each year. And what about startups that aren’t actively seeking investment but would consider funding if it fell into their laps?

These are challenges InReach Ventures is hoping to solve with big data, analytics, and artificial intelligence (AI) as it sets out to find the next big thing in Europe.

InReach Ventures was founded in 2015 by former Balderton Capital partner Roberto Bonanzinga, alongside ex-Yammer and Microsoft engineer Ben Smith and former Balderton general counsel John Mesrie. The VC firm has spent around €3 million ($3.5 million) developing a proprietary search platform, referred to internally as DIG, that tracks all manner of data points to discover and evaluate early-stage startups. This may include trawling LinkedIn or Facebook profiles for changes and monitoring company recruitment pages, website traffic, and much more.

In many regards, InReach looks a lot like its potential portfolio companies — data is its currency, more than half of its employees are software engineers, and it has its very own chief technology officer in Smith, who was the primary developer behind the DIG platform.

“From day zero, the firm was set up with a unique mind-set and a strong product and technology DNA,” Bonanzinga told VentureBeat. “This is the only venture firm in which there are more software engineers than investors.” 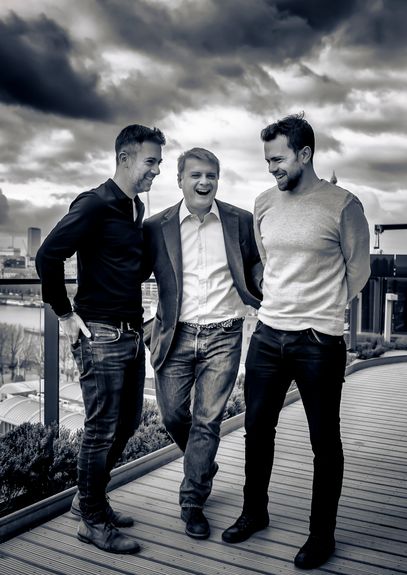 “The data layer is a mix of massive data aggregation, with deep data enhancement, including the generation of a large set of original data,” he said. “The intelligence layer makes sense of these millions of data points through an ensemble of machine learning algorithms, ranging in complexity from simple rules to advanced networks. Given this data-driven approach and the significant deal-flow this generates, we invest heavily in building a workflow product that allows us to efficiently process thousands of companies each month.”

To be more precise, Bonanzinga said the company analyzes around 2,500 startups each month, more than many other traditional VC firms would get through in a year. But he stresses that the platform isn’t automating decision-making for its investments; instead, it’s interested in making the VC process more efficient, scalable, and informed.

InReach Ventures already has 11 startups in its portfolio, spanning Sweden, Hungary, Italy, Spain, Finland, Germany, the U.K., and Lithuania. In fact, Lithuania is home to InReach Ventures’ very first exit — ecommerce juggernaut Shopify snapped up Oberlo back in 2017 for a reported $15 million.

The myriad locations of InReach Ventures’ portfolio companies also hints at one of the platform’s biggest selling points: It helps find startups off the beaten track. But that only conveys part of the picture. The DIG platform also unearths promising startups that aren’t actively seeking money. Moreover, adopting a data-driven approach saves investors from having to constantly travel around Europe just to meet a handful of startups at a time.

“Our technology platform allows us to take a geographically agnostic approach so that we can uncover the most promising startups from anywhere in Europe,” Bonanzinga continued. “More importantly, however, we are turning the traditional VC model on its head by taking a proactive, data-driven software approach to early-stage investment across Europe. Proactivity is the key. The traditional VCs in the main hubs are still passively waiting for entrepreneurs to go to them. We hunt for the most promising startups, often targeting them even before they have started any fundraising process.”

It’s worth noting here that InReach Ventures’ investments up until now have not come from a traditional “fund” in the legal sense of the word — instead, the firm created what it called a “non-institutional investment structure” to back its startups. That all changes with the closure of this new fund, however.

InReach Ventures is one of a growing number of VC firms that crunch data as part of their investment strategy. Sweden’s EQT Ventures has developed a machine learning system called Motherbrain to find fledgling startups that might otherwise fly under the radar. But both EQT and InReach were preceded by San Francisco’s SignalFire, which was founded in 2013 by Chris Farmer, a former VC at Bessemer Venture Partners and General Catalyst Partners. SignalFire has been tracking billions of data points across millions of startups globally for six years.

“We like SignalFire and its founder Chris a lot, and we have a common passion for data and the use of technology,” Bonanzinga said. “SignalFire’s approach is perfectly designed for the transparent Silicon Valley ecosystem, which is based on a highly concentrated social graph of entrepreneurs, investors, and talent. Europe’s geographic fragmentation and lack of transparency requires a different approach that is focused on discovery, albeit still powered by data and technology.”

This is the strongest clue we have that InReach Ventures has no intentions of expanding its scope beyond Europe. “We believe in focus,” added Bonanzinga.

The Moneyball investment strategy is gaining steam elsewhere in the technology sphere. A few months back, news emerged that European technology conference Web Summit is planning a $50 million VC fund to leverage startup data from its annual mega event. The conference has grown from a modest 400 attendees in 2011 when it was still based in Dublin to more than 60,000 in 2018, with Lisbon now serving as its home. Data science has actually played a big part in Web Summit’s evolution, so it’s notable that it is now creating a sizable investment fund off the back of its gargantuan arsenal of data.

While there is a marked trend here, something we will likely see even more of across the investment spectrum, Bonanzinga isn’t convinced data solutions will always be the real deal.

“I predict a new hype — the rush of needing to check the box of ‘We have a data strategy’,” he said. “We will have many firms with 30-plus investment professionals and a data engineer in a corner. The real question is how many firms are willing to transform their professional service DNA into a product DNA? As always, this is more of a people/organisational question, rather than a question simply of the use of technology.”