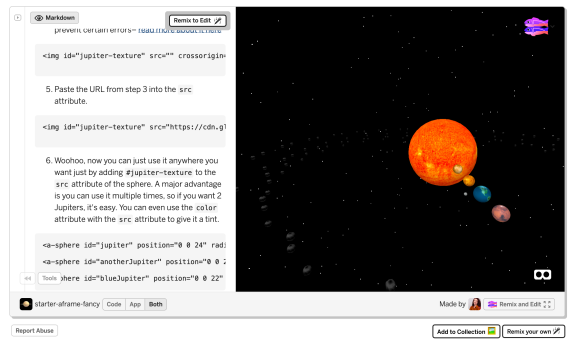 Virtual reality experiences have historically been islands — unconnected apps and videos, sometimes platform-specific — but the past year has seen efforts to tie them together using device-agnostic tools and portals. Mozilla’s vision has been to leverage the web and browsers for VR, and now it’s launching a free WebVR “starter kit” developed with web and app development community Glitch.

Their kit is a five-part video course accompanied by interactive code examples, designed to help developers learn to use A-Frame, a free WebVR development framework. A-Frame creates VR content that can be viewed on HTC Vive, Oculus Rift, Google Daydream, and Gear VR headsets, as well as desktop and laptop PCs, including everything from complex 3D animated objects to 360-degree panoramas.

“Our hope is that this starter kit will encourage anyone who has been on the fence about creating virtual reality experiences to dive in and get started,” Mozilla explained in a blog post today. To that end, interactive code examples are presented on Glitch’s site alongside step-by-step instructions and a viewing window, enabling developers to see how a “remix” of the code changes the VR output.  One example lets you play with textured planets from our solar system, adding and editing spheres using simple HTML code.

Glitch’s Intro to WebVR is free and available now. Additional examples of A-Frame WebVR apps can be seen here.