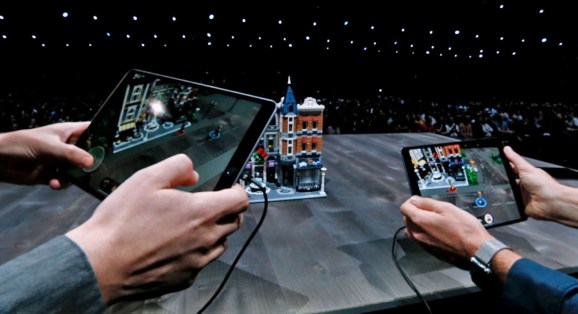 Early last year, pundits tried to declare virtual reality “dead” while hyping augmented reality as the next big thing, but in the real world, AR has gotten off to a weak start. Sales of both consumer and enterprise AR headsets have been weak, software development has been modest, and hyped demos have seen questionable results. AR has had one big hit — the smartphone game Pokémon Go — but nothing else has come close.

One clue as to what’s going on is that Casanova is a senior director, which on the Apple totem pole is steps below marketing senior VP Phil Schiller and marketing VP Greg Joswiak, the company’s prior AR point man. Since ARKit launched in 2017, AR has just been a feature of iOS — merely a fraction of one piece of the company’s software business — and arguably not important enough to fully occupy a key marketing employee’s time. Naming Casanova to a dedicated AR marketing position suggests that’s about to change.

But given Apple’s obvious interest and investments in AR, it’s fair to ask whether Apple waited too long to create this position. Shouldn’t it have had someone working on this two years ago, just ahead of ARKit’s launch?

My view is “yes.” Apple has had plenty of AR news to share for the past 20 months, but its AR messaging has seemed decidedly up and down during that time — it hits, then disappears, and never seems to be making either a huge post-event impact or becoming a constant part of popular discussion. A dedicated Apple marketer might have spent the past two years making AR seem more viable than it does today.

Even so, Apple’s engineers and executives haven’t hesitated to push AR. They launched ARKit with on-stage 2017 WWDC demos, a spotlight in iOS 11’s press release, and hands-on game demonstrations. There have been third-party ARKit developer announcements, and even AR-focused ads and web page debuts. At the 2018 WWDC, ARKit 2.0 had an even bigger presence, including its own press release, a new hands-on demo area, and an AR object format co-developed with Adobe. Apple AR hardware development chief Mike Rockwell even made his first public appearance for the company at the event.

One might say that all of these developments received either ample or appropriate levels of press coverage even without an AR marketing chief leading the charge. But my belief is that Casanova has the potential to create a bigger and more consistent AR story for Apple — potentially one where a timeline of exciting upcoming software and/or hardware releases continues to generate and even turn up the heat for AR over time.

From where I stand, that sort of marketing — backed by legitimately worthwhile products — is highly necessary to reignite interest in AR at this stage. Apart from Pokémon Go, which had the benefit of a massive pre-existing fan base and Nintendo series name recognition, and free social media AR face-augmenting apps, average people don’t seem anywhere as interested in augmented reality as Tim Cook or numerous fellow technologists. There’s been no shortage of AR software announcements, such as furniture placement and virtual clothing try-on apps, but scant evidence of consumer interest.

Good marketing might change that, though Apple now has an uphill battle to reverse AR’s history of overpromising and underdelivering. Great marketing might even convince people to spend hundreds of dollars on eventual Apple AR hardware. I’m actively looking forward to seeing Apple make that pitch in the not-too-distant future.