Here Technologies, the company behind the popular mapping and location platform, has revealed that it’s investing €25 million ($28 million) in a new machine learning research institute that will crunch geolocation data on an industrial scale.

The Institute for Advanced Research in Artificial Intelligence (IARAI), as it will be known, will be based in Vienna, Austria. Here stresses that despite its financial backing, the institute will be an independent entity, led by Dr. Sepp Hochreiter, a professor at Johannes Kepler University’s Institute for Machine Learning; and Dr. David Kreil, a data science lead at Vienna’s Boku University.

Here will, of course, provide its location-based datasets and wider expertise, while in return it will be able to access any new technologies that emerge from the hub. The IARAI will serve to research machine learning technologies that will “deepen the location intelligence needed to build an autonomous world,” according to a statement issued by the company.

“The IARAI and Here bring together, for the first time, the wider scientific community and real-world location data on a grand scale,” Dr. Kreil said. “This raises unique opportunities for academic research and industrial applications.”

Here is one of the world’s major mapping platforms alongside Google Maps and TomTom, emerging as a result of Nokia’s $8 billion acquisition of digital map data company Navteq in 2007. Nokia rebranded Nokia Maps as Here in 2012, before selling the unit for $3 billion to a consortium of German car manufacturers three years later. Though Here does offer some consumer-facing applications of a similar vein to Google Maps, third-party licensing is its core business.

Here hasn’t given any indication as to when the IARAI will be open for business, but when it does, its core raison d’être will be to bring more location awareness to the burgeoning autonomous vehicle industry, enabling more accurate maps that update in real time, improve traffic predictions, and offer municipalities better data for their building projects.

“The IARAI is our gateway to build the next generation of location services, from self-healing maps to high-level automation, through leading-edge AI research,” added Peter Kürpick, who was also revealed as Here’s new chief technology officer as part of this announcement. “Here sits on unique data and mapping assets. By focusing on deep learning and the large-scale testing of that data, the institute will expand our understanding of how location can be represented through neural networks, the core components that will fuel these next-level location services.”

Here has long sought new ways to put its location-based data platform to use in new scenarios. A few weeks back, it launched a new consumer app called SoMo for planning and sharing rides — given that it’s built on Here’s infrastructure, the app can optimize routes based on the time of day, distance, and more. And last year, Here launched XYZ, a geospatial data management and mapping platform that makes it easier for developers and cartographers to create maps. 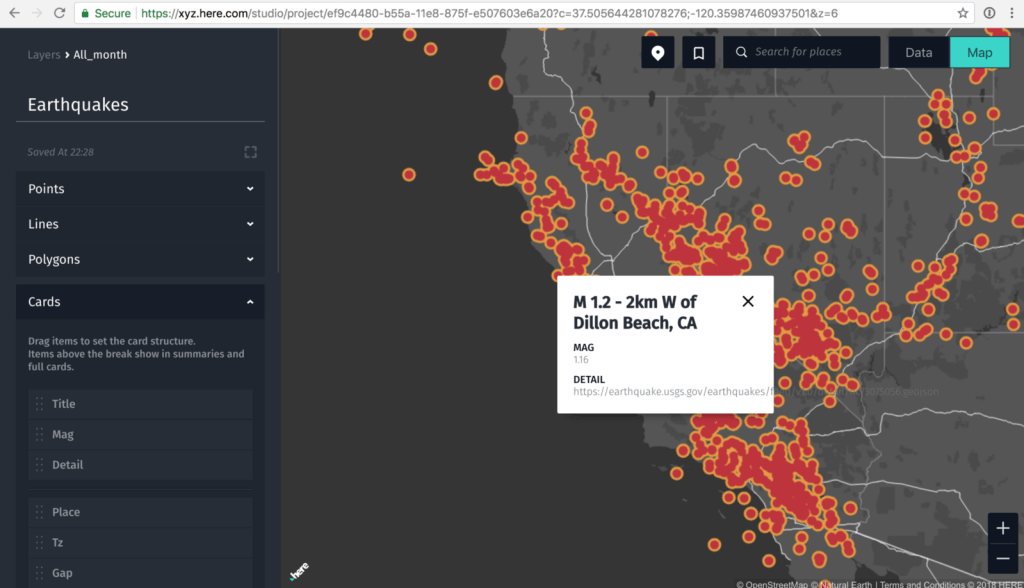 With the growth of satellite navigation, smartphones, and the internet of things, location intelligence has emerged as the cornerstone of countless businesses — real-time navigation apps, insurance underwriting, geotargeted advertising, and countless more. And as more devices go online, the value of location data will only increase as companies, consumers, and conurbations try to garner more meaningful insights from this trove of geospatial information.

Urban mobility in particular is one sphere that is ripe for big location-data disruption. Earlier this week, Microsoft, TomTom, and Moovit revealed they were pooling their various transport, data, and cloud processing smarts so developers can integrate more multi-modal transport options into their own applications. And last month we showed how StreetLight Data draws meaningful insights from trillions of location-based data points collected from millions of smartphones — all to help cities plan their infrastructure projects better.

Here often flies under the radar compared to the likes of Google Maps, but it is a major player in the location data realm. Now it wants to draw more meaning from this data, and use it to improve machine learning models for countless autonomous applications.

“The unique data and expertise that Here offers for open academic research is a game-changer for the construction of realistic AI models,” Dr. Hochreiter continued.

Here’s $28 million investment will run over a five year period, and will cover funding for the physical space itself and hiring for 30 research positions.