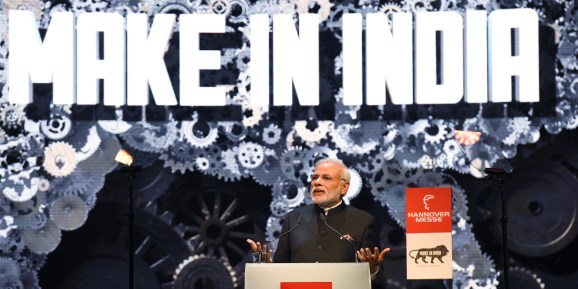 In 2014, a year after Amazon launched its shopping site in India, CEO Jeff Bezos made a splash visit to the nation. Dressed in formal Indian wedding attire, he climbed up a brightly painted truck with an oversized $2 billion check.

Bezos couldn’t contain his excitement about India, home to the second-largest internet population. “We have surpassed our highest expectations for how fast Amazon India has grown,” he said in a televised interview around the time. When asked what he thought of the local regulations in the country, Bezos responded, “India is a very good place to do business in.”

For years, India has wanted foreign companies to thrive in the country. When the Bharatiya Janata Party (BJP) took power in 2014, one of its early major pushes was to formulate plans and structure incentives to attract foreign investment. In 2015, Prime Minister Narendra Modi unveiled plans to liberalize the foreign investment rules. “India is unstoppable on the path of economic progress [and] … wants the world to see the tremendous opportunities it offers,” he said, ahead of a trip to the U.K. He also visited the U.S. and met with top Silicon Valley executives, nearly all of whom subsequently expanded their commitments in India.

Later, the government was accused of turning a blind eye to the creative ways Amazon was violating FDI norms (ecommerce policies) in India. It further introduced lofty incentives to encourage companies to participate in Make in India and Digital India, a set of state-run initiatives to drive job growth in the nation.

But over the past year, in the run-up to the general elections in May, the Indian government has unveiled — and in many cases, enforced — a wave of sweeping changes. It now dictates how foreign companies handle and make use of Indian user data and other aspects of how ecommerce platforms operate, and it is working on introducing greater oversight for technology platforms.

In April, the Indian government issued a regulatory directive that required U.S. payment firms to store financial data of Indian users locally. The government said it needed the U.S. giants to comply to ensure “better monitoring” and added that “it is important to have unfettered supervisory access to data stored with these system providers, as also with their service providers / intermediaries / third-party vendors and other entities in the payment ecosystem.”

MasterCard and Visa, the two biggest card networks in the U.S., as well as lobby groups that represent Google and Facebook — both of which offer payment solutions in India — spent months fiercely opposing the directive. They were joined by as many as 30 U.S. senators, who urged India to rethink its stand on data localization. “We see this (data localization) as a fundamental issue to the further development of digital trade, and one that is crucial to our economic partnership,” the senators wrote in August.

Despite intense lobbying and public outcry from various corners of the U.S. government, India refused to extend the six-month deadline. With no choice left, American giants complied with the directive in October of last year. Little did these companies know, the Indian government was just getting started.

In late December, India revised its ecommerce policies to levy new restrictions on how Amazon and Walmart-owned Flipkart sell products in India. The two ecommerce companies are still scrambling to minimize the damage these revised policies have inflicted on their businesses.

Tens of thousands of items — if not more — disappeared from Amazon and Flipkart overnight when the revised policies went into effect earlier this month. And these products remained unavailable as the companies began to cut ties with sellers in which they had a financial stake (per the new policies, a foreign player cannot be affiliated with sellers it conducts business with) and worked to restore some items.

Amazon and Walmart, which made a massive $16 billion bet on India last year, are not the only Silicon Valley companies to have found themselves on the receiving end of what many describe as increasingly hostile regulations introduced by the government.

Lobby groups that represent U.S. companies and industry watchers say they see an extreme shift from the “warm, welcoming, collaborative” approach the government exhibited in 2014. “In the past year or so, the engagement has been combative, with abrupt, disruptive policy changes that are being held without consultation, and, unusually, with absolutely no room for negotiation or even deadline extensions — as we saw with data localisation and FDI in ecommerce,” Prasanto K Roy, a technology and policy analyst, told VentureBeat.

Last month, Aruna Sundararajan, secretary of India’s Telecommunications department, told a group of Indian startups that the government was working to formulate a new “national champion” policy to encourage the “rise of Indian companies.” A secretary of Sundararajan declined to comment on this upcoming policy.

This week, the Indian government began finalizing a regulatory directive detailing how it wants intermediaries (internet service providers, websites, apps, and services that rely on users to generate content) to operate in the nation. Any entity that has more than 5 million users in India will have to set up a local office, appoint leaders in the nation who would be deemed responsible for any trouble their platforms incurs in the nation, and build automated tools to identify and remove harassing, hateful, and harmful content. (This would significantly limit or end the so-called safe harbor laws in India that Silicon Valley companies enjoy in many nations. Under these laws, a tech platform isn’t held liable for any issue it creates as long as it takes some actions in good faith to fight bad actors. Some critics have likened India’s move to censorship in China.)

Nationalism is the theme tying together all the policy changes the Indian government has unveiled in the past year. “All these moves are aligned with rising nationalism in the run-up to May 2019 and are often further aligned with, possibly driven by, specific lobbies who are simply riding the nationalism wave,” Roy said. 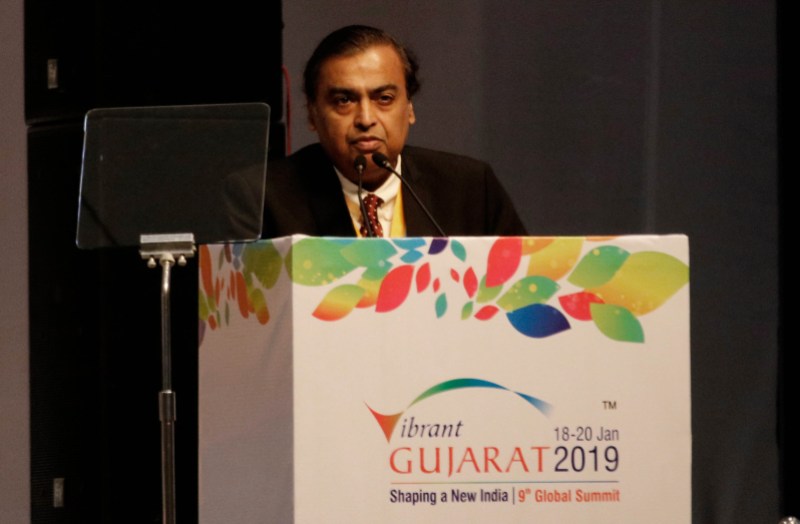 Perhaps no one who benefits from these moves more than Mukesh Ambani, the richest man in India and owner of Reliance Industries, the largest industrial house in the nation. As Amazon and Walmart were meeting with Indian government officials to ask for an extension for the revised ecommerce policy deadline, Ambani, an ally of Modi, announced that Reliance Retail, the largest retailer in the nation, is entering the ecommerce space.

In his announcement before a group of merchants and government officials, including Modi, Ambani said India needs to “collectively launch a new movement against data colonization,” similar to the movement Mahatma Gandhi led against political colonization of India. “For India to succeed in this data-driven revolution, we will have to migrate the control and ownership of Indian data back to India — in other words, Indian wealth back to every Indian,” he said, adding: “Honorable Prime Minister, I am sure you will make this one of the principal goals of your Digital India mission.”

The changes in the ecommerce policy, which put restrictions only on foreign capital, have huge implications for the $670 billion retail market. “It’s about making it difficult for foreign companies to operate in this market. Whereas, if you look at Ambani or Kishore Biyani [founder and CEO of Future Group, one of the largest brick-and- mortar retailers in India] or any other Indian who wants to operate in the market, they can continue to play with whatever norms they want. They are not governed by any of these concerns,” Nikhil Narendran, partner at law firm Trilegal, told VentureBeat.

The idea that the Indian government should favor domestic companies has been years in the making. Executives with Indian smartphone vendors, which once ruled the local market, urged the government two years ago to help them fight the onslaught from Chinese vendors. Around the same time, Sachin Bansal of Flipkart and Bhavish Aggarwal of ride-hailing firm Ola, suggested that India should replicate China’s model.

“What we need to do is what China did (15 years ago) and tell the world ‘We need your capital, but we don’t need your companies’,” said Bansal. Many have argued that India (and other countries) should focus on building its own ecosystem of companies, instead of giving it all away to Silicon Valley giants. Vivek Wadhwa, a distinguished fellow at Carnegie Mellon University and Harvard Law School, recently argued such a case. Wadhwa said India’s recent moves are “steps in the right direction,” though he added that the policies need some fine-tuning.

Some of the Indian government’s recent asks — including data localization — are arguably fair. “The government needs to have data in a reasonably fast manner,” Narendran said. But the way the Indian government wants to get there would require tech companies to reconfigure their global infrastructure, he said.

In the past, “such needs were balanced by reasonable protections, such as the intermediary liability safe harbor,” Roy explained. “We’re seeing that counterbalance of reason being lost to rising nationalism and fear-mongering.”

Facebook-owned WhatsApp, which will also have to abide by any intermediary regulation, has been facing some crucial challenges in India, its biggest market, for more than a year. The Indian government has been pushing WhatsApp to bring “traceability” to its platform so that it can find the origin of questionable content on the platform. At a media briefing in New Delhi earlier this month, Carl Woog, WhatsApp’s head of communications, reiterated that WhatsApp is committed to offering end-to-end encryption to users in India.

Hundreds of millions of users, but little revenue

As China continued to put up barriers to U.S. companies, India emerged as one of the last great markets for Silicon Valley companies. For years, Google, Facebook, and others have looked to India for their next billion users, Kunal Shah, founder of mobile payment service FreeCharge and finance service CRED, said at an event last month.

“All the global companies love to come to India because it is the farm of MAUs [monthly active users]. Facebook and Google love to give free internet here, because it creates these large MAUs that they can monetize on the global market. They don’t care about ARPUs (average revenue per user). And ARPU of a person in this country is nothing next to that of a user in the global market,” he added.

Silicon Valley companies have invested billions of dollars in the nation. In terms of user counts, their bets seem to be paying off. Both Facebook and Google have more than 250 million users in India. These companies, along with Amazon, identify India as their fastest-growing market.

But revenue-wise, India’s contributions to their bottom line is a blip, at best. Google generated $1.4 billion in revenue in India in the year that ended March 2018, compared to the $110.9 billion it generated globally. (The India-specific financial details are based on figures provided to us by Paper.vc, a research firm in India that tracks regulatory filings.)

During this period, Facebook posted $78 million in India revenue, compared to the $39.9 billion it reported globally. Amazon’s revenue in India, where it has invested $5.5 billion to date, stood at $754.2 million, compared to $177 billion globally.

Roy cautioned that the new regulatory push by the Indian government could make the nation less compelling to foreign companies. “If companies and their investment dollars are drawn in with promises of a progressive, competitive regime and then the laws suddenly change to stack the deck against them, perhaps supporting local companies, then clearly it’s less appealing for those companies to invest further — or for newer companies to invest,” he said.

And if India becomes less compelling for foreign companies, the resulting conditions could hurt Indian companies — contrary to the Indian government’s hopes. “Startups are not getting their funds from Ambani or Biyani. A large portion of their funding is coming from foreign VC firms. Moving forward, startups in the nation will have to become more reliant on domestic funding,” Narendran said.

In the coming months, we will find out how badly Silicon Valley companies want to win in India.