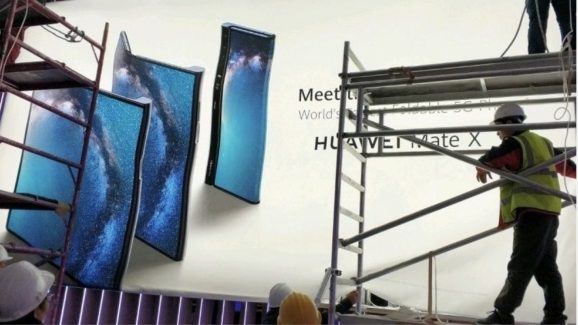 Huawei signaled earlier this month that it would reveal its foldable 5G phone at the 2019 MWC Barcelona, but the exact name and look weren’t confirmed until today. Say hello to the Huawei Mate X, which leaked (via Slashleaks) in this poster revealing the “World’s ___est Foldable 5G Phone.” Scaffolding prevents one from knowing for sure whether it’s being called the world’s “Tallest,” “Fattest,” or “Fastest” such device, but the last option is most likely.

The Mate X comes right on the heels of Samsung’s launch of Galaxy Fold, a $1,980 mini tablet with a 7.3-inch screen that folds closed, leaving a separate 4.6-inch screen on its exterior. Huawei’s design appears to use a single screen that remains fully visible when the device is folded in half, plus a fingerprint scanner on the edge and at least three cameras.

It’s unclear at this stage how either Huawei or Samsung will be able to take “fastest” bragging rights for a foldable device, but it’s possible Huawei will market a temporary advantage in top 5G speeds. Each company has developed a custom 5G modem and system-on-chip processor, with Huawei likely using its own Balong 5000 series modem and Kirin 980 chipset. The Chinese company has said Balong 5000 will deliver up to 6.5Gbps download speeds on millimeter wave and 4.6Gbps peak downloads on sub-6GHz networks, faster than current-generation Qualcomm Snapdragon X50 modems — but not upcoming X55 versions.

On the other hand, Kirin 980 might not be quite as fast as the Galaxy Fold’s application processor. It’s unclear whether Samsung is using its own chip or Qualcomm’s Snapdragon 855, but it has confirmed a 7-nanometer “64-bit octa-core SoC” for the Fold, likely with the same 1.7GHz to 2.8GHz speed range as the Galaxy S10 5G. Kirin 980 is a 7-nanometer chip with eight cores in the 1.8GHz to 2.6GHz range.

That said, Huawei’s ability to actually deliver Mate X to customers will depend on the states of 5G hardware bans that are currently being contemplated by various countries. Huawei has been blocked from participating in several major 5G network buildouts over security concerns, though it remains to be seen whether the ban keeps its consumer 5G devices off shelves as well. Last year, the U.S. government pushed carriers not to sell Huawei and ZTE 4G handsets, though Huawei has repeatedly denied that they constitute security risks to their customers.

Expect more official details on the Mate X on Sunday, February 24 at Huawei’s event in Barcelona. It will be broadcast live starting at 5 a.m. Pacific time.