Navigating the thoroughfares of New York, London, and Paris is a fairly painless experience in 2019 — just pull out your smartphone, open up Google Maps, and you’re pretty much there already. But what if your destination is somewhere a little more off the beaten track, or if it doesn’t have a reliable or consistent addressing system?

That’s where What3words is setting out to help, with a nifty geocoding system that can convey the exact position of any location on Earth using just three words.

The London-based company, which has raised north of $50 million since its inception in 2013, has divided the planet into 57 trillion 3 meter by 3 meter squares, assigning each square a random three-word address. Through its own-brand mobile app and integrations with a growing number of third-party platforms, travelers the world over can find their way to a random hut in a Mongolian desert, or a beautiful camping spot in a national park. “Hey, you gotta pitch up at wolves.internet.charts, it has the best view of the Lake District,” is the general idea here.

One of the keys to What3words’ success is its third-party integrations, and today at MWC Barcelona (formerly Mobile World Congress), the company announced a major partnership with Ford, which will give millions of drivers across Europe and North America access to What3words’ addressing system through Ford’s Sync3 dashboard infotainment system.

The integration actually works through AppLink, which is Ford’s mechanism for integrating with third-party apps — so to leverage this What3words integration, you will need to use the What3words mobile app in conjunction with Ford’s infotainment platform.

“Ford is providing an important new tool to help get the job done, enabling drivers to navigate to their destinations — wherever they may be — quickly, confidently and accurately,” noted Don Butler, executive director for Ford’s connected vehicle platform and product.

It’s worth noting here that this isn’t designed to give drivers alternate three-word addresses for well-established tourist attractions such as Buckingham Palace — though if, for example, you wanted to meet somebody at a very specific place on the perimeter of the Palace (it is a rather large landmark) then you could use What3words to specify exactly where.

However, that likely won’t be a typical use-case. It’s more about helping people find their way to very specific points of interest such as a hard-to-find sea view, a beer festival in a remote forest, or holiday accommodation in the desert — so travel guide producers, event organizers, or an Airbnb host can tell people where to go using just three words. 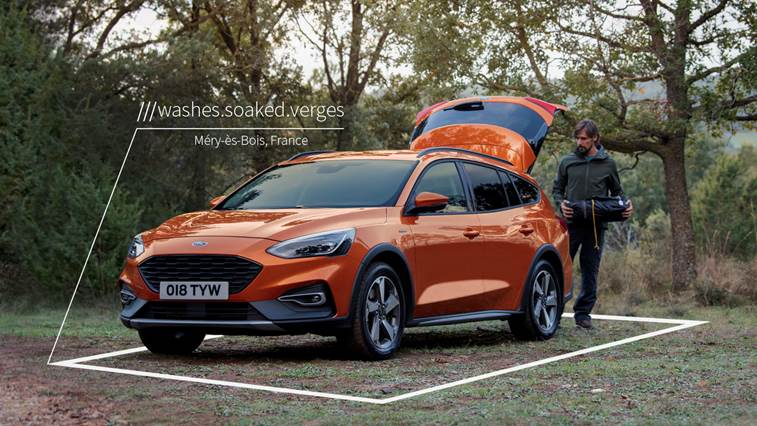 Above: Ford and What3words

What3words has previously licensed its platform to Mongolia’s national postal delivery service in lieu of a reliable local addressing system, while logistics giant Aramex also adopted What3words for its global ecommerce fulfillment operations after investing in the startup as part of its series B round back in 2016.  Elsewhere, German car giant Daimler, which owns Mercedes-Benz, bought a 10 percent stake in What3words last January, shortly after becoming the first automotive firm to integrate What3words directly into the fabric of its vehicles — no need to use the What3words mobile app.

Throw into the mix a slew of additional partnerships, including mapping giant TomTom and travel guide behemoth Lonely Planet, and it’s clear that What3words has been building a solid business. But securing Ford, one of the top car firms in the U.S. and globally, represents a major win for the company as it looks to push its technology in mainstream Western markets.

Digging deeper into the use cases for cars, What3words is stressing the significance of its voice-control smarts. Street addresses aren’t always straightforward — “15” and “50” sound similar, for example, while street names often don’t contain dictionary words that a machine would understand. And some cities can have multiple streets with exactly the same name spread across a large area. For that reason, What3words believes that some drivers may prefer to use What3words to convey a precise location to their car’s navigation system using their voice.

“Our partnership with Ford cuts through common driver frustrations, for the first time, offering precise navigation by voice to accurate addresses,” added What3words CEO Chris Sheldrick. “We are on a mission to help everyone talk about everywhere and we are very excited to be able to bring our technology to the Ford community.”

Above: What3words in use

The basic concept that underpins What3words isn’t new. Similar systems include Mapcode, which was developed by TomTom’s founders in 2001 as a way to describe locations using letters and numbers, while Google has developed a similar Open Location Code (OLC) system. While all these systems do share a common goal, What3words’ use of dictionary words — across 26 languages — may give it an advantage in terms of widespread user adoption.

All that said, What3words has also faced some criticism for adopting a closed, proprietary approach — unlike Mapcode and OLC, which are open source. With patents and copyrights in place, What3words controls a potentially valuable addressing database, and some have argued that this is not a good thing, as it locks people into a closed standards system.

Conversely this is, of course, appealing to investors who prefer to see technology protections in place — that is why the likes of Intel, Daimler, and more recently Sony have invested big bucks in the startup.