Microsoft today revealed its plans for Yammer, the company’s enterprise social network for private communication within organizations. It’s getting the Microsoft Teams treatment — users can now add a Yammer tab to their channels.

Microsoft Teams is used by over 329,000 organizations and is the company’s fastest-growing business app ever. Teams is only two years old — it launched worldwide in March 2017. Microsoft, meanwhile, acquired Yammer for $1.2 billion in June 2012.

Teams is Microsoft’s Office 365 chat-based collaboration tool that competes with Google’s Hangouts Chat, Facebook’s Workplace, and Slack. Microsoft has been slowly consolidating its various enterprise tools into Teams, such as Skype for Business and Skype Room Systems. But Yammer still stands on its own, meaning that Teams can’t completely replace its use cases. So Microsoft has decided to simply integrate the business social network into the communications tool.

Adding Yammer into your Teams channel

By adding a Yammer tab to a Microsoft Teams channel, users can see a group, follow a topic feed, or share conversations in Yammer without having to leave Teams. They can also discuss a Yammer conversation in Teams before posting a reply to the wider Yammer group. 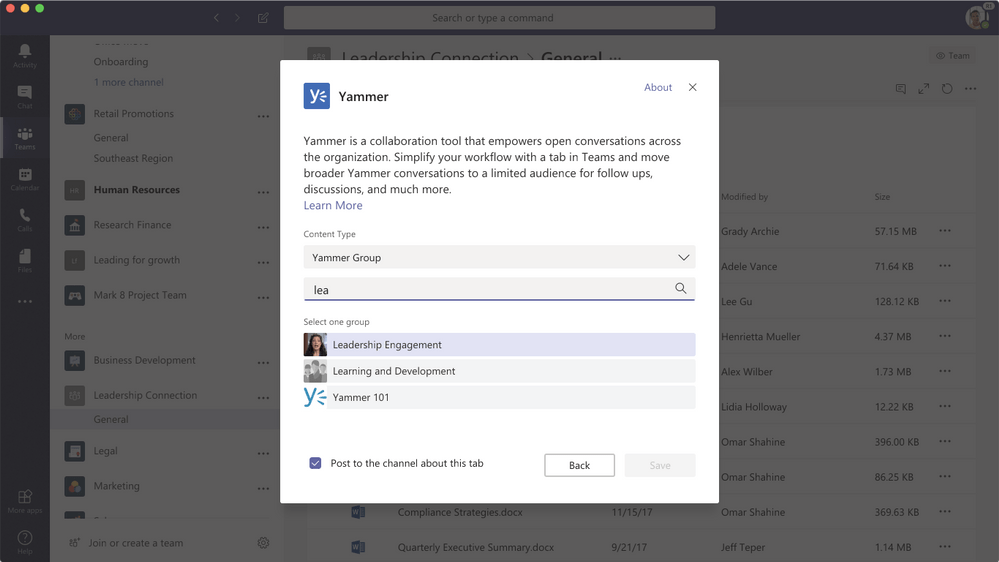 To try out the new integration, follow these seven steps:

The integration is more than just a simple view of the company’s Yammer page. When a Teams member goes to the Yammer tab, they are authenticated by Yammer so that they only see the content that they have access to. That said, Yammer tabs only work on desktop and the web — Microsoft will presumably add support for mobile devices in the future.