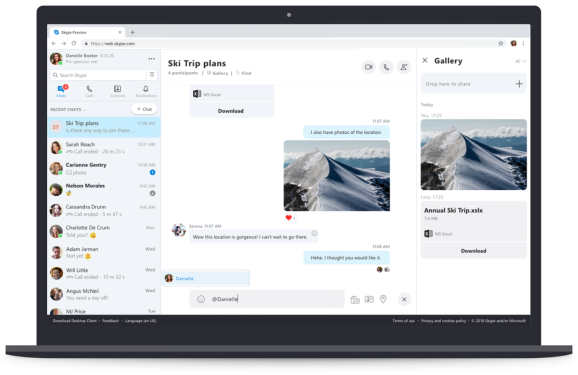 It’s available on any PC running Windows 10 and Mac OS X 10.12 or higher with the latest versions of Google Chrome or Microsoft Edge. The bulk of the new capabilities debuted in preview last October, but they’re available widely starting this week.

In addition to HD video calling, which supports both private and group calls, the latest Skype for Web features built-in call recording. Meanwhile, the aforementioned notifications panel — accessible by clicking on the bell icon — now collates reactions to messages, mentions in group conversations, replies, and more. Search is much improved — typing in a word or phrase bubbles messages in the current conversation up to the top. And the revamped media gallery shows files, links, and photos from a conversation (regardless of timestamp) in a single view.

“We’re always looking for new ways to enhance the experience, improve quality and reliability, and connect people from any device,” Microsoft wrote in a blog post. “Skype has always been about bringing people together. We continue to be driven by the opportunity to connect our global community of hundreds of millions of users, empowering them to feel closer and achieve more together.”

Skype for Web — which launched publicly in April 2016 — signaled a move away for the Skype team from edge clients to a cloud-first, distributed apps model, and coincided with a migration from a peer-to-peer networking backend to a centralized architecture. Case in point: Microsoft in November brought Skype to smart speakers and smart displays powered by Amazon’s Alexa assistant.

Skype, which has an estimated 1.55 billion users worldwide, competes with Facebook Messenger (which had 1.3 billion monthly active users worldwide as of September 2017) and to an extent Tencent’s WeChat (which has more than a billion users). The Skype team’s efforts to stand out from the crowd haven’t been universally well-received — its Snapchat-like ephemeral stories feature and third-party extensions for Gfycat, YouTube, and UpWorthy were widely derided on social media. But others have achieved a measure of success, like the integration of Microsoft’s Cortana intelligent assistant and support for real-time captions and subtitles, along with tools such as the BotBuilder, which allows developers to build interactive video chatbots for Skype conversations.