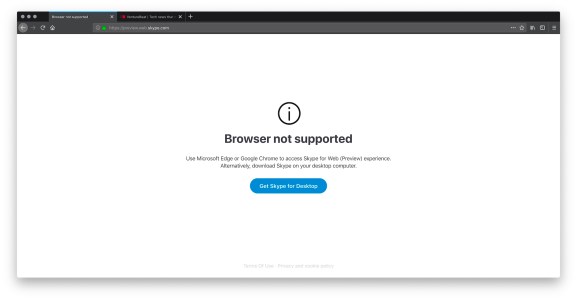 The new Skype for Web client that Microsoft released on Thursday isn’t functional on several browsers, the company confirmed to VentureBeat today. The revamped version of the company’s messaging and video chat client only supports Microsoft Edge and Google Chrome — and Chromium-based browsers such as Vivaldi — but not Apple’s Safari, Mozilla’s Firefox, or Opera.

In a statement to VentureBeat, a Microsoft spokesperson said the service requires “calling and real-time media” technology that is “implemented differently across various browsers.” So the company “decided to prioritize bringing Skype to [the] web on Microsoft Edge and Google Chrome based on customer value.”

The change, though upsetting for many, does not come as a surprise. Last month, Microsoft started warning Firefox, Safari, and Opera users that Skype for Web, first unveiled in 2014, would no longer support their browsers and that they must use Edge or Chrome instead. At the time, a Microsoft spokesperson declined to share when the change would occur.

Microsoft did not specify what underlying technology is preventing Skype for Web from supporting other browsers, but it is likely referring to WebRTC, an open source technology that enables browsers to support real-time communications. Microsoft relies on WebRTC in Skype for desktop. It’s worth noting that Facebook’s Messenger and WhatsApp services do not support voice and video calling in Safari either. Over the years, Microsoft has moved Skype from edge clients to a cloud-first, distributed apps model, and then to a centralized architecture.

Several Safari and Firefox users complained on Friday when they discovered that the latest Skype for Web — which offers new features, including support for high-definition video calls, a revamped notifications panel, and a media library — was not working on their browsers. Some discovered that by changing the user agent in Firefox to mimic Chrome they were able to use the new Skype for Web.

This is a bummer for Skype, which once dominated the video chat market but over the years has lost users to competing services such as Facebook’s WhatsApp and Messenger, Google’s Hangouts, and Tencent’s WeChat. Last year, Skype for Web dropped support for Chrome OS and Linux.

In Microsoft’s statement, the spokesperson added that Skype for Web only supports two operating systems: Windows 10 and Mac OS X 10.12 or higher. Skype’s app continues to support a wider range of operating systems.