Despite lingering fears that “robots” are coming to steal our jobs, automation is infiltrating just about every facet of society, from supermarkets to repetitive software-based jobs and even the creative industries. And one London-based startup wants to capitalize on this growing trend by bringing an affordable desktop-based industrial robot to market.

Founded in 2015 by architects Mostafa ElSayed and Suryansh Chandra, Automata is setting out to help industries automate repetitive physical work, freeing humans to do more fulfilling jobs — more than 90 percent of tasks in manufacturing are still manual, according to Automata.

The company’s first product, a £4,990 ($6,600) robotic arm, dubbed Eva, can be mounted to any flat surface — such as a table or workbench — and configured and controlled via a standard computer browser.

Eva actually soft-launched at the tail end of 2018 when it opened for preorders, but today marks its official launch, and the robotic arm will soon start shipping across Europe and any country that accepts CE certification. The company is also currently looking at certification requirements to enter the U.S. and Asian markets.

Automata also announced today that it has raised $7.4 million in a series A round of funding led by Belgium-based Hummingbird Ventures, with participation from Firstminute Capital, Hardware Club, LocalGlobe, ABB, and Entrepreneur First. The round actually closed last March, but the founders kept it under wraps to avoid some of the skepticism leveled at the robotics industry — in short, they wanted to wait until they had an actual product to show before revealing the funding. 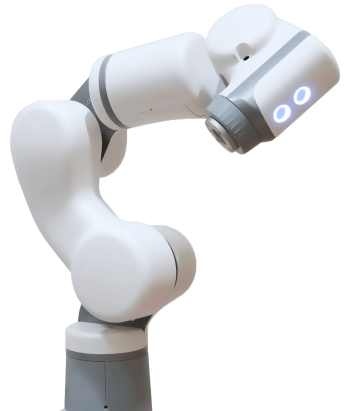 As for real-world use cases, well, according to Automata the main limit is really your imagination. Eva could be paired with a computer vision-powered camera to inspect and test for faulty products or used to pack sandwiches in factories or to test touchscreen phones.

As demonstrated here, three robotic arms and a computer vision camera work in unison to identify the correct letters on wooden blocks, (eventually) putting them in order to spell out the word “Automata.”

In terms of sourcing all the various components for Eva, Automata is working with U.K. robotics manufacturer Tharsus. However, Automata discovered early on that using existing gearbox providers would make the robot too expensive — so it effectively designed and developed its own patented gearbox from scratch to keep costs down.

“We grew a company around a gearbox,” ElSayed explained at a briefing in London earlier today.

Moreover, the company developed its own software system, called Choreograph, which allows companies to configure all the sequences they need their robotic arm to complete. It also integrates with third-party programs across design and 3D printing — this is very much about enabling manufacturers to manage their own small-scale production runs, which may be useful for customizing designs or catering to fluctuating seasonal demands.

Robotics is now a major part of many industries, with the likes of Amazon leaning heavily on automated warehousing systems to cut costs and expedite deliveries. Internally, Amazon uses Kiva Systems, a company it bought for $775 million in 2012. U.K grocery giant Ocado is dabbling in all manner of next-gen systems for picking and packing technology, including robotic arms that can handle delicate items such as fruit and computer vision to determine the best “grasp” for more awkward items.

Not surprisingly, a growing number of startups are building robotics for all manner of use cases, such as delivering food and other goods. However, building physical robots is an expensive endeavor, which is why some companies have been developing novel ways to help smaller companies join the club — Los Angeles-based InVia Robotics, for example, offers a subscription-based warehouse automation platform that negates the need for substantial up-front investments.

Automata’s proposition is different, of course, but built on similar principles: It’s about making robotics more accessible, with a focus on price, user-friendliness, and genuine usefulness.

“Mostafa and I started Automata to democratize robotics and to ultimately allow anyone to seamlessly use a robot,” explained Chandra. “We are extremely proud to offer Eva at the price point we do. People can visit the Automata website and buy a piece of industrial quality equipment on their credit card — it doesn’t get much more accessible than that.”

Prior to its series A round, Automata had raised around $2 million, and with another $7.4 million in the bank it is setting out to grow its existing team of 42, all of whom are based out of the company’s headquarters in London, as well as increasing production of its Eva robots.

“This recent funding allows us to bring Eva to an increased number of businesses across multiple sectors,” Chandra added.