When a vehicle carrying a mother and young child was run off a road in a rural area of South West England, the Avon and Somerset Police department turned to a rather novel means of finding the panic-stricken caller. Rather than dispatching a helicopter or platoon of search vehicles to find the panic-stricken victim — who was unable to describe her exact whereabouts — the call-handler used a quirky geocoding system that can convey the exact position of any location on Earth using just three words.

The system was developed by What3words, which has divided the planet into 57 trillion 3-meter-by-3-meter squares, assigning each square a random three-word address. Though the London-based company has its own consumer mobile app, its main success has come in the form of partnerships and integrations: It licenses its platform to Mongolia’s national postal delivery service in lieu of a reliable local addressing system, and logistics giant Aramex adopted What3words for its global ecommerce fulfillment operations after investing in the startup back in 2016.

Elsewhere, What3words has racked up an impressive roster of partnerships with the likes of TomTom, Daimler, and Ford all embracing the nifty addressing system, which can be used to help convey exact locations that are a little off the beaten track. Want to tell all your buddies about the best place to camp in the Lake District? Why not tell them to head along to wolves.internet.charts.

Today, around 80 percent of calls to emergency telephone numbers come from mobile phones, which is why What3words is stepping up its efforts to help fire and police departments through official software integrations, after a growing number of emergency call-handlers started using What3words to help find callers in despair.

For example, a sexual assault victim who was being held hostage was talked through the What3words process so they could convey their location to the authorities using three words. “The three word address was passed to dispatchers, resulting in the recovery of the victim and capture of the offender,” noted Paul Redshaw, a command center supervisor for Humberside Police in the U.K.

Initially, call-handlers wishing to use What3words would have to guide the caller through the process of using the platform. Getting them to download the What3words app from Google Play or the App Store was not really practical, so instead they would ask them to enter “map.what3words.com” into their mobile browser, and then have them read out the the three words for their location — such as unique.harshest.booth.

But that was still likely too much friction for many emergency scenarios, particularly where someone may be stressed or unable to think clearly. And that is why U.K. authorities requested an update to the Sopra Steria control room software that is used by 60 percent of police forces across the U.K., which makes it easy for call-handlers to send an SMS that contains a link to the What3words browser map site — so it’s just a one-tap process. 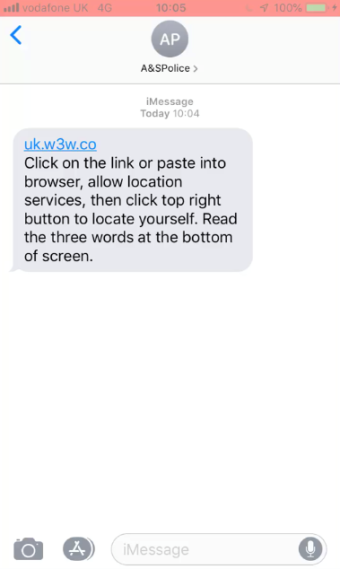 Above: Police can automatically send an SMS to a caller containing a link to the What3words mobile site.

This kind of technology may fundamentally change how the emergency services interact with callers, while reducing the time it takes to identify a location for victims of crimes or accidents.

“Having this type of technology integrated within our command and control system has changed the way we are able to deal with incidents where the location isn’t known,” said Sam Sheppard, command and control systems manager at Avon and Somerset Constabulary. “We are moving away from the old style questioning – ‘Where have you come from?,’ ‘Where are you going?’, ‘What can you see?’, and so on. These questions take time and aren’t always that accurate.”

So how does What3words actually improve on existing location-based technologies available to emergency services?

First up, it is possible to roughly establish the whereabouts of a caller using data gleaned from their nearest mobile phone mast — but that leaves room for a large margin of error, unless the caller happens to be leaning against the mast.

Both Android and iOS have adopted location-based services that combine various signals such as GPS, Wi-Fi, mobile networks, and sensors to transmit precise locations of the user when calling emergency numbers.

Back in 2016, Google announced support for Advanced Mobile Location (AML), which it refers to as the Android Emergency Location Service (ELS), while with iOS 11.3 last year Apple began supporting AML for the iPhone. However, one downside is that for AML to work, it has to be implemented by emergency services and each of the mobile network operators in a country, something that is largely limited to a smattering of nations in Europe at present. This is why both Apple and Google last year expanded their respective location-sharing smarts for emergency services via separate partnerships with technology company RapidSOS, which works to improve the location technologies of emergency centers in the U.S.

What3words also allows multiple emergency responders across various “blue light” services (police, fire, ambulance, etc.) to communicate locations verbally between each other without resorting to complex GPS coordinates. And it’s also worth noting that the What3words platform supports voice commands, so anyone who is driving can verbalize a three-word address into an app to get to the desired location. 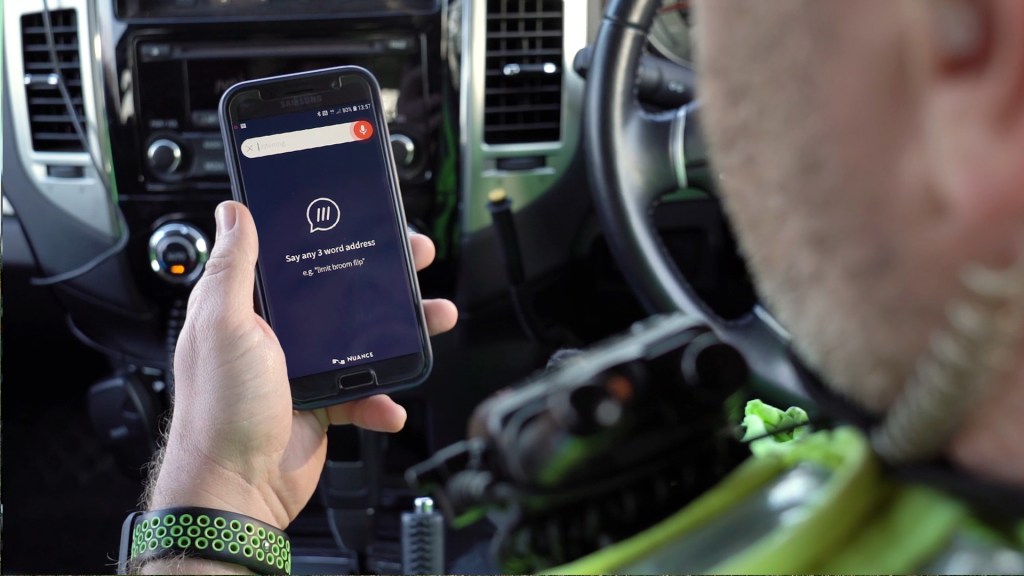 Above: What3words: Emergency services officer in a car

Though its integration with U.K. police and fire services represents a notable expansion for What3words as a critical component of emergency services, it has already been used by emergency services elsewhere. For example, it was used during Hurricane Harvey in 2017 to coordinate some of the relief efforts — a company called DataCapable set up a social media monitoring tool that sourced geolocated tweets and attached three-word addresses to each tweet, making it easier for responders to communicate the location of an individual

Above: DataCapable’s platform sourced geolocated Tweets in the aftermath of Hurricane Harvey

Similarly, What3words has also been used to help with wildfire response efforts in the U.S.via an integration with geospatial technology company Intterra, while in Denver What3words is being used by fire services to communicate the accurate locations of hydrants — it’s much easier to record three-word addresses than long strings of numbers. 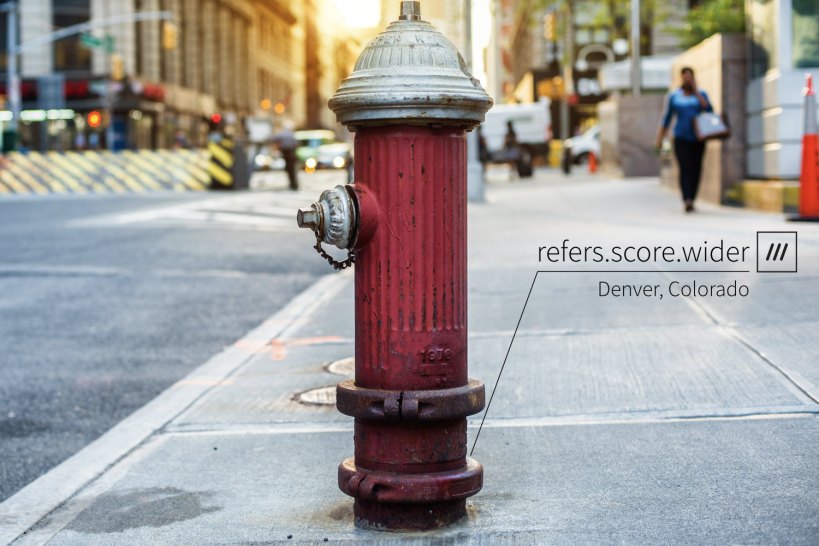 Though much of What3words’ appeal lies in its ability to pinpoint rural locations, in reality it could be used anywhere — it’s often hard to convey a precise location on a long thoroughfare, a spot beside a giant sports stadium, or tent-pitch inside a huge music festival.

“Being in need of urgent help and not being able to easily describe where you are can be very distressing for the person involved and a really difficult situation for emergency services,” said Chris Sheldrick, What3words cofounder and CEO. “Today people nearly always have their phone on them. We need to use the tools at our disposal to improve public services and potentially save lives.”