Mozilla has finally released its encrypted file-transfer app for Android, nearly two weeks after officially releasing it for the desktop. The company did announce at the time that it was launching the app as part of a public beta for Android, though that was ultimately delayed for undisclosed reasons.

At any rate, Firefox Send is available on Android phones now, and from a feature perspective it’s pretty much on a par with the desktop incarnation.

Without having to sign in or create a Firefox account, you can use the Firefox Send app to upload file(s) of up to 1GB and share a link with other users. You can include any files that are stored on your phone, including photos, videos, and PDFs, and it also gives you access to any files stored in your cloud accounts, like Dropbox or Google Drive, assuming they’re synced to the device. 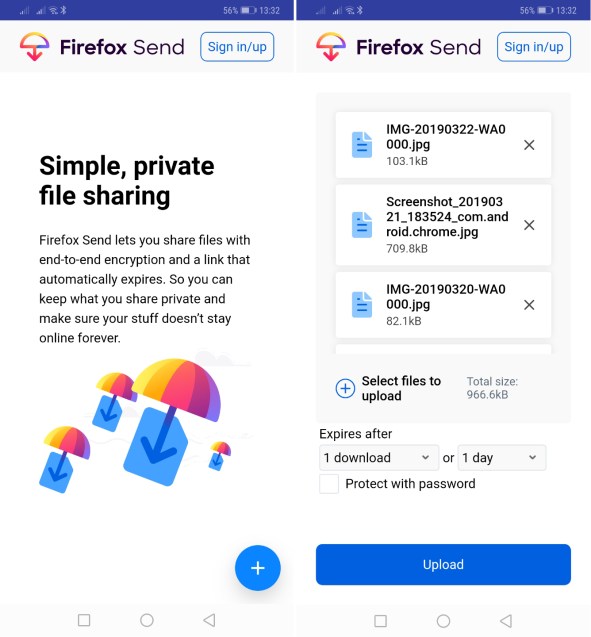 Above: Firefox Send for Android: Getting started 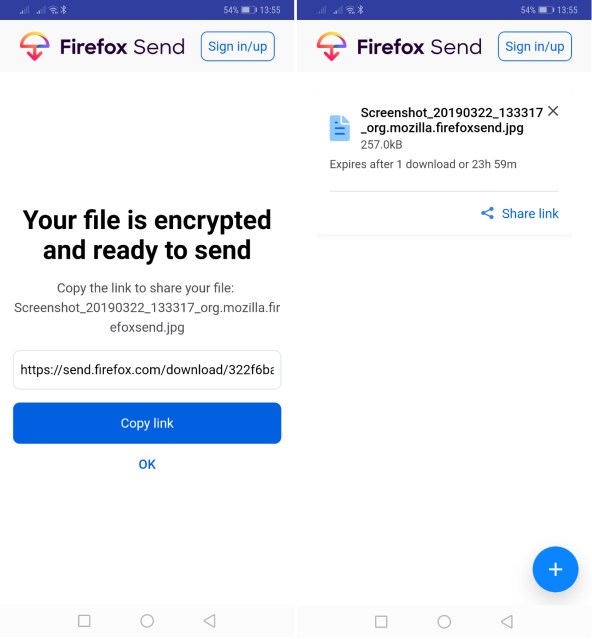 Above: Firefox Send: Sharing a link

So far so good. But those who haven’t signed into their Firefox accounts will encounter some limitations. For example, they will only be allowed to action a single download from a shared link before it expires, and they will also be limited to a timescale of no more than a day. 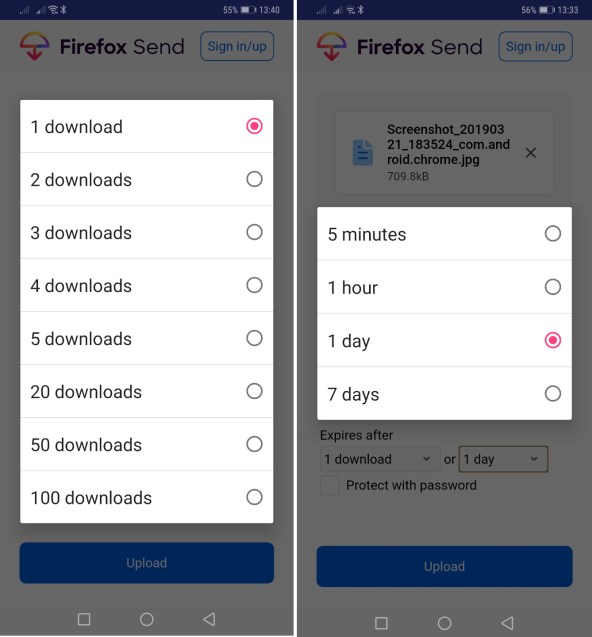 If you try to select more than one download or one day from the little drop-down boxes, you’ll be prompted to create a Firefox account or to sign in if you already have one. Doing so also gives you access to a higher file size limit of 2GB.

As a simple app for sharing files on the fly, Firefox Send works, and it works well.

For comparison, WeTransfer — a more established player in the file transfer realm — doesn’t require you to sign in to use its free service, and it allows you to share files of up to 2GB in size. But all files are stored for 7 days standard, and you can’t control the number of downloads that are allowed. It’s also worth mentioning that this service is ad-supported. On WeTransfer’s paid service, which costs $10 per month and has no ads, users can set the default expiry period to one week, two weeks, four weeks, or never, but they still can’t set limits on the number of downloads.

WeTransfer’s paid service comes with a bunch of other benefits, such as the ability to send up to 20GB with each transfer, and also allows up to 500GB of storage.

There are, of course, countless services for sharing files with friends and colleagues, such as Dropbox and Google Drive. But with granular controls and end-to-end encryption, Mozilla is pitching Firefox Send as an ephemeral, privacy-focused alternative. You don’t have to remember to delete a file, and if you’re super paranoid you can set the auto-remove timer to as little as five minutes.

The logged-out version of Firefox Send will suffice for many individuals, including freelancers and creatives, but those with more industrial-sized needs will probably want to get a Firefox account. Anyone looking for heftier file transfers, and maybe a little cloud storage thrown in for good measure, will probably do well to explore a paid service, such as the one WeTransfer offers.