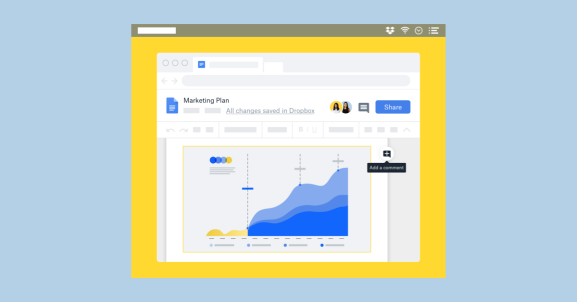 Commenting on Google Doc inside Dropbox

More than a year after announcing a series of cross-platform integrations, Google and Dropbox have finally given a first glimpse of what a deep partnership between the two platforms will look like.

The duo first announced the collaboration last March, so this has been a long time coming. In the intervening months, other facets of the partnership have borne fruit, including a Dropbox add-on for Gmail and a Google Cloud Identity plugin that allows Dropbox admins to leverage Google login credentials for business accounts. But the biggest part of the tie-up is undoubtedly the open beta launch today that will bring G Suite content into Dropbox, allowing users to create, edit, save, and share Google-format documents, spreadsheets, and presentations directly from within Dropbox.

This move follows a similar integration with Dropbox rival Box, which introduced a public beta of Box for G Suite back in August, before rolling it out more widely in December.

Such partnerships seem counterintuitive on the surface — after all, G Suite already comes with its very own cloud-storage service in the form of Google Drive. But the bottom line is, many companies subscribe to G Suite for organizational, communication, and collaboration apps such as Docs, Calendar, and Gmail, and prefer to use other cloud storage services. Indeed, it’s not unusual for organizations to subscribe to multiple services for different apps, so by joining up in this way, Google and Dropbox can keep their respective customers happy.

In an interview with VentureBeat last year, Billy Blau, Dropbox’s head of technology partnerships, said that more than 50 percent of Dropbox Business subscribers also use G Suite. “It really comes from the fact that we have a big overlap of customer bases,” he said. “We have hundreds of millions of users who have Gmail addresses and are also G Suite users.”

To leverage the Google / Dropbox integration, you first need to opt in and connect your Google and Dropbox accounts. (It’s worth noting here this integration will only work with a Dropbox Business subscription.)

Once in, you can work with G Suite content in pretty much exactly the same way as you would inside Google Drive — files can be created from scratch from the Windows system tray, Mac menu bar, or through Dropbox.com, while users across all Dropbox platforms (desktop, web, and mobile) will be able to search, view, comment, move, copy, and delete files. On mobile, users will not be able to edit files.

Above: Creating a file from scratch inside Dropbox

Documents can be made entirely collaborative inside Dropbox too, with the ability to invite users to edit and comment. Files can be added to a shared Dropbox folder for anyone to access, though they can also be shared on a one-off basis with a specific individual, without adding them to a shared folder.

Above: Commenting on a Google Doc file inside Dropbox

It’s also worth highlighting some potentially interesting use cases that are possible due to another update Dropbox rolled out a couple of weeks back. The company introduced a new search feature into its desktop apps, allowing users to search for documents by clicking the system tray in Windows or or menu bar on a Mac. This makes it possible to search through everything attached to a Dropbox account, even if it’s not synchronized to the desktop, while it also enables users to search by text contained inside documents — not just in the filename.

Thus with G Suite integration, Dropbox users can now search through all their Docs, Sheets, and Slides files from the search field in the desktop app, and also use keywords contained inside the files to help them find specific documents.

This is a genuinely useful integration that will likely prove popular with millions of enterprise customers for both companies. And they can opt in to the open beta program starting from today.