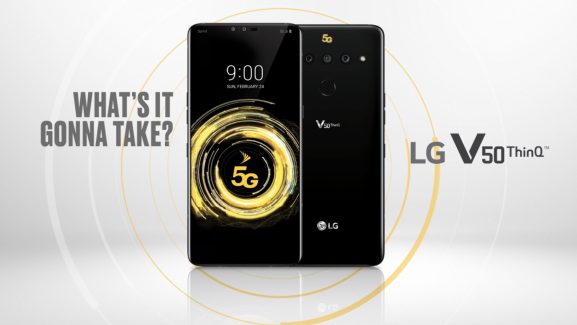 LG’s upcoming V50 ThinQ 5G is about to hit stores as a more affordable alternative to Samsung’s Galaxy S10 5G, but it will have more than just aggressive pricing on its side. According to the Korea Herald, the company said today that the V50 will include new, personally tailored AI services that rely on the phone’s own data rather than cloud processing.

Although the V50 is an Android phone, the new AI feature hews closer to the “proactive assistance” offered by Apple’s Siri than the “harvest everything, sort in the cloud” approach of Google Assistant. LG is touting the new on-device AI as being faster, more accurate, and more secure compared with cloud-based assistance, all benefits of the AI-optimized Qualcomm Snapdragon 855 chip found inside.

Like Siri’s proactive features, the V50’s AI functionality will be limited to narrow but potentially useful capabilities. Location-related services will be among them: When the user rides the subway, the phone will offer an alarm to flag arrival at a destination stop; similarly, if a user parks and exits a car, the phone will offer a reminder to photograph the location.

A separate report from ZDnet suggests that the V50’s AI will be able to call the user’s attention to expiring coupons, and make search-specific recommendations utilizing location data and past phone calls or text messages. Collectively, these features highlight the ability of modern AI processors to perform useful background tasks — aggregating and sifting through various types of on-device information — rather than sharing all your personal data with Google or another cloud-based provider.

The V50 ThinQ 5G has already been announced for Sprint’s 5G network in the United States, which has yet to go live but will rely on 2.5GHz radio frequencies for mid-speed 5G coverage. LG is launching the phone on April 19 in South Korea for the equivalent of $1,050.