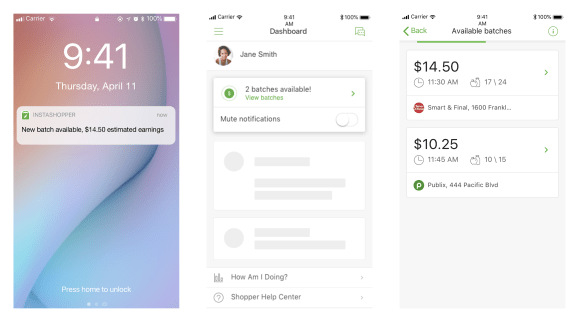 Historically, shoppers for on-demand grocery delivery startup Instacart haven’t had the easiest go of it. They’ve been forced to sign up for work in advance, which necessarily weeded out gig employees with unpredictable daytime schedules. Fortunately, in response to feedback, Instacart is rolling out a new option — On-Demand shopping — that aims to make shopping more accessible by allowing users to fulfill orders whenever they please.

“As more busy people and families across North America rely on online grocery shopping and delivery, we’ve learned that different markets may need different product features to meet demand and make work more flexible for shoppers,” wrote Instacart chief product officer David Hahn in a blog post. “Our goal is to always build a product that empowers shoppers and makes shopping more convenient — offering a simple and straightforward solution that benefits everyone.”

Toward that end, On-Demand shopping — which launches today in Boston, Rochester, and Austin, following a pilot involving nearly 7,000 shoppers in Sacramento, Buffalo, and other select regions — allows shoppers to review and accept batches from the main dashboard of Instacart’s Shopper App. The batches update in real time as new orders are placed and other shoppers pick them up, and appear alongside scheduled batches depending on the shopping zone.

Instacart says that compensation for On-Demand shopping is the same as that of scheduled batches, and says that it’ll roll out On-Demand in additional markets later this year.

“As On-Demand [shopping] becomes available in more regions, we’ll be connecting with the community to listen, support, and continue building the best possible product experience for shoppers,” Hahn said. “We’re grateful for your continued dedication and we’re committed to building meaningful products that help you succeed.”

Today’s launch comes over a month after Instacart made another change aimed at helping shoppers make ends meet: a revamped payment structure. Following reports detailing how Instacart used tips to cover base wages rather than revenue, the company said it would separate tips from compensation and give back pay dating to late last year, as well as raise minimum batch payments from $3 to $5 for delivery-only jobs and from $7 to $10 for jobs involving shopping and packing. (Instacart guarantees its workers at least $10 per job.)

Instacart’s been aggressively ramping up service to compete with same-day delivery startups like DoorDash, which raised around $800 million in funding last year, and Deliv, which attracted a $40 million investment in October from Google. In November, it launched a new pickup grocery option — Instacart Pickup — with retail partners including Wegmans, Cub Foods, Aldi, Food Lion, Publix, and Sprouts in 25 regions around Atlanta, Boston, Charlotte, Minneapolis, Nashville, San Francisco, and Washington, D.C. It recently expanded to Canada, where it says it now serves 60% of Canadian households, and earlier this year, it extended alcohol delivery to 14 states across 100 different retailers.

In the roughly seven years since its founding, Instacart has raised around $1.6 billion in funding, including $200 million and a follow-on $600 million in 2018. Instacart says that it now reaches nearly 20,000 stores across more than 5,500 cities in North America, and that its service is accessible to more than 80% of all households in the U.S. (up from 35% in 2017) across all 50 states.