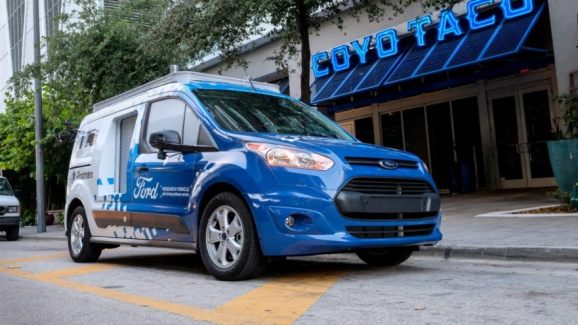 Ford intends to deploy upwards of 100 driverless vehicles by the end of 2019 and begin testing in a new city as it ramps up development of its autonomous technologies, CEO Jim Hackett told investors during the company’s Q1 2019 earnings call on Thursday.

Hackett said that Ford is focusing on “more complex” environments with seasonal weather changes and “intense” metro challenges, rather than suburban areas where the roads don’t change that often, or freeways. “We laughed that if autonomy was only destined for the L.A. freeways, you don’t have to deal with dogs and baseballs running across them, and no need to recognize that,” said Hackett. He added, “We’ve opted into some really difficult settings to prove this capability.”

Earlier this month, Hackett — who formerly led Ford’s autonomous vehicle division — admitted during a speech at the Detroit Economic Club that the carmaker had been overly ambitious in its plans to rapidly scale its self-driving efforts. He reiterated that Ford is on track to launch a driverless car fleet in 2021 but said that it’ll likely be geofenced and that the applications “will be narrow” because the problem of self-driving “is still too complex.”

Ford has a close relationship with Pittsburgh-based driverless technologies startup Argo AI, which it pledged to invest $1 million in over the next five years. Argo is currently testing autonomous cars in Miami and Detroit, with plans to expand tests to Washington, D.C. in the coming months, and it has obtained a permit to drive its self-driving cars on California roads.

Argo’s system — which comprises sensors like cameras, radar, and lidar, in addition to software and a bespoke compute platform — is one of its two core projects; the other is creating and maintaining high-definition maps of the roads on which its cars will drive.

In November, Ford unveiled a collaboration with Postmates to deliver food, personal care items, and other everyday goods from Walmart stores in Miami-Dade County. This came months after the company launched a delivery program — albeit a non-autonomous one — with Postmates in Miami and Miami Beach, Florida. The latter pilot lets customers order goods from local businesses. Orders are delivered via Ford Transit Connect cars sporting multiple storage lockers, speakers, and touchscreens.

As part of a $900 million investment in its Michigan manufacturing footprint announced two years ago, the automaker said in March that it would build a new factory dedicated to the production of autonomous vehicles. In July, Ford revealed that it would create a separate $4 billion Detroit-based unit to house the research, engineering, systems integration, business strategy, and development operations for its self-driving vehicle fleet. Separately, it has entered “exploratory talks” with Volkswagen to co-develop autonomous and electric cars.