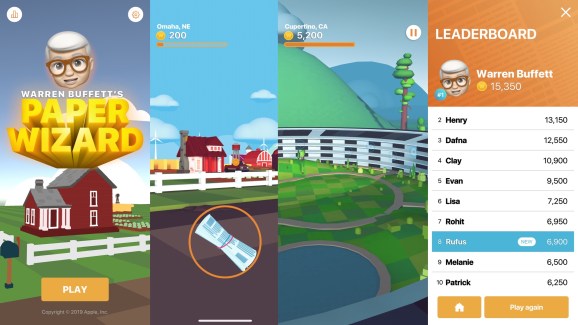 In what might well be the year’s most unlikely release from Apple, the company has published something new on the App Store — Warren Buffett’s Paper Wizard (via MacRumors) — as its first iPhone game in roughly a decade. The free app appears to be a tribute to one of Apple’s largest shareholders, nicknamed “the oracle of Omaha,” who currently holds between $40 billion and $50 billion of the technology company’s stock.

As a 3D clone of Atari’s classic 1985 arcade game Paperboy, Paper Wizard lets players test their “paper-flinging skills as you make your way from the streets of Omaha, Nebraska, all the way to Cupertino, California,” using swipe controls to direct newspapers at houses and buildings. You get points for each newspaper that lands properly at a highlighted target, and lose points for hitting birds or cars between your vantage point and the buildings.

While the app is listed with “Wildlife Design Inc.” as its seller name, it has an Apple copyright and plenty of references to its corporate parent. Each of the two “worlds” consists of cartoony residential and commercial areas vaguely modeled on the actual cities, ending with a scene where you can toss newspapers at targets at Apple’s new Apple Park campus from its inner courtyard. The game is Apple’s first since 2008, when it released an iPhone version of Texas Hold’em as a port from the iPod; the game was unceremoniously discontinued three years later.

It’s unclear why Apple released the title, beyond perhaps to draw a little attention to its app development efforts or its appreciation for Buffett when his investment company, Berkshire Hathaway, held its annual meeting. Buffett is listed at the top of the app’s leaderboard with a score of 15,350 “Warren Bucks,” and the app’s page asks, “Will anyone collect enough Warren Bucks to dethrone the Paper Wizard? Probably not.” He has been vocal in his support of Apple, and Apple CEO Tim Cook has repeatedly expressed his gratitude for Buffett’s backing, which has historically been reserved for companies with long-term stability and growth.

Warren Buffett’s Paper Wizard is available now as a free download from the iOS App Store. It’s solely designed for iPhones, upscaling when run on iPads.