I’m not a car reviewer, but I’ve been trying out new cars ever since I came back from the CES 2019 tech trade show in January. I saw so many high-end cars at that show, packed with high-tech gadgetry, and I wanted to try them out.

That was how I was able to get my hands on an Audi A8 L sedan for about a week. It was by far the nicest car I’ve ever driven (with prices starting at $83,000 and more like $101,000 for the model that I tried out). And it used a lot of technology for entertainment, safety, interior design, and driver assistance.

It’s not a Tesla, for sure, as it is gas powered. But it’s the kind of car that a Silicon Valley geek can get excited about. 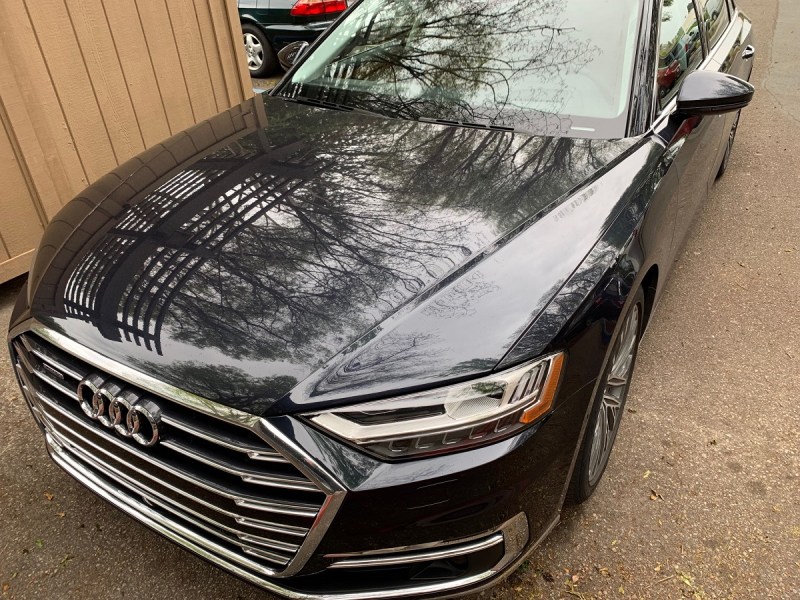 The piano black exterior of the car gave it a classy look. And the internal design had valetta leather seats that were very comfy. Brushed aluminum surrounds the displays on the dashboard. When you get in the car, the audio tweeters emerge and the air vents open, as if it is a special occasion.

The seats are heated, and you have the option of adding massage capabilities to the chairs. You can adjust them in 18 directions to give yourself proper lumbar support. It has options for ionized air. You can buy options for heated arm rests or a heated steering wheel. I thought that was pretty cool, particularly on cooler days.

The dashboard has an Audi virtual cockpit featuring a 12.3-inch color display that refreshes at 60 frames per second. It uses a Tegra K1 chip from Nvidia to display HD visuals. 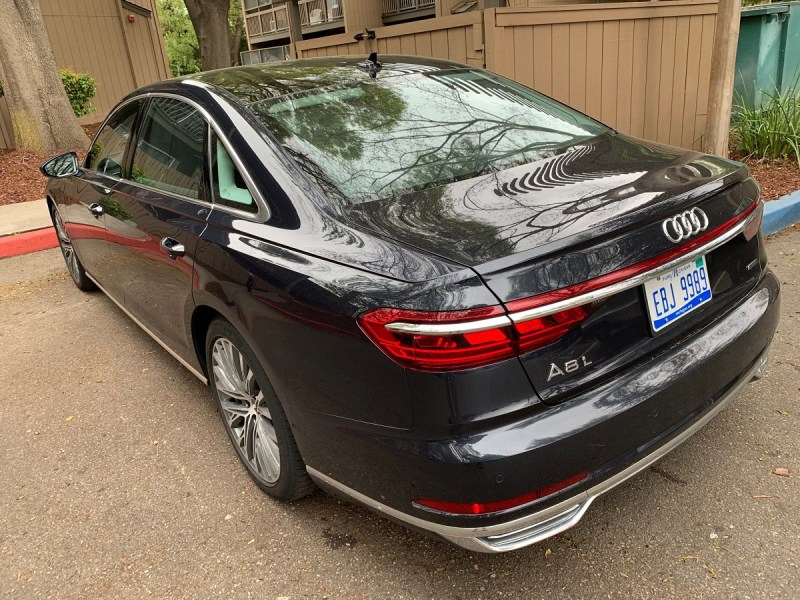 Above: Audi A8 L Quattro is a pretty smooth ride.

It has an option for a Bang & Olufsen Advanced Sound System with 3D surround sound. The car has 23 speakers. The 3.0-liter engine is a V6 with 335 horsepower and 369 pound-feet of torque. For me, the car seemed very powerful when getting on the freeway and passing up other cars.

The car weighs 4,700 pounds. The trunk has hands-free opening and closing, and it has a two-panel sunroof. The car has a lot of headroom and room for passengers’ feet in the back seat. The trunk isn’t huge, and it’s a bit tough to get three people in the back seat.

The driver’s console has two touchscreens, with a 10.-inch screen on the top and an 8.6-inch screen on the bottom. You can store up to 32 shortcuts on the lower screen. And the car can remember up to seven profiles for different drivers and their preferences. Previous models had control knobs.

Audi got rid of a multitude of individual buttons in favor of consolidating them into the dual-screen MMI touch response using the same intuitive operations as the latest smartphone interfaces. The black glass touchscreens have haptic feedback, which means you can feel force feedback on your finger as you touch the display. You get different feedback if you use a slider to lower the temperature, or a button to initiate an app. 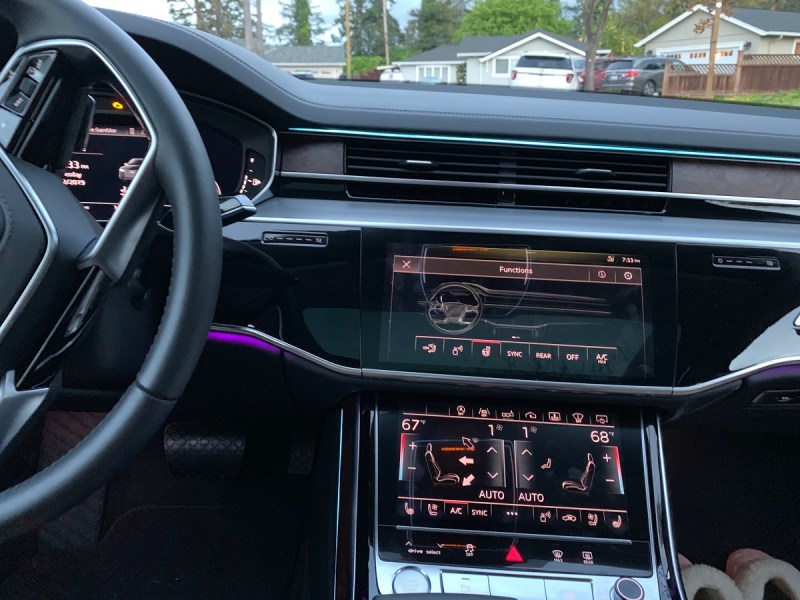 Above: Check out those big screens in the Audi A8 L Quattro.

You can also use your finger to write out your destination on the touchscreen, and the screen will recognize your handwriting. I only had a chance to test how accurate it was a couple of times.

The car has Apple Car Play integration, which is a standard feature on many of the 2019 models I’ve driven this year. That means that you can link your iPhone to the car’s Wi-Fi network, which can be used as a hot spot. Then you can activate Car Play and see what is on your iPhone on the car’s upper infotainment display. The car also works with Google Android Auto, and it has options for Sirius XM satellite radio.

When I powered up Waze on my iPhone, the directions showed up on the car display. And I was able to use the touch icons on the screen to control maps, messages, and music. You can use voice commands with the system interface to activate various things on the screen or switch to the music screen.

If you get disoriented, you can press the Home button. You can organize the icons as you like and save channels as your favorites. In navigation, you can save your home address or work address as favorites. And you can save all of these favorites in your driver profile.

The HERE-powered navigation system can remember your routes over time. You can also use the MyAudi app for a greater range of smartphone-controlled vehicle selections.

The windshield has a heads-up display that shows your speed on a small part of the windshield. Only the driver can see it.

The Audi also includes predictive active suspension. That means the car can detect if you are about to get T-boned. As a defensive measure, it will tilt up that side of the car as much as three inches in a half second. That presents the stronger parts of the frame to the main part of the collision, helping to reduce the risk of injury.

For the first time, the car has a laser scanner and other sensors and cameras. The scanner provides more detailed, contoured images that measure distance and orientation. It also has a long-range radar and a front-facing camera. The zFAS central driver assistance computer processes all of the sensor information. The sensors help the computer form a picture of the vehicle’s surroundings.

The car has a forward-facing camera that scans the roadway to help anticipate irregularities in the surface and make adjustments for optimal ride quality.

While the driver maintains control, the intelligent systems in the A8 simultaneously assess the vehicle’s surroundings. 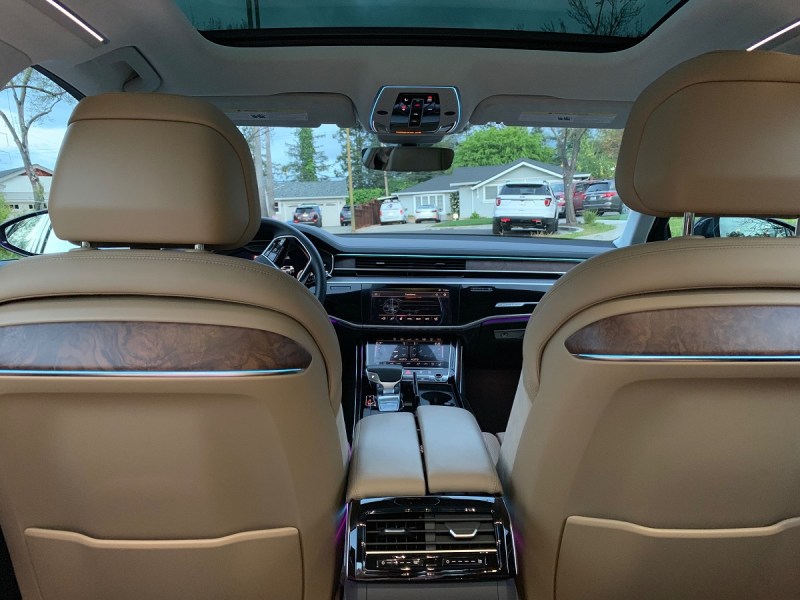 Above: The interior of the Audi A8 L Quattro. Your kids cannot control your voice recognition.

The safety-enhancing systems include improved lane centering and more precise lane tracking. That means if you get drowsy and drift out of your lane, the car will alert you with both visual aids and sounds. But it leaves control of the car in your hands.

In the optional driver assistance package, the car has an Adaptive Cruise Assist (ACA) function, which is a “hands-on” system that assists the driver with acceleration, braking and steering at low speed and in traffic jam situations. It has improved navigation of tight lane situations such as construction zones, and it supports highway speeds.

The car also has intersection assist to support the driver avoid low-speed collisions with cross traffic in front of the car when entering an intersection or when leaving a parking space with an obstructed view. The system warns the driver visually of approaching traffic and audibly as well as initiating braking when needed. 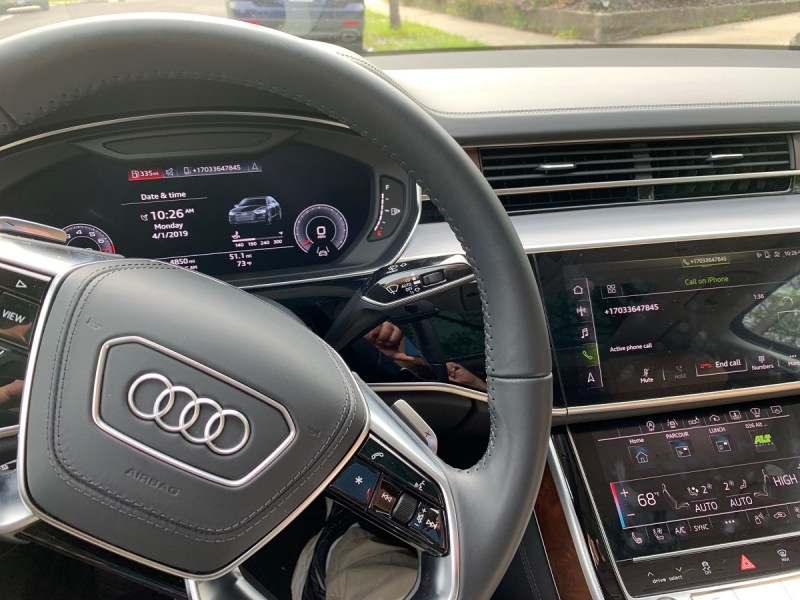 Above: The Audi A8 L Quattro will warn you with a red light if you have to slam on the brakes.

The Audi pre sense 360 technology detects potential collision hazards all around the car and initiates specific preventative measures. Those can include adding more pressure to the brakes when you step on them. It can also flash a red light in front of you on the main dashboard. It can also precondition seat belt tensioners, raise windows, close the sunroof and prepare airbags for deployment in case of a pending collision from any direction.

The emergency assist detects if the driver is unresponsive and brings the car to a stop in its lane, engages emergency hazard lights and places an emergency SOS call. That’s an exception to the notion that you are always in control of the car.

The 360-degree cameras simplify parking and maneuvering by providing a virtual 3D image of the vehicle’s surroundings (in the infotainment display), allowing the driver to spin and zoom the image for optimal view.

The mirrors on either side can flash an orange light if a car is in your blind spot or coming up fast behind you. That’s helpful if you are thinking of changing lanes.

The car also has exit assist, which delays the opening of a door through the electronic latch system if a vehicle or bike rider is approaching as you look to open door.

Cool lighting and other gizmos 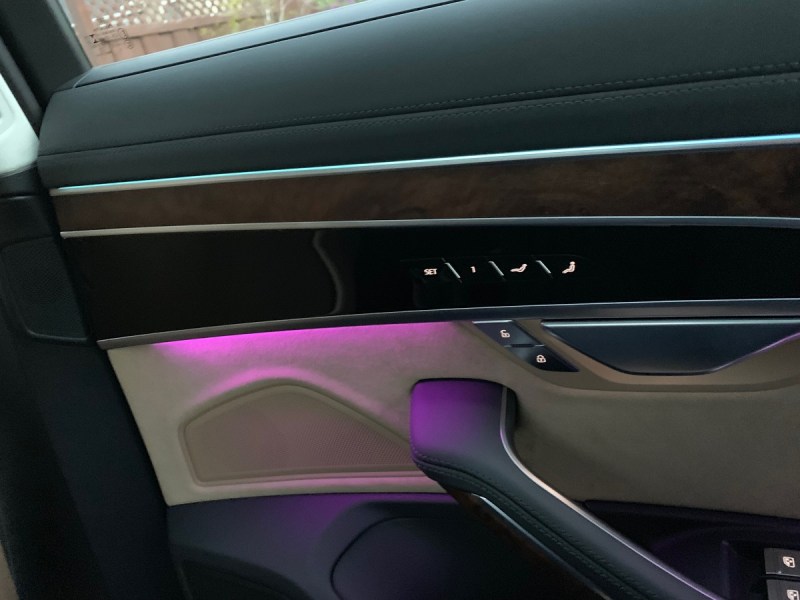 Above: You can change the LED lights in the interior of the Audi A8 L Quattro.

You can control the inside “Matrix” lighting from either the dashboard in the front seat or in the rear. You just tap on a couple of buttons and open a screen with a slider on it. You can slide the marker to a certain color, and the LED lighting on the cabin’s highlights will change to that color. You can control a spotlight that shines down on a given spot so you can read in the dark. That makes you feel like you’re sitting in a theater.

The backseat has a center console with a smartphone-sized OLED screen. You can use that to customize the lighting, seating, reading lamps, and infotainment options. You can also use it to give yourself a massage in a heated chair. The right rear passenger seat has an optional heated massage for the footrest. 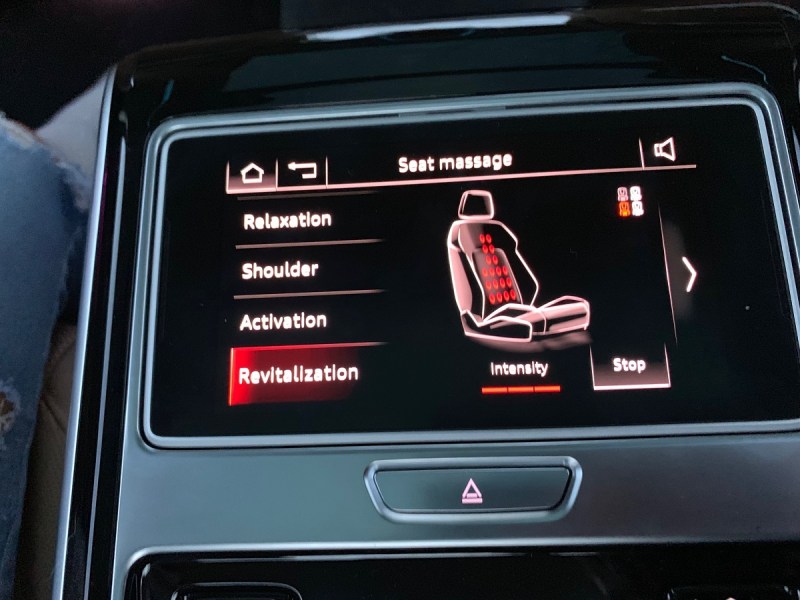 Above: You can turn on the massage for your car seats in the Audi A8 L Quattro.

If you want dual-pane acoustic glass, you can pay for that. Also optional is a smartphone wireless charging system with an antenna booster in the center console. It has another option for a dual-tablet entertainment system with DVD changer in the back seat. You can pop out the tablet and hold it in your hand.

Like I said. This was the nicest car I’ve ever driven. It has plenty of safety systems to keep me focused on the task of driving, but it also keeps the ride from getting too boring like giving me access to my iPhone’s apps, like Spotify. I can use Waze to get around the tough traffic and it is very entertaining and relaxing for the passengers.

This kind of car is a pleasure to drive. And so it is with a bit of sadness that I think about the self-driving car of the future, which takes that pleasure of driving away. The tech is quite wonderful in this car, but you pay a high price for that. Still, none of the tech feels gratuitous, as it is either geared toward driver enjoyment or safety.