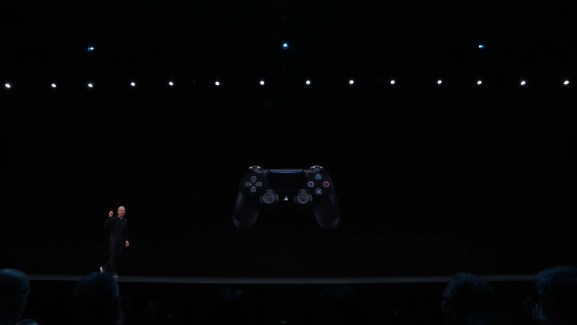 At Apple’s 2019 WorldWide Developer Conference in San Jose, California, the Cupertino company announced a slew of upgrades heading to tvOS, the operating system that runs atop the Apple TV.

First up is multiuser support. In the latest version of tvOS (tvOS 13), every family member and friend gets their own Up Next list, plus personalized recommendations for new shows and movies. A redesigned Control Center, launched with a swipe to the on the remote, handles user-switching duties.

Also on tap is a refreshed Apple Music and gaming experience. Soon, you’ll be able to see lyrics in sync with playing music and see songs tailored to your individual tastes and preferences, and on the Apple TV 4K, you’ll be able to play select games with Xbox One and PlayStation DualShock controllers.

“That’s the new tvOS: it’s more personal and more entertaining than ever,” said CEO Tim Cook. “We completely redesigned the home screen, making Apple TV come to life from the moment that you turn it on, with full-screen previews of the best TV shows and newly released movies.”

Earlier this year, Samsung 2019 smart TVs and select models got an updated Apple TV app, which Macs will be able to run in the fall. And in March at Apple’s It’s Show Time event, the company took the wraps off of Apple TV Channels and Apple TV+, a premium content subscription service.

Apple has invested upwards of $1 billion in developing TV shows and movies for Apple TV+, notably including partnerships, and in total, has over 25 different programs in development, largely in the form of episodic television shows. Apple today previewed a new series from Star Trek and Battlestar Galactica producer Ron Moore, and on the movie side, Apple acquired a Sofia Coppola-directed film called On the Rocks starring her Lost in Translation collaborator Bill Murray, and Hala, a film about a Muslim teenager from writer/director Minhal Baig.

Besides adding Channels, Apple also recently updated its TV apps for both iOS 12.3 and tvOS 12.3 to more tightly integrate with the iTunes Store, allowing direct purchases and rentals of movies and TV shows without exiting the TV app itself. The app now separately breaks out movies, TV shows, sports, and kids’ content at the top of the screen, while providing access to Watch Now recommendations and your existing iTunes library either at the bottom (iOS) or top (tvOS) of the screen. Apple says that its TV app now integrates content from over 150 video apps, including individual channels from across the world.

At last year’s Worldwide Developers Conference (WWDC), Apple announced version 12 of tvOS, the entertainment-centric operating system for the company’s lineup of Apple TV set-top boxes. One of the highlights was support for Dolby Atmos, a premium audio format for multichannel surround sound setups, and another was “zero sign-on,” which automatically detects a TV provider’s broadband network and signs you into apps.