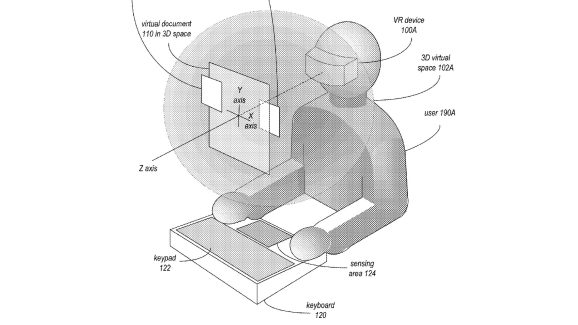 Apple’s on-stage revelations of new augmented reality initiatives have largely focused on ARKit software, but the company has also been working on mixed reality hardware, as patents and reliable reports have amply established. While some of the patent documents are just nuts-and-bolts pieces, others have been eye-catching and unusual, including a newly filed application (via Patently Apple) that appears to be targeted at the business world: a plan to let headset wearers see real versions of secret documents and input devices, while outside observers are presented with fakes.

The patent application suggests that a person will sit down with physical typing and trackpad surfaces while looking at a screen. To observers, the screen might show an image of a “dummy document” or screen saver, while the headset wearer will see an augmented image of the actual document in the same place. Similarly, the typing surface could have virtual key labels overlaid to prevent people from knowing what’s actually being typed on either physical or flat touchscreen keys; a touchscreen’s keys could be blacked out to people outside the headset.

Collectively, the screen- and keyboard-obscuring concepts would enable people working in office cubes to view private files despite being right next to fellow employees — the type of secrecy that might be useful at a privacy-obsessive company such as Apple. While not mentioned in the application, confidential documents could be placed in a digital lockbox available only for AR/VR viewing, rather than being circulated in paper or a more widely viewable digital form.

One could picture situations even today where such a system would be useful to a company concerned about employee spying. Earlier this year, the FBI charged Apple employee Jizhong Chen with snapping images of confidential documents from a laptop screen, compromising the secrecy of an Apple autonomous vehicle that has long been under development.

As of March 2019, Apple successfully patented the use of a head-mounted display to virtually augment a physical or touch-based keyboard, and the secret documents portion is an extension to that patent, published for potential opposition today. While the clearest application of the technology would be in the workplace, it could have applications for at-home viewing of private documents as well.