Many years after Apple added both GPS and location services to iPhones, I’m still a little uneasy about having family and friends track my whereabouts, and repulsed that strangers might gain access to my current or historic location data. It’s not that I have anything to hide — my existence is regrettably quite sedentary — but rather the principle that I should be able to move from place to place without fear of being stalked by anyone. I’ll admit that part of my concern comes from Apple having stirred the pot on privacy issues for the last few years; there’s no doubt that numerous companies, including tech giants, are harvesting data for various reasons, innocuous and otherwise.

Apple’s new iOS, iPadOS, and macOS application “Find My” is an effort to thread all of the company’s location-specific privacy considerations through the needle of location tracking. While it gives you the ability to load one app that tracks both Apple devices and Apple device users — plus the potential for tracking rumored standalone Apple Tags — it takes a thoroughly consent-based approach to location services. In a world where tracking so often takes place in the background without your awareness that it’s happening, Find My users may feel that they’re specifically agreeing to and managing the minutiae of … well, almost everything.

Let’s take a look at what Find My brings to the table for iOS 13, iPadOS 13, and macOS Catalina users — and what’s likely to come later this year. 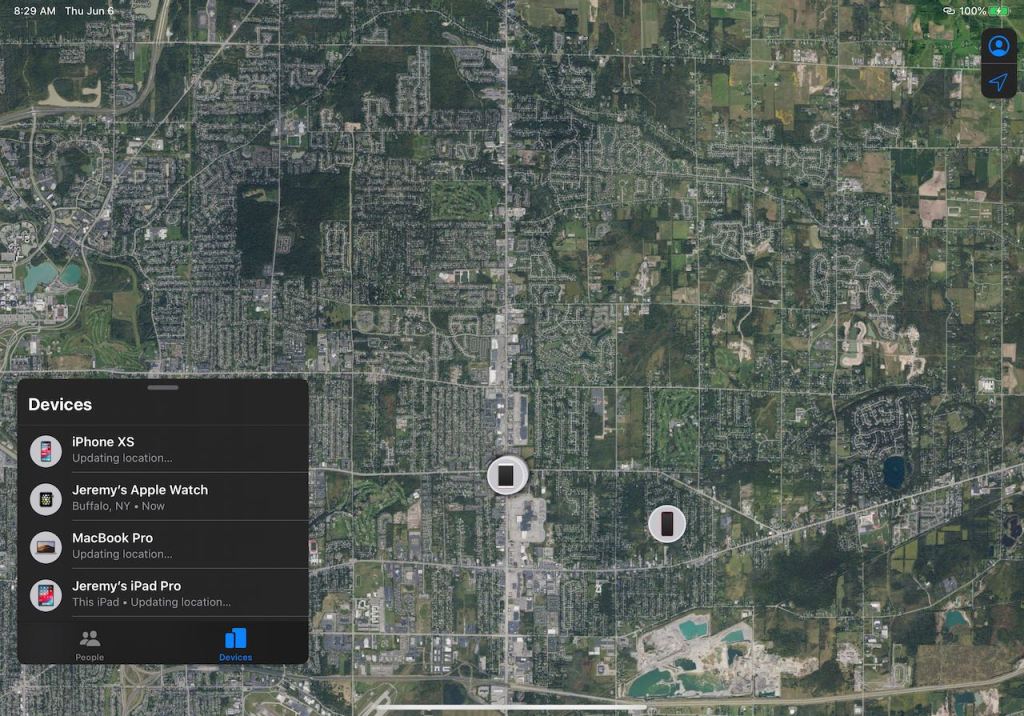 Devices: Find your iPhone, iPad, Mac, or other Apple product

One of the two prior iOS apps Find My subsumes is Find My iPhone, which for years has enabled users to remotely evoke location services on their own devices, pinpointing each on a map. The app’s Devices tab displays a large map scaled to show the varied locations of all devices linked to your iCloud account — including those used by family members — plus an expandable list that lets you drill down into the details for any specific device. 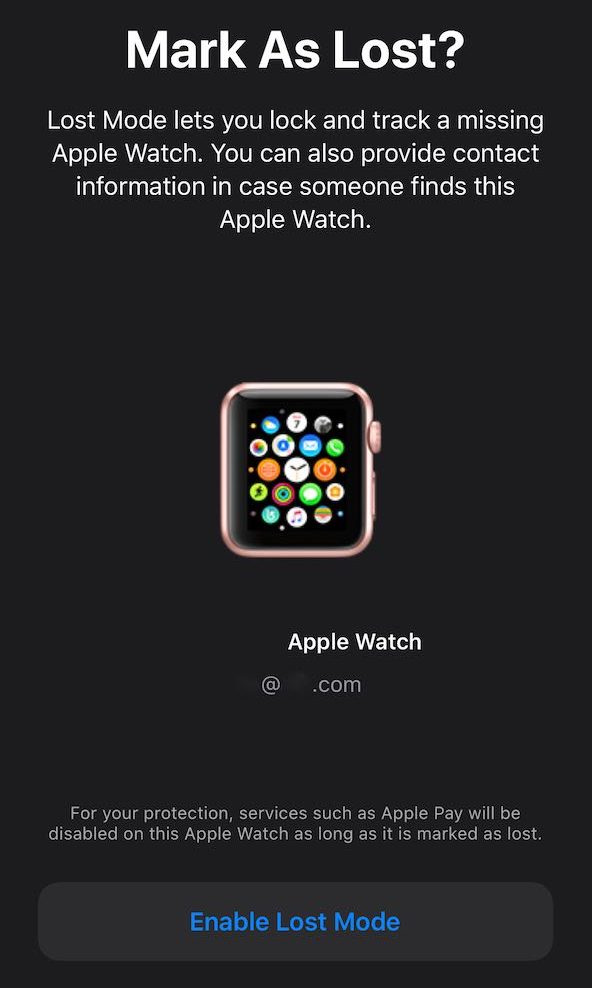 An Apple Watch, for instance, will be listed at a specific address with its current battery level — assuming it has recently connected via iPhone or its own cellular connection to the internet — plus the ability to make it play a sound for easy location, mark it as lost to lock its functionality and trigger a display of your contact information, or instantly get directions using Apple Maps.

It’s worth noting that macOS Catalina will add the “lock” feature for Macs with T2 security chips, including recent laptops and desktops, joining the many smaller iOS and watchOS devices that previously had the feature. Thoughtfully, Apple’s locking procedure not only prevents the device from being erased and reused by someone else, but also disables Apple Pay, so it can’t be used to make purchases until you retrieve it.

While AirPods, iPod touches, and iPads are also on the list of tracked devices, Apple TVs and HomePods registered to your iCloud account won’t appear. Yet.

Prior to this year’s WWDC, there was a rumor that Apple was working on its own competitor to Tile — the standalone device that attaches to a keychain or goes inside luggage, enabling anyone nearby with a Bluetooth connection and Tile app to help locate the item. Developers have already found apparent references to Apple’s version, “Tag,” in the Find My beta code, so it looks like it’s happening — the only questions are “how,” “when,” and “how much?”

Without confirming Tag’s existence, Apple appears to be answering the “how” part at WWDC by disclosing a cryptography solution that enables a new mode, Offline Finding. Even when not connected to a network, Apple devices running iOS 13, iPadOS 13, or macOS Catalina will use Bluetooth to emit a rotating public key that is passively picked up by all other Apple devices nearby, and relayed — with encrypted, anonymous location data — to Apple’s servers. Only the owner of the device will have the ability to see the device and decrypt the location. The more devices that run the latest Apple OSes, the bigger the location network becomes.

If you stop and think about that for a moment, the amount of device location data being shared by Apple devices is going to increase exponentially, and in the wrong hands, it could be at least as concerning as all the location data that Facebook, Google, and others have been harvesting. But if you trust Apple, the power of its network to find people and things could be huge, and all it would take to add tracking to a “Tag” would be Bluetooth hardware and a long-lasting battery.

I strongly suspect Tags are coming, quite possibly as soon as this fall. If so, they’ll probably be very small and thin, enabling all sorts of additional items to be tracked. Rumors suggest that you’ll be able to share a tagged item’s location with friends or family to help locate and retrieve it. Whether the batteries will be rechargeable or replaceable remains an open but very important question.

Pricing could, of course, be a problem. On the rare occasion Apple has marketed $20-$30 items in its stores, even if they’re iPod Socks, they tend to take off with fans of the company. At that sort of per-unit price, Apple Tags could become a runaway hit, but since we’re talking about Apple, there’s surely some way they could be sold for $50 or $100 a piece, at which point many people will just shrug them off. 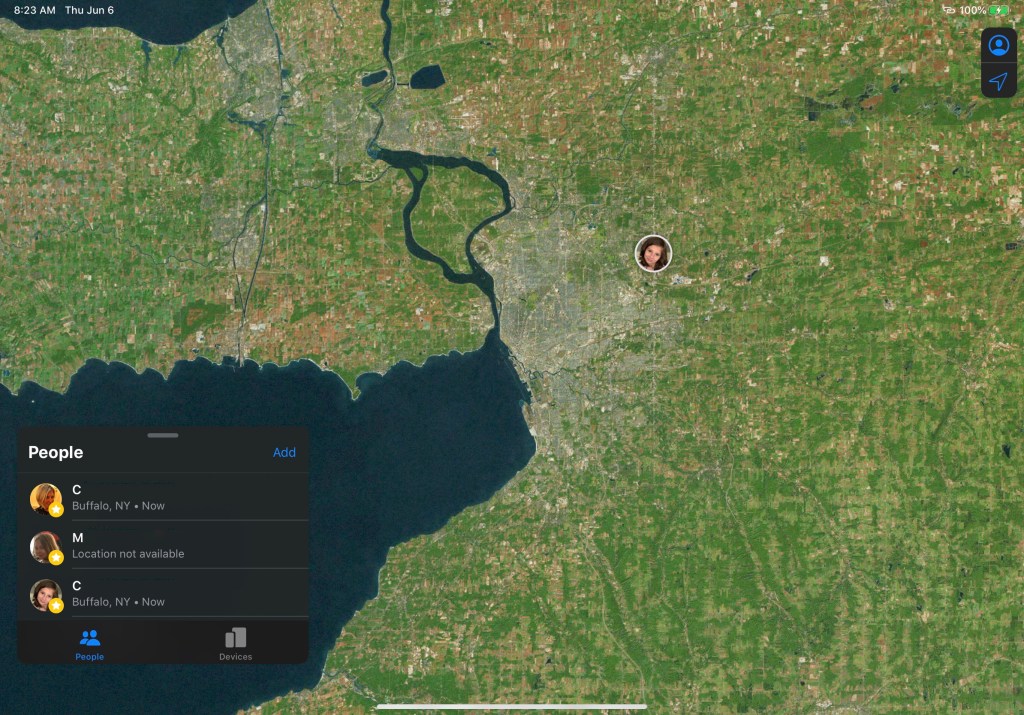 People: Find friends and family, let them find you

The other key feature in Find My is the People tracker, based on the old app Find My Friends. Selecting the People tab lets you see the locations of family and friends who have specifically opted into location sharing — something parents can do for young children on the same iCloud account, and adults with their own accounts can authorize or deauthorize at will. 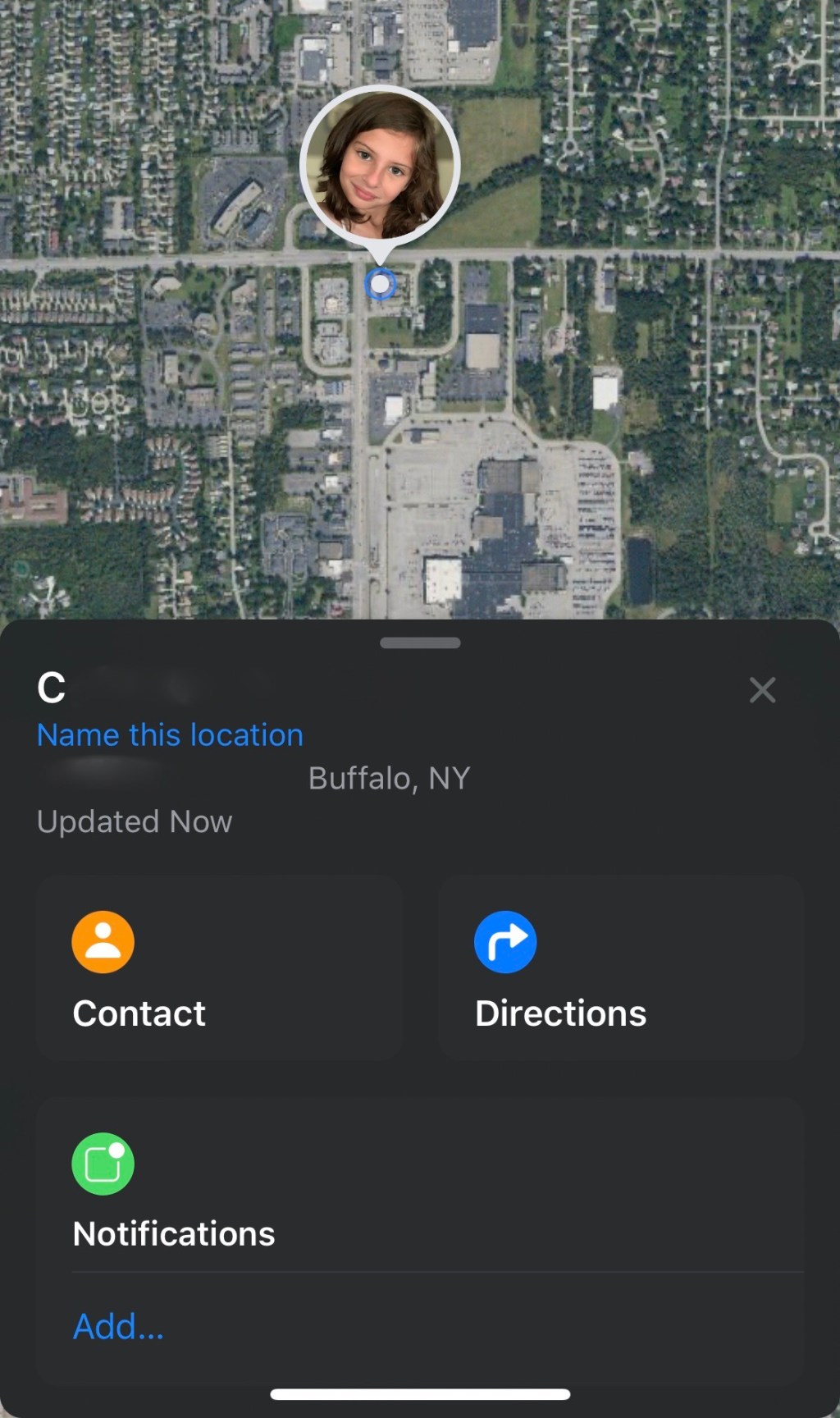 That last point is important: If you’re concerned about someone you know having continuing access to your location, you can disable sharing to that person, or turn location sharing off altogether. Otherwise, a person is tracked by the device he or she specifies, such as an iPhone, iPad, or cellular Apple Watch, and if you select a person, you can easily see them on a map, use contact information to reach out to them, or get directions to their current location with Apple Maps.

You can also set up notifications specific to that person — either for yourself about them, or for them about you. With this feature, you can let a family member know when you arrive or leave at a specific location, or receive a notification when your contact arrives or leaves a location. If the concept creeps you out for a specific person or generally, don’t share your location with that person, or at all. 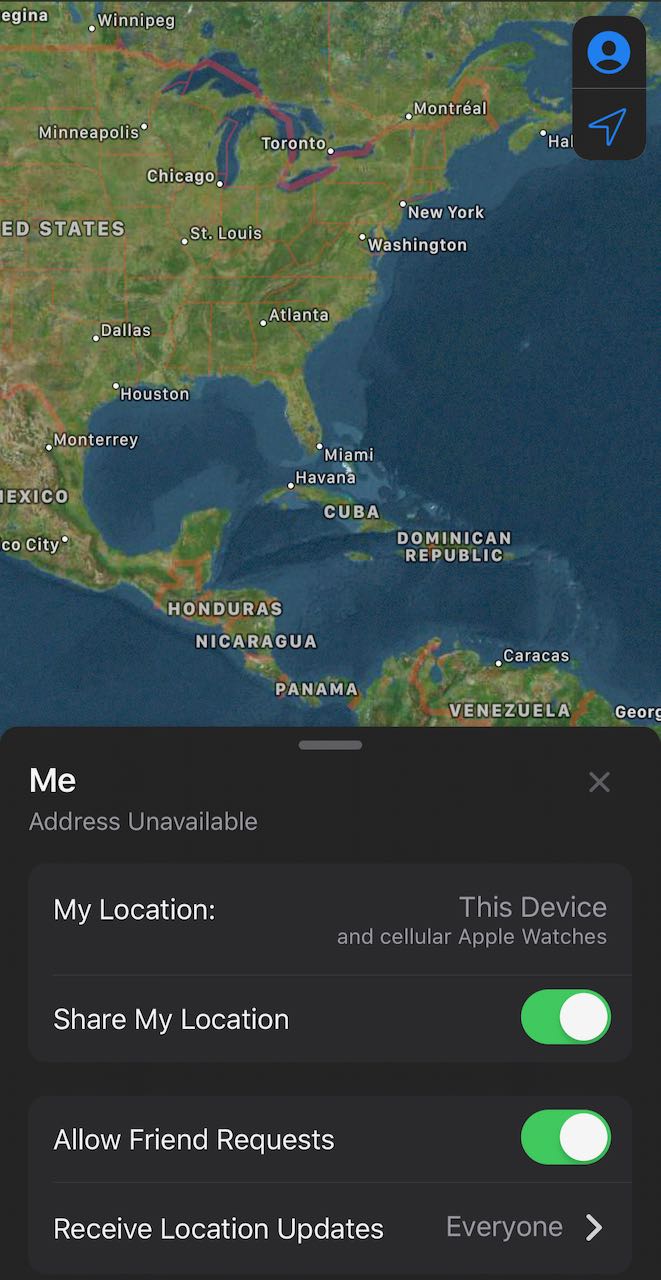 There’s also a “Me” feature that enables you to easily switch location sharing on and off for yourself, allow friend requests, receive location updates, and switch the map from photorealistic to shaded rendering. At the moment, Me doesn’t let you toggle which devices are being used to share location data; that choice is buried elsewhere in the device’s settings menus. 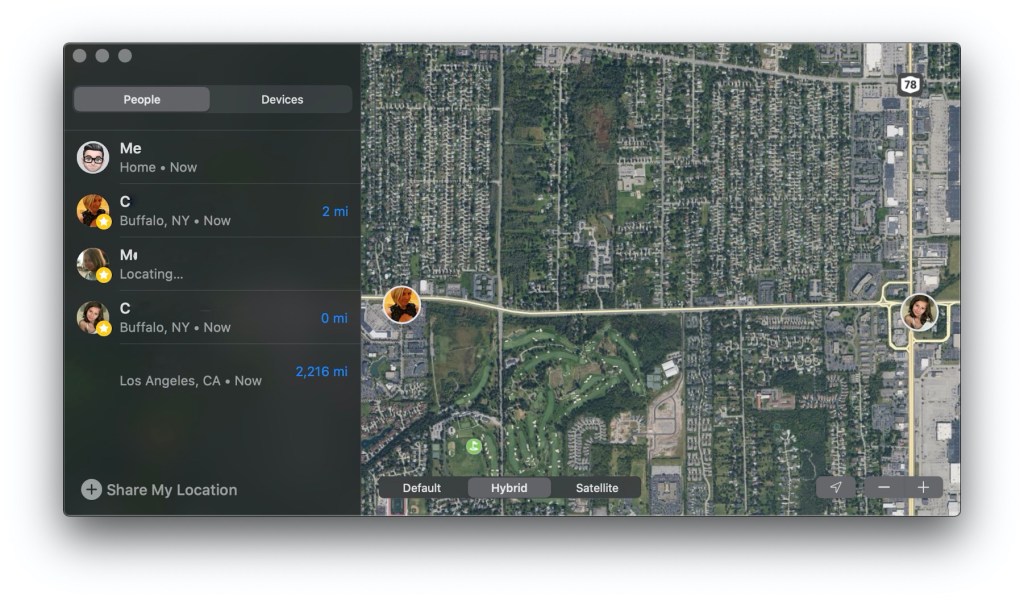 Find My is still in the earliest beta stages, and though the iOS and iPadOS versions are fairly stable, the macOS Catalina version I tried keeps crashing rather than loading. (Update: A system-wide iCloud login issue was preventing the app from running; fixing it enabled the Catalina app to load, as shown above.) If the Offline Finding works as expected come fall, Apple’s service is going to be better than ever.

I personally love that these features have been integrated into a single app, even though I think they could (and should) be integrated directly into Apple Maps — something Apple may not want to do, if only to increase the visibility of Find My as a standalone feature of its operating systems. Regardless, Mac users who have been stuck loading a web browser with iCloud to use Find features will be way better off with the dedicated app, and users of Apple’s tablets and pocket devices will find the new solution at least a little more convenient and powerful than before. If Tags appear later this year, Apple’s going to have another big hit on its hands, assuming they’re reasonably priced and as easy to use as they should be.