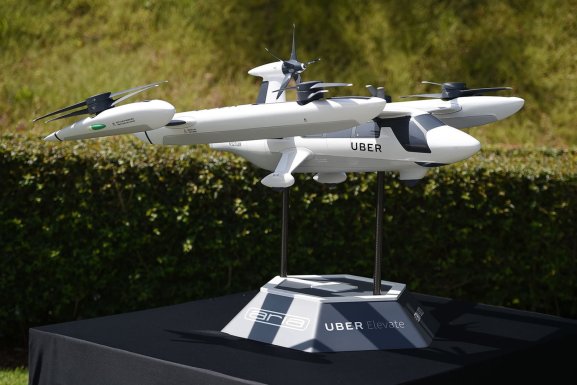 The next time you order pad thai from your go-to neighborhood joint, a drone might handle delivery duties. Uber announced this morning that this summer it intends to begin operating autonomous quadcopters in San Diego — one of the 10 cities selected by the Federal Aviation Administration to test commercial drones — pending regulatory approval.

It’s a project overseen by Uber Elevate, the ride-hailing company’s aerial R&D arm. In pilot tests earlier this year, Elevate orchestrated deliveries of McDonald’s meals up to a half-mile away, beyond the line of sight to customers on the campus of Viejas Arena at San Diego State University and surrounding areas. San Diego restaurant Juniper & Ivy, which doesn’t currently deliver, joined the program in May to offer an off-the-menu double-patty burger item.

Uber says its fleet of off-the-shelf drones will fly to designated landing zones, where couriers will pick up deliveries, all of which are packaged in custom-designed insulating containers. The drones might also land on the roofs of parked Uber cars marked with QR codes, which will transport the food to its final destination.

Compared with ground transportation, which averages 21 minutes for a delivery 1.5 miles away, Uber claims its drones can fulfill orders in about 7 minutes — and potentially faster once it deploys upgraded models that can reach speeds upwards of 70 miles per hour. Pricing will initially be consistent with Uber Eats deliveries, or up to $8.50 in San Diego.

Uber told Bloomberg that drone food delivery will take at least three years to roll out in a handful of markets and that in a decade, it’ll be prevalent enough to change restaurant kitchens. That’s in line with predictions by investment firm Cowen, which anticipates that over the next four years the food delivery market will increase 12% a year to $76 billion in 2022.

Uber’s announcement comes a week after Amazon revealed that its newly designed, fully electric, and completely autonomous Prime Air drone will begin delivering packages to customers. The retail giant’s six-propeller carrier is capable of vertical takeoffs and landings, and it’s able to carry parcels weighing as much as five pounds, which covers 75% to 90% of packages Amazon ships to customers today.

Amazon aims to eventually fulfill orders within 30 minutes for shoppers within 7.5 miles of some of its hundreds of warehouses around the world.

Already, companies like AT&T use drones for maintenance inspections and to assist in natural disaster zones, and dozens of local government agencies, like the San Diego Fire Department (SDFD), have begun actively deploying drones as part of the Federal Aviation Administration’s (FAA) unmanned aerial systems integration pilot program. Concurrently, telepresence drone piloting company Cape and others in the industry have begun to partner with first responders like the Chula Vista Police Department and San Diego Fire Department for field tests.