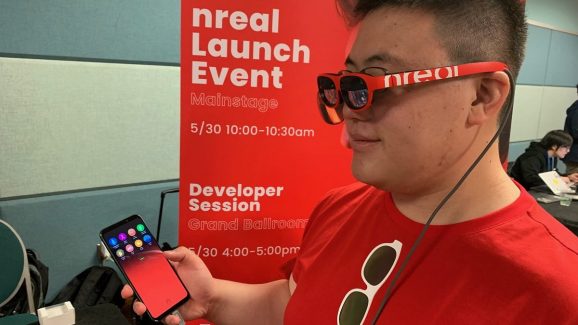 Nreal on display at the AWE event.

Chinese startup Nreal shocked CES attendees in January by revealing impressively compact augmented reality glasses that had serious potential to redefine the stagnant market for AR hardware. Now rival Magic Leap is accusing Nreal’s founder of stealing its proprietary information to rapidly bring the headset to market in competition with its own product, Magic Leap One.

As noted by Bloomberg, Magic Leap filed a federal lawsuit yesterday against Chi Xu and Nreal, suggesting that Xu used part of his 13-month employment with Magic Leap to pilfer secrets for a competing business in China. Magic Leap, of course, spent years teasing its development of a cutting-edge augmented reality headset before finally releasing Magic Leap One last year.

Though Xu left Magic Leap in 2016, well before the One headset’s launch, his former employer claims he neglected his duties so he could gather Magic Leap’s proprietary information. The Florida-based company is accusing Xu of breach of contract, fraud, and unfair competition.

While no company owns all the concepts behind AR glasses, there’s no question that the headsets include countless technology discoveries developed by many people over the past decade. Magic Leap specifically accuses Xu of leveraging its seven years and “hundreds of millions of dollars” of investments in “hundreds of engineers” to supposedly take Nreal from nothing to a functioning prototype in less than two years.

It’s unclear whether the lawsuit will hobble Nreal’s consumer launch of the Nreal Light headset, which was scheduled for later this year. At an aggressive $500 asking price, Light would be less than one-fourth the Magic Leap One’s current $2,295 MSRP, a savings achieved partially by relying on the purchaser’s existing Qualcomm Snapdragon 855 smartphone rather than a dedicated computing puck for much of its processing needs.

The original report notes that Nreal was started in Beijing, China as Hangzhou Tairuo Technology, and Bloomberg suggests that it’s yet another example of intellectual property theft from a U.S. company by a Chinese one. While that may be true, it’s also worth noting that large companies sometimes levy shaky accusations of IP theft against former employees to extract financial concessions from their subsequent startups, with final judgments and/or settlements varying based on a variety of factors. VR pioneer Oculus was famously sued and compelled to settle a trade secret case by Zenimax Media, the prior employer of key Oculus technologist John Carmack, who continuously denied wrongdoing.