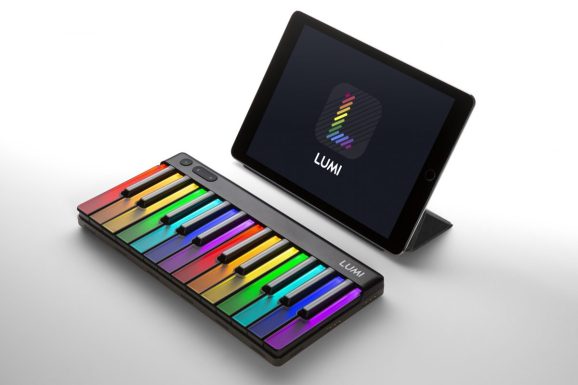 Roli, the London-based company behind high-tech MIDI controllers like Seaboard and Blocks, today turned its attention toward budding musicians with Lumi Keys, a fully illuminated and modular portable keyboard that weights less than an iPad Pro (1.3 pounds). It’s launching on Kickstarter, where it starts at $249 (€249).

Roli CEO Roland Lamb says that Lumi Keys were inspired by the sobering state of music education, particularly in the U.S.: Roughly 80% of adults who previously played an instrument quit by the age of 14, according to the Journal of Research in Music Education, and only 10% of American adults aged 18-29 have picked up an instrument in the past year. “Many people would love to play an instrument but worry that they don’t have the talent. Through our research, design, and innovation at Roli, we’ve come to believe that the problem is not a lack of talent. Rather, instruments themselves are not smart enough,” said Lamb.

The 24-key Lumi Keys can triple in size to up to 96 keys thanks to a proprietary magnetic connector that snaps onto additional units, and it’s compatible with the full range of accessories in the Blocks family. That said, Lamb says it was designed to be “dimensionally” small and compact enough to fit in a backpack (11 x 5.5 x 1 inches) and to fit custom-made first-party protective cases dubbed Snapcases. 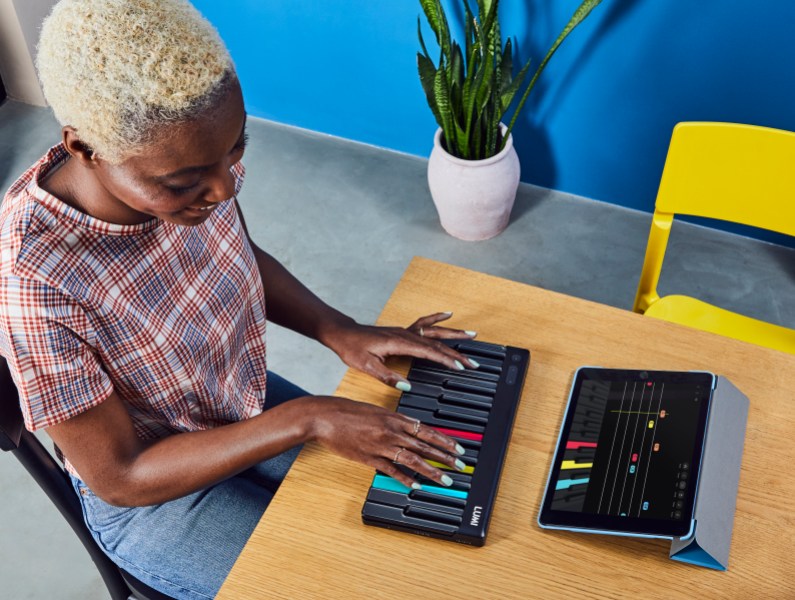 Lumi Keys feature what Roli claims are the brightest and “most saturated” RGB illuminated DS 5.5 keys on the market. They’re able to produce up to 10,800 millicandelas of light collectively thanks to the company’s in-house Brightkey technology, which distributes the backlights’ beams through a Fresnel-inspired lens design and confers the additional benefit of reduced power draw. Toward that end, Lumi Keys’ built-in rechargeable battery lasts up to six hours of continuous play.

The keys, speaking of, are designed to mimic those of a grand piano with a nearly identical plunge distance (within 92%), and they’re moreover designed to integrate with Roli’s Lumi companion app and with popular third-party digital audio workstations (DAWs) like Cubase, FL Studio, and Logic Pro X. Lumi Keys ship with Roli’s Studio Player, which includes a number of premium sound engines and over 100 sounds, and with a curated library of hundreds of songs available through the aforementioned Lumi app.

Within the Lumi app, players can play along with songs by following the keys as they light up one by one with the notes, or improvise as the chords in the song’s scale light up on Lumi Keys. Beginning instrumentalists are afforded the choice between simple (shape-based) and advanced (sheet music) written music views, and they can embark at their leisure on lessons covering scales, chords, playing techniques, and other music basics. 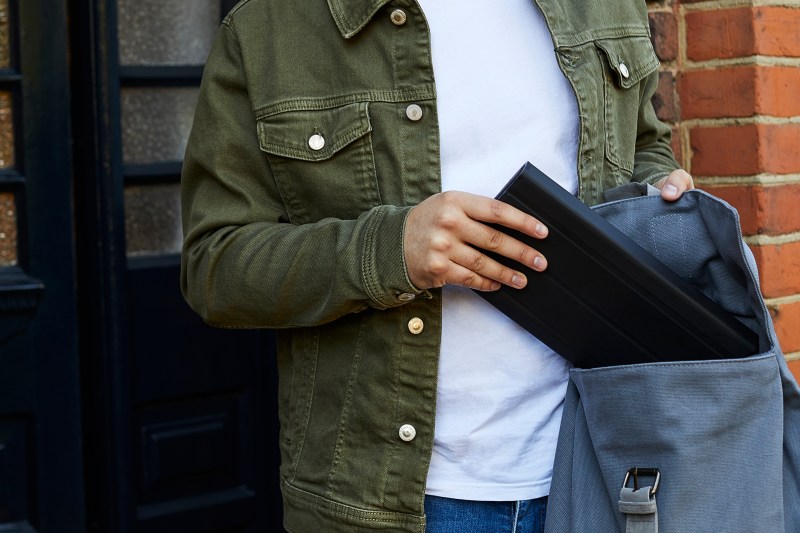 “What excites me most is that the intelligence of Lumi means that there’s something in it for everyone. On one hand, my own kids now prefer Lumi time to movie time,” said Lamb. “On the other hand, several of the world’s leading keyboard players can’t wait to use Lumi in the studio and on the stage.”

Lumi Keys is available for preorder on Kickstarter from June 18 to July 17, with an expected ship date of October 2019.

Roli, which was founded in 2009 by Lamb while a graduate student at London’s Royal College of Art, has raised $43.5 million in venture capital to date following a $27 million series B round in 2016 and debt funding from Kreos Capital. It’s based in the Dalston district of London, with offices also in New York and Los Angeles, and it sells its products in over 40 countries globally.