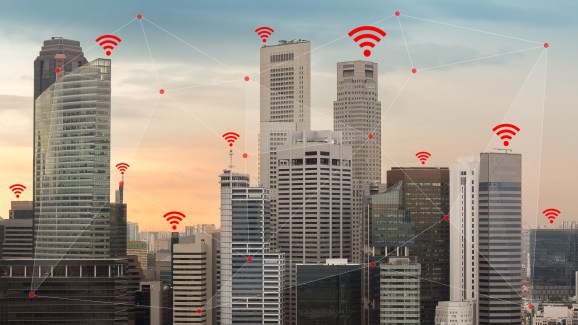 “At times, we … encounter extreme situations when there is no network coverage at all — for example, when you just  arrive at an airport in a foreign country or when you take an off-road trip or attend a concert, football match, or exhibition,” wrote Oppo in a press release. “[This] technology offers a solution to such scenarios in which other network connections are unavailable.”

Technical details were a bit hard to come by at press time, but here’s the gist: MeshTalk allows multiple devices to create decentralized local area networks (LAN) via signal relay, using what Oppo describes as a “customized” chipset. It supports LAN connections wherever Oppo devices are within range of each another, and Oppo claims its power requirements are such that most devices can maintain a network for more than 72 hours.

In this respect, MeshTalk isn’t unlike Apple’s Multipeer Connectivity framework, which enables iPhones to exchange data — photos via AirDrop, for example — without a cellular connection. It’s also not too far off from a 2013 proposal by engineers at Mitre, who described a “smart” ad hoc mesh that reconfigured smartphones’ onboard Wi-Fi chips to act as Wi-Fi routers with other nearby handsets. Yet another project — IBM Research and the Weather Company’s Mesh Network Alerts — leverages similar tech to deliver severe weather notifications to Android devices in a decentralized fashion.

Oppo is pitching MeshTalk as a solution for environments where reliable connectivity is hard to come, like the remote wilderness, and for apps that leverage medium-range data transfer to exchange location and authentication data. To this end, the company says it plans to further reduce MeshTalk’s power consumption and improve its stability and device capacity by boosting its transmission rate and signal strength.

“[I]magine a keyless future in which your smartphone opens your car and connects to payment devices at parking garages — or how the connectivity between smartphones and stores in a shopping mall will help deliver precise indoor navigation and highly personalized marketing,” wrote Oppo. “For example, when you pass by an Oppo store, you will be able to view the latest promotions.”

One thing’s certain: Mesh networking has captured the imaginations of investors around the world.

Just last week, GoTenna raised $24 million for a data-transmitting dongle that connects with other GoTenna dongles within a roughly four-mile range, and earlier this year Amazon snatched up Wi-Fi mesh network startup Eero for an undisclosed price. Samsung recently revealed that it’s leveraging AI-powered optimization tech from Plume to power its SmartThings Wi-Fi mesh system. And Helium, a startup founded by Napster cocreator Shawn Fanning, is developing a fee-free peer-to-peer network for internet of things (IoT) devices that rewards node operators with cryptocurrency.