Amazon’s decision to expand from its single base in Seattle has consistently been one of the most highly profiled recent stories in tech. Over 200 American cities applied, eager for the 50,000 new jobs and over $5 billion in construction investment. Stonecrest, Georgia even offered to create an adjacent town called Amazon. Amazon ultimately decided to split the prize between Long Island City in New York and Crystal City in Virginia — that is until public backlash forced it to pull out of New York.

Leaving the heated debate aside, Amazon’s shift to multiple headquarters hints at a broader trend — a more compelling story that the headlines have largely missed – the growing trend of a distributed workforce model.

More startups are using a distributed workforce model earlier in their lifecycle.

Mary Meeker’s latest Internet Trends Report shows for instance that 5% of the American labor force works remotely (nearly double the 3% in 2000), representing over 8 million Americans.  Astoundingly, nearly 50% of the US workforce has spent at least some time working remotely.

This dynamic is particularly acute among startups and small businesses. Many have commented on the rise of startups looking for remote workers, how remote workers are the new startup hub and the success of those that chose this path. Indeed, 39% of remote companies have fewer than 25 employees. Buffer’s State of Remote Work Report demonstrates that 90% of entrepreneurs claim they support remote work. Companies like Automattic, Basecamp, Github, Gitlab, InVision, and Zapier provide successful role models of companies relying on large distributed teams.

Some venture investors have gone so far as to say “Distributed teams are the new Cloud for Startups.” Perhaps Boris Wertz, founding partner of Version One and Board Partner with Andreesen Horowitz, summarizes this trend most succinctly: “Among our Silicon Valley-based portfolio companies, not a single company past “A” does not have a distributed team.”

What is this phenomenon, and why are startups pursuing this strategy?

Distribution refers to an organization where the team is dispersed across multiple locations. For startups, that might mean the technology development team and sales teams are in different geographies. Some startups choose to go a step further by becoming remote, where they may not have formal offices.

Conventional wisdom suggests that forming distributed teams is a bad approach for technology startups, as the integration of engineering, product development, and strategy is thought to be essential for spurring creativity. Steve Jobs exemplified this ethos, going so far as to place office bathrooms in a central location to catalyze spontaneous interaction among departments. When Marissa Meyer took the helm at Yahoo, an early directive was to ban remote work. While there are certainly valid reasons to avoid being distributed, times are changing.

One of the central advantages of distributed teams is the flexibility to access specialized talent, regardless of location. Building in a distributed manner allows companies to tap particular centers of excellence. For instance, while there is a shortage of machine learning programmers in the Bay Area, Toronto and Montreal are becoming hubs for this specific talent pool. Building a second location in one of these cities allows startups to tap that vein.

For example, one of my firm’s investments, Peek.com, is headquartered in San Francisco but built its inside sales division in Salt Lake City before even raising its Series B. As CEO Ruzwana Bashir explains it: “First, within a two-hour radius, there are multiple top universities with dedicated sales programs. Their students have worked with many of the great local enterprise technology companies. And given the love of outdoor activities, we also found a perfect cultural fit for our mission of connecting the world through experiences.”

Building remotely is perhaps the most extreme version of distributed teams. Zapier, a Missouri-based tech startup, was an early pioneer. Co-founder and CEO Wade Foster credits this approach with increasing the company’s ability to attract and retain talent. Its staff of 180 works across 25 states and 17 countries. In the first year since instituting its “de-location” package, the company saw its application rates and employee retention increase. It helps that workers also have an increasing preference for being remote, and feel comfortable working in distributed organizations.

Another significant advantage to distributed companies is the powerful impact on costs.

The Bay Area has the highest rents in North America and also commands some of the highest salaries. In many places in the U.S. and around the world, tech talent is much more affordable. The average engineer costs $124,000 in Silicon Valley versus $90,000 in Chicago and $75,000 in Cleveland. The cost advantage increases when going to places like Canada that also benefit from favorable exchange rates. 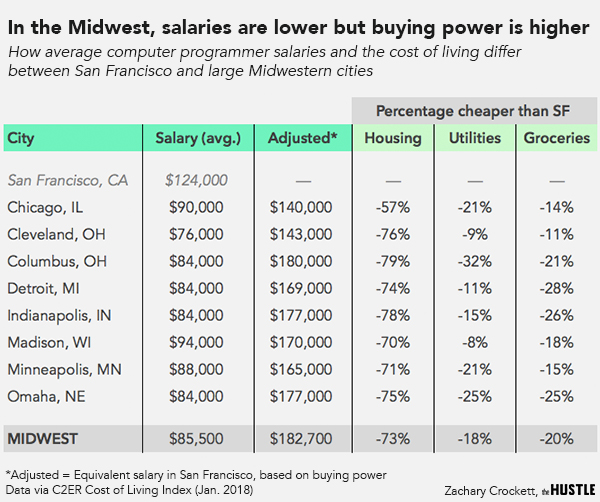 Reducing overhead costs can profoundly impact a startup’s viability. Early stage venture funding rounds are geared to help founders find product market fit, a process that typically involves a lot of learning and pivoting. At this stage, the largest cost for startups is salaries to support technology development. Lower salaries translate to more months of flexibility to experiment and grow. Perhaps it is no surprise that cities like Chicago have enjoyed some of the highest average investor returns in the U.S.

Today, technology is challenging the Jobsian notion that in-office connectivity is paramount and irreplaceable. For instance, Canadian founder (and friend of mine) Jasper Malcolmson built his company, Skylight, in 2016 in a distributed way with no official headquarters (or offices). As he sees it, “By being distributed, we’re actually even more connected.”

In his home, Jasper’s desk has two screens, a high-resolution microphone, and high-fidelity speakers. These come standard for all employees. On his left screen, he sees an array of live feeds of his colleagues at work. Whenever he wants to do a conference call, ask a question, or just say hi, he double clicks on their face to open a live microphone link (see below). “Open offices decreased barriers to in-office communication. In many ways, through technology, we’ve lowered them even further,” he told me. The technological stack to support distributed startups is only getting deeper. 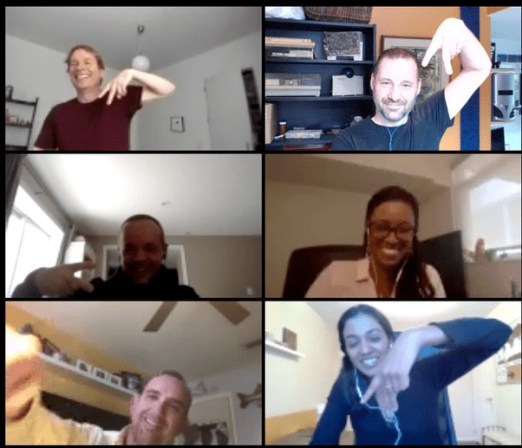 Where this leaves us

Though certainly not mainstream, distributed companies are no longer fringe, allowing them to access unique talent and decrease costs without compromising on integration. Counterintuitively, the strategy presents other more surprising advantages. For instance, building a distributed culture early on forces companies to build muscle on several key fronts, such as making communication a priority, trusting colleagues to act autonomously, and defining a strong culture. Expanding internationally requires the exact same skillset. Building a distributed organization can help companies scale internationally more effectively if they are already exercising these cultural muscles.

Alexandre “Alex” Lazarow is a Director at Cathay Innovation, a global venture capital firm based in San Francisco. He is a Chartered Financial Analyst (CFA), a Term Member with the Council on Foreign Relations, and an adjunct professor at the Middlebury Institute of International Studies.