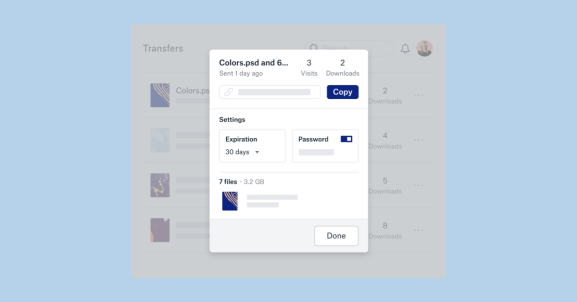 Dropbox has announced a new desktop file-transfer service that makes it easy to send up to 100GB of files to anyone using a simple link.

Dropbox Transfer, as the service is known, is available today in beta, though you will be added to a waiting list at first pending the company’s approval.

With Dropbox Transfer, the company will allow users to drag-and-drop files from their machine, or add items that are already stored in their Dropbox account (which will be quicker given that they’re already in the cloud). They will then be able to set an expiry date and password (which can be edited or removed at a later point) and share a link with anyone — regardless of whether they use Dropbox.

Alternatively, the sender can generate an email automatically from inside the Transfer tool, which will send a link to all the intended recipients. It’s also worth noting here that the recipient receives copies of the files, rather than getting access to the original documents.

Above: Creating a Dropbox Transfer

There are, of course, other similar tools out there, including the likes of WeTransfer and Mozilla’s Firefox Send. And Dropbox itself already allows users to share files with non-Dropbox users via a link, which also includes the ability to set passwords and expiry dates for paid users. But with Transfer, Dropbox is leveraging its position as a cloud storage giant to expand the scope of its service to existing customers, and will include additional features that will appeal to businesses.

For example, the sender can access stats, which show how often a link has been clicked on and how many downloads it has had, and they can also elect to receive a download notification each time someone accesses the files. 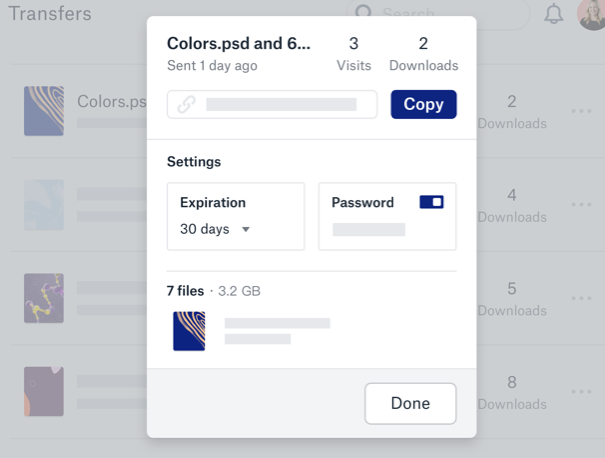 Companies can also customize the download page to suit their brand — adding their own images or logos, changing the background color, and more.

Dropbox confirmed to VentureBeat that the new Transfer tool will eventually be available to users on all plans when it leaves beta — however, the available features will vary. Basic (free) users will be able to send just 100MB with each transfer, with a 7 day expiration, while Dropbox Plus ($12 / month) subscribers will have a 2GB limit. Only those on a Dropbox Professional ($20 / month) plan will gain access to the full feature set, including 100GB of file transfers; expiration limits of 7, 30, and 90 days; customized branding; and transfer analytics. It will be made available to teams in beta in the coming weeks, too.

Ultimately, Dropbox Transfer is all about letting people send files without having to mess around with special permissions or worry about consuming storage in their online account — they just send the files, stipulate a password and how long the link should be accessible for, and that’s it.