Not to be outdone by Google, which recently launched AI-informed bus traffic delays and commute busyness estimates in Google Maps, Microsoft today highlighted a few of the improvements that have rolled out to Bing Maps over the past six months. They mainly involve real-time updates and trip frequency features, but also touch on alternate route recommendations.

Bing Maps on the web and mobile now offers real-time transit trip updates with information about delayed, on-time, and early arrivals for over 250 agencies in nine different countries, including over 100 agencies in the U.S. alone. Where supported, Maps provides information on how often a bus or train runs (e.g., “Bus 560 is scheduled to depart every 30 minutes”), and in Bing.com search results, it’ll surface alternate transit options when appropriate. If there’s only one bus route that’ll get you from place A to place B, for instance, you’ll see alternate transit route options instead of the bus’ next departure times.

“[We’ve] … been hard at work to improve the quality of mass transit routing,” wrote Bing Maps program manager Simon Shapiro in a blog post. “[Some of these are] super useful for when you need to time your departure to a transit stop.” 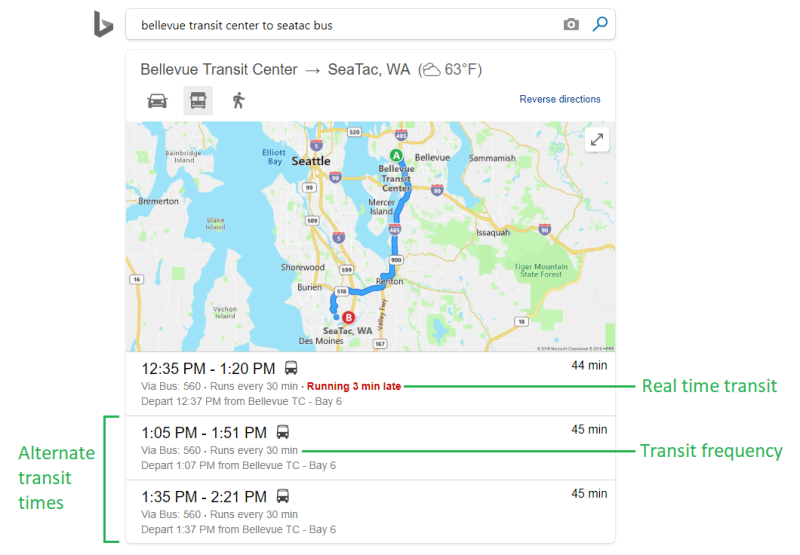 The enhancements come on the heels of 102,000 square kilometers of refreshed bird’s eye imagery spanning more than 100 cities in the U.S., and new images from traffic cameras nationwide along planned driving routes. In other news, Microsoft announced in early June that Bing Maps would power LinkedIn’s Your Commute feature, which allows users to see the estimated commute time for a given job posting, and in January, Bing Maps gained routing improvements for cars, trucks, walking and public transit.

These were joined by an updated Bing Maps software development kit (SDK) unveiled during Microsoft’s Build 2019 developer conference in May, which introduced a library for building Android and iOS apps and controls powered by a full-vector 3D map engine. It arrived alongside an API — Bing Maps Multi-Itinerary Optimization — designed to help drivers, planners, and dispatchers automate planning while optimizing their fleets, based on drivers’ shift schedules, service time windows, duration, predicted route traffic, and priorities.